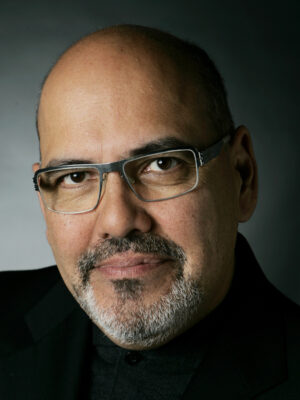 Here is the ‘life story’ the Columbia Missourian published in his memory.

MARK HINOJOSA came to the convergence faculty from The Detroit News, where he was Director of Interactive Media. There he led efforts to enhance the digital delivery of news and information. He presided over the integration of the print and web news teams, and developed the news operation’s social media strategy. Previously, he was the associate managing editor for multimedia for the Chicago Tribune. While there, Hinojosa filled the newly created position of A.M.E. for Electronic News, now Multimedia. In that role, Hinojosa worked as a liaison between print, broadcast and the Internet, facilitating the development of stories across these different media.

Hinojosa was a two-time Pulitzer Prize judge and had lectured both nationally and internationally on multimedia, newsroom convergence and audience engagement. He was also the Hearst Visiting Professional at Arizona State University’s Cronkite School of Journalism and Mass Communication.

A Los Angeles native, Hinojosa lived in Chicago, Kansas City and in three of the five boroughs of New York City. He held a bachelor’s degree in Mass Communication from Pepperdine University in Malibu, Calif. Hinojosa served on the boards of the National Association of Hispanic Journalists, the Online News Association and Street Level Youth Media, an organization committed to teaching media awareness to urban youth. He was also a founding board member of the Knight-Batten Awards for Innovations in Journalism.

He will be greatly missed.