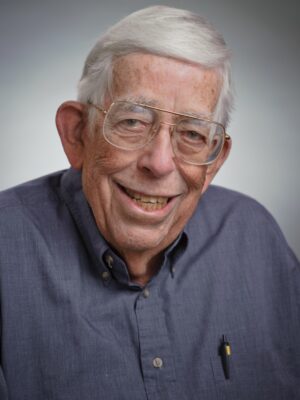 Professor Emeritus ROD GELATT has won several awards for his more than 45 years of distinguished service with the Missouri School of Journalism. He was inducted into the prestigious Gold Circle during the 35th annual Mid-America Emmy awards ceremony in St. Louis in September 2011. Gelatt was one of three veteran journalists with 50 years or more in the TV industry to be honored by the National Academy of Television Arts and Sciences.

Gelatt joined the faculty in 1963 and was director of news or public affairs for 22 years; first for the School’s NBC affiliate, KOMU-TV, and later for its public radio station, KBIA-FM. From 1980 to 1993, Gelatt produced and moderated KOMU’s Missouri Forum public affairs program, and from 1986 to 1992 he chaired the Broadcast News department. During those years he also coordinated annual judging for the Radio-Televisions News Directors Association’s Edward R. Murrow Awards and served as the school’s liaison to the committee created by the Missouri Supreme Court to draft guidelines for bringing cameras and microphones into Missouri courtrooms. In 1998 he initiated the Missouri London Program, the J-School’s most popular study abroad experience. In 1994, he created Views of the News, a weekly media-critique program on KBIA that he also hosted for 14 years.