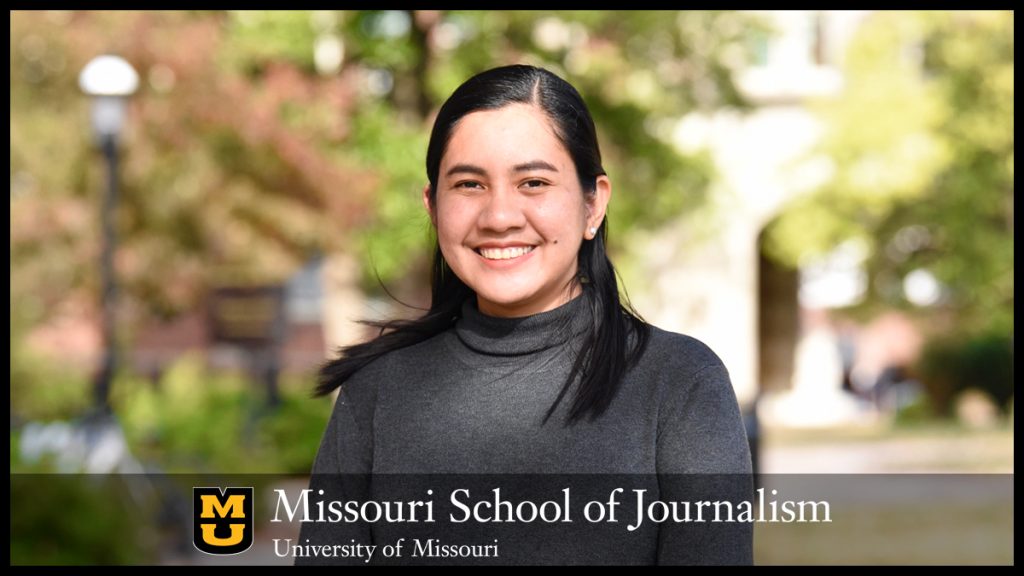 COLUMBIA, Mo. (Dec. 1, 2022) — Jene-Anne Pangue, a community and civic engagement specialist at Filipino digital news website RAPPLER, worked with Professor Kathy Kiely at the Missouri School of Journalism this summer to learn about promoting news literacy and trust in journalism.

Pangue arrived on campus in August on a Community Solutions Program Fellowship, a worldwide program that matches community leaders with organizations that can help them develop skills they can use to positively impact their communities. Her fellowship ends in late November after four months of hands-on work with Kiely to engage members of the public in the fight against misinformation and disinformation.

“It’s not just our role in journalism to fight disinformation; we need community, we need people to help us fight,” Pangue said. “We need a whole nation approach.”

As Mizzou’s first Community Solutions Program Fellow, her arrival was itself an example of the School of Journalism’s whole nation approach — one that dates back to the global perspective of the School’s founder, Walter Williams, who planted the seed of the hands-on Missouri Method in nations all over the world.

“We are in a world war for truth and freedom of thought,” said Kiely, the Lee Hills Chair in Free-Press Studies. “The fight is global, so our alliances must be too. That’s why Professor Mark Horvit, chair of our journalism professions faculty, and I were so pleased to welcome Jene-Anne here.”

The fellowship represented Pangue’s first-ever international trip, but she quickly threw herself into the community-centered work on which she cut her teeth in the Philippines, where she fact-checked webinars during the height of the COVID-19 pandemic. Coming off that effort, which reached tens of thousands of people in the Philippines, she wanted to learn about how to reach new audiences at a time of heightened distrust in public institutions and the media.

“It’s not just our role in journalism to fight disinformation; we need community, we need people to help us fight. We need a whole nation approach.”

One of her efforts at Mizzou offered an opportunity to do just that at a listening event in Moberly in early October, when student journalists at KBIA — the School of Journalism’s NPR member station — partnered with their peers at the Columbia University School of Journalism to hear from community members about their views on the media and other issues.

Pangue assisted with outreach efforts to bolster the session’s turnout, making phone calls and committing to the sometimes slow process of gaining citizens’ trust in the rural town of 14,000 people. (By comparison, she hails from Tacloban, a city in the northeast Philippines with a population of more than 250,000.)

“It was helpful to have that experience,” she said. “When I tried to get them interested, I had to make it clear what is in it for them. …The digital landscape in the Philippines is polarized just like in the U.S. Little did I know — I thought it was a lot better here. I realized we basically fight the same battle.”

Though an important goal of the fellowship is to give fellows tools and skills they can take back to their home communities, the program also aims to foster a collaborative atmosphere of mutual exchange and benefit, a responsibility that Pangue took to heart.

“In addition to her work with me, Jene-Anne made time to talk to classes about her experience in the Philippines and to our Asian American Journalists Association,” Kiely said. “Mizzou learned as much from her as she learned at Mizzou.”

Pangue’s dedication reflects her understanding that the stakes are very real in an era when some members of the public feel increasingly emboldened to harass and intimidate journalists. She plans to use the lessons learned from her experiences at Mizzou to implement a community action program back in Tacloban, a task that represents the last leg of the fellowship, which officially ends in June 2023.

“At my workplace [in the Philippines], we are being threatened and attacked,” Pangue said. “We get people calling us ‘fake news peddlers.’ We have to tell people that’s a lie. We have to do something about it — we can’t just let it be. As journalists, we aren’t used to being the story, but we have to defend ourselves and advocate for ourselves.”