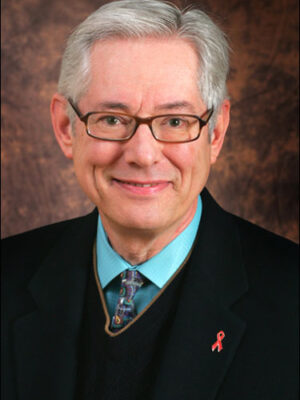 For a man who always had a knack for words, Bill Tammeus, BJ ’67, could only utter one after finishing the letter: “Wow.”

The letter came from a mother in central Illinois whose son had recently died from leukemia. It explained that a column she had read in The Kansas City Star touched her so profoundly that she had the words read aloud at her son’s funeral.

Tammeus, who worked for The Kansas City Star for 36 years, was the author of that article and numerous others that have stirred readers’ emotions and thoughts. Though he formally retired from his editorial position in 2006, he continues to reach audiences through various journalistic mediums.

“Retirement is sort of a figment of someone’s imagination,” Tammeus says. “It’s really been just a transformation into new stuff for me.”

This transformation has led him to his current work for three different publications. He is a monthly columnist for a national independent magazine, the Presbyterian Outlook. He writes a daily blog on The Kansas City Star’s website called “Faith Matters,” and he is a biweekly columnist for the National Catholic Reporter.

“All of that just falls under the title journalist,” he says. “I don’t know what else to call myself.”

The Journey to Journalist

From an early age, Tammeus knew he had a passion for language.

As he grew, so did his love for words. Tammeus’ high school journalism teacher encouraged and challenged him to pursue his passion for writing. However, it was his guidance counselor who introduced him to the Missouri School of Journalism.

“It was one of the oddest things,” Tammeus says. “Early in my senior year, I was walking down the hall of my high school and the guidance counselor, who was a nice man but he didn’t know anything, called over to me and said ‘Bill, come here. Where are you thinking of going to school? What are you interested in?’ And I said, ‘Journalism.’ He said, ‘Go to the University of Missouri – it is the best and oldest journalism school in the country.'”

Tammeus was wary of any advice from his counselor, but he was curious if the claims about MU were true. After finding information that confirmed his counselor’s recommendation, Tammeus convinced his parents – both University of Illinois graduates – that the Missouri School of Journalism was the place for him.

Lessons at the Missouri School of Journalism

Tammeus came to MU in 1963 and spent the next four years embracing the Missouri Method, a hands-on approach to learning that makes the Missouri School of Journalism unique and innovative.

Lisen received her bachelor’s and master’s degrees from the Missouri School of Journalism. Kate earned

her bachelor’s and master’s degrees in education from the University of Missouri-Kansas City.

Tammeus fed off the challenging environment.

“There is a general atmosphere of excellence at the J-School,” he says, “in which you knew you were a part of something special, and you knew the only way to take full advantage of that was to work really hard.”

And so, he worked hard.

He spent 14 to 16 hours a day at the journalism school. During the day, he attended classes that educated him on different aspects of journalism. In the evenings, he applied his knowledge to projects that provided applicable experiences for his career.

After graduating from MU, Tammeus took a job at a Gannett newspaper in Rochester, New York. He worked for three years reporting on race relations and urban dynamics before leaving to work for The Kansas City Star to cover similar topics.

It was during this time with the Star that Tammeus saw the impact his writing could have on a community. In 1975, Tammeus did three series of stories on flaws within Kansas City, Missouri, that were leading to urban decay. The first series focused on banks that were red-lining areas in central Kansas City, making it impossible for people in those areas to get conventional mortgages.

“Out of that and what some others were doing in other cities, we began to get federal legislation that required banks and other lenders to not red line,” Tammeus says.

These types of stories that brought about change were most satisfying to Tammeus.

“It was the kind of information that nobody was going to give you,” he says. “You had to really dig it up and analyze it and present it. And, I thought it was helpful to the city.”

After working as a reporter for many years, Tammeus was presented with an opportunity for change in 1977.

He was assigned to write the obituary of Bill Vaughan, an editorial page columnist for the Star. For 31 years, Vaughan had written the Starbeams column, which at the time was the oldest continuously published column in the country. It ran in the first issue of the Star and had been a staple in the newspaper ever since.

As Tammeus researched information for his colleague’s obituary, he learned more about the column and became convinced that the paper could not let it go. When he approached his editors with a plea to let the column live, they posed one question, “Who will write it?” Tammeus responded, “Why don’t you let me try?”

They took the chance.

“I took over the Starbeams column with the understanding that if I didn’t like it after six months and they didn’t like it, well, heck, I would do something else – probably sweep floors,” Tammeus says.

As he stepped in to his new columnist role, Tammeus felt prepared to take on the challenge. He soon discovered, though, that following in the footsteps of someone who was loved and revered was going to be difficult.

At first he compared himself to Vaughan, who was nationally syndicated and, as Tammeus put it, “a comic genius.” However as he became more comfortable with his new position, Tammeus realized that readers were happy to have the column live on under his authorship.

The six-month trial period passed, and Tammeus proved to himself and his editors that he could excel as a columnist. He went on to write the Starbeams column for 27 years.

While writing the Starbeams column, Tammeus would often complain to his editors that they did not give enough resources to covering religion.

Tammeus grew up Presbyterian, but walked away from the church at the end of high school after coming to the conclusion that “it was a place full of hypocrites.”

During his time away from church, he never lost interest in what he terms “the eternal questions.” Tammeus was intrigued by theology and continued to search for answers.

After a hiatus that lasted more than a decade, Tammeus returned to church. He realized that the people he had called hypocrites were more similar to him than he originally thought. They all needed help.

“I needed to be back in a hospital for people like me, which is the church,” he says.

His personal journey back to his spiritual roots prompted a desire to explore questions of faith with his readers. He appealed to his editor for more thorough religious coverage. His editor responded by asking Tammeus if he would be willing to give up the Starbeams column to move to the faith section where he could help boost readership and explore more of those eternal questions he enjoyed. In 2004, Tammeus accepted and transformed his column.

“I began writing more serious columns in addition to the humor columns,” he says. “I really tried to look at the world through my theological lenses, which doesn’t mean my columns were preaching Presbyterian sermons. That wasn’t the point at all. I was trying to draw long-lasting, eternal meaning out of what I was seeing in the world and giving that back as a gift to my readers.”

These more serious columns were turned into Tammeus’ first book, “A Gift of Meaning,” which was printed by the University of Missouri Press in 2002.

From Columnist to Author

His faith column led to another book opportunity when he met Rabbi Jacques Cukierkorn through a series called “Conversations with Clergy.”

It was 2004, and Cukierkorn had just returned from a trip to Poland. While on his trip, he met Irena Sendler, a woman who had saved 2,500 Polish Jews from the Holocaust. When he returned to America, Cukierkorn called Tammeus with a proposition.

Cukierkorn expressed his concern that if someone did not record the stories of rescuers like Sendler, then they would soon be lost forever. He then asked Tammeus what would be a life-changing question: Would he help record these stories?

The subject was enticing to Tammeus. Not only was he curious to discover the roles of his German ancestors during the Holocaust, but he also realized the importance of telling the stories of these rescuers.

However, he knew that the only way he would have the time necessary to dedicate to the project would be to leave his job. When he told Cukierkorn that he would have to retire to write the book, Cukierkorn responded, “So, retire.”

And so, Tammeus retired.

The pair worked on the book for four and a half years. In 2009, the University of Missouri Press published “They Were Just People: Stories of Rescue in Poland During the Holocaust.” The book is a compilation of stories from 20 different survivors and some of the families that helped them survive the Holocaust.

“Being given the trust by these families to tell that story was very satisfying, and in the end they were pleased by what we did,” Tammeus says.

Looking on the Bright Side

Tammeus’ many jobs as a columnist, blogger and author have given him the unique opportunity within journalism to regularly express his opinion to spur on conversations.

“You disclose who you are and let people put it in that context for themselves and decide whether you make any sense or whether you’re an idiot,” he says.

Sometimes his opinions are not received well, but Tammeus does not get caught up in negativity. He has developed a thick skin against harsh comments and has a unique way of interpreting the reactions of readers.

“I’ve been called all kinds of names including good ones,” he says. “Inevitably you stir people up. I’ve been condemned to hell in various ways and made people angry, but I’ve also made them think.”

When Tammeus writes, he is faced with the challenge of conveying a message that will impact his audience beyond the time it takes them to read his work. Realizing the lasting impression of his writing, Tammeus carefully considers the weight of each word he uses.

Tammeus knows each time he successfully puts words together on a page in just that right way, he has the ability to make people think, make people feel and make people change their minds. And ultimately, that has been the thrill of a lifetime in the life of a journalist who understands the power of words.

Kelsey Hoffmann is a senior from St. Louis who is receiving her degree in strategic communication with a business minor. She interned during the summer of 2014 in the cause-marketing department of The Richards Group in Dallas. She also has worked at many nonprofits, including The United Way of Greater St. Louis, The Radler Foundation and Live58. Hoffmann has volunteered in the marketing department of two Columbia-based businesses – Newsy: Multisource Video News and Boone Hospital Center. After graduation, she plans to continue pursuing a career in nonprofit public relations.