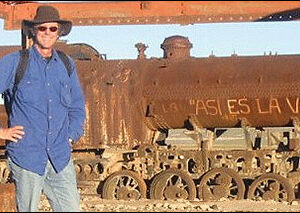 Bruce Kleiner, MA ’89, is always ready for a new adventure. With 22 years clocked in at the U.S. State Department as a public affairs officer, he has worked in almost a dozen embassies around the world, from Ethiopia to Pakistan to Romania. Currently stationed in Havana, Kleiner’s wanderlust never lets him stay in one place for long.

“I had this huge hunger to go overseas and see the world,” Kleiner says of his interest in diplomatic service.

While working in a foreign country was on his radar from an early age, Kleiner’s path to diplomatic service resembles not a straight line but rather a winding road full of detours and roundabouts. He is proudly a man without a plan, pursuing interests as they present themselves. Those interests have led him to travel solo around the world, study for and launch an impromptu journalism career and ultimately land in a foreign country doing work far different than what he envisioned when he started his journey more than 35 years ago.

The First of Many Detours

Born and raised in St. Louis, Kleiner headed to college at Georgetown University in the District of Columbia, graduating a semester early in 1978 with a Bachelor of International Relations degree. The program helps prepares leaders for foreign service. Kleiner was young and not quite ready to settle down with a full-time job, instead deciding that he wanted to see the world. To make his post-graduation adventure possible, Kleiner worked as a bike messenger and saved money to travel abroad.

Six months later, while the rest of his peers from the School of Foreign Service were moving into prestigious law schools and post-graduate programs, Kleiner was traveling alone across North America, Europe and Africa, even hitchhiking through the Sahara Desert from Morocco to Ghana. His first real adventure was freeing, and it left him with vivid memories that are awe-inspiring even today.

“One morning in Algeria I got up before dawn and took a city bus right to the south edge of the capital, and literally the asphalt ended, and the sand began. It was just an empty stretch, perfectly flat,” he says. “It looked like the surface of the moon.”

Two years later, Kleiner returned home from his travels. Having not yet completed the rigorous Foreign Service examination process, diplomatic service wasn’t an immediate option. In need of a job, he took a position that would eventually lead him to a journalism career. The position, with an independent production company that specialized in documentary film, initially involved him carrying equipment and setting up lights, but he quickly learned how to shoot and edit video. It was here that he fell in love with news.

“I was always very interested in politics and social sciences,” Kleiner says. “It was actually the material of news – of serious, hard news – that really interested me.”

Following that interest, he became a freelance cameraman and editor in the Washington area. His newfound abilities capturing news stories on film earned him White House press credentials during the Reagan administration and gave him the opportunity to record interviews with diplomats on Capitol Hill.

Though Kleiner stayed within U.S. borders during this time, his wanderlust never diminished. He found reasons to travel from coast to coast, often between video editing studios. At one point, he took a complete break from work and spent two months camping alone in Yosemite National Park, which is still one of his favorite spots in the country.

Shortly thereafter, Kleiner stumbled upon his next professional adventure. His talents behind the camera were recognized by an NBC affiliate TV station in Fresno, California. The station hired him as cameraman and editor, and it was where Kleiner got his first taste of real reporting.

“My foray into journalism was a bit accidental, but you never know exactly how your life is going to play out,” he says.

His four years in Fresno intensified Kleiner’s interest in journalism, prompting his next move. With plenty of journalism experience, Kleiner knew he could be a really good reporter, but he had no formal education to subsidize his experience. Earning a master’s degree in journalism seemed a logical next step.

While researching graduate schools with the best journalism programs, Kleiner was delighted to see the Missouri School of Journalism at the top of every list. The decision was easy. He hadn’t lived anywhere near his family for over 12 years, and it was time to go home.

Being a Missouri Journalist

As a graduate student, Kleiner worked to pay his way through school. In the beginning, he held odd jobs, from cutting lawns and shoveling snow to driving a school bus. He later became a teaching assistant and worked part-time at the news stations of KOMU-TV and KBIA-FM radio. The ability to work for real news outlets as a student was something that originally drew Kleiner to the Missouri School of Journalism.

“I appreciated the Missouri Method because those of us who came in with more experience, we sort of evolved as journalists,” he says. “I knew how to do all the shooting and editing, but what I was really learning at Missouri was reporting tactics and broadcast management.”

Kleiner spent a lot of his time editing at the analog video machines, but he also reported on several major events in mid-Missouri. Some of his best memories include covering the Michael Dukakis 1988 presidential campaign, seeing Jesse Jackson and interviewing Missouri governor John Ashcroft, who would subsequently become the U.S. attorney general during the George W. Bush administration.

“Some of the best years of my life, if I look back, were at the University of Missouri,” Kleiner says. “It was a very special time.”

Kleiner graduated with a Master of Arts in Journalism degree with an emphasis in broadcast and was immediately hired to be the national assignment editor at CNN’s headquarters in Atlanta. His main responsibilities were deciding which stories would be covered, working with affiliate stations across the country, reserving satellite time and generally managing the minute-to-minute operations of a 24-hour news network, one of only a few in the U.S. at the time.

“It was an extremely high-pressure job but interesting, too,” he says. “It was like being the ringmaster in a three-ring circus – very fun but very stressful.”

True to his adventurous spirit, Kleiner was at CNN a little more than a year before he needed a change, becoming the outdoor adventure reporter at an NBC affiliate in Boise, Idaho, where he stayed for three years.

“I loved being a journalist, but being a TV reporter is very challenging in terms of income security,” he says. “I think in the back of my mind I always had an idea that I’d like to live and work as a diplomat, so systematic employment overseas was an attraction.”

While working at the top-rated news station in Boise, Kleiner completed the Foreign Service examination process and immediately chose to join the U.S. Information Agency, a branch of the diplomatic service dedicated to media and community outreach. It was the best of both worlds for a man who loved journalism as much as he loved public service. The USIA merged with the State Department in 1999, becoming the Bureau of Public Diplomacy and Public Affairs.

Public affairs officers work with the press, monitor the media and attempt to understand how news is reported and how news organizations operate in foreign countries. They also pay attention to the host nation’s attitudes toward key issues of interest to the U.S., using polling and other research strategies to measure public opinion.

“My understanding and work experience as a journalist has informed my work as a diplomat because I’m now doing interviews on the other side of the camera, trying to bring information to journalists,” he says.

Working on both sides of the lens has helped Kleiner excel at building relationships between the media and the embassy, a skill Kleiner is currently using in Havana.

“We’re definitely in the midst of an historic process right now rebuilding trust, constructing institutional ties for the first time and figuring out how we’re going to work together,” Kleiner says about recently restored diplomatic relations between the U.S. and Cuba. “There’s a long and tangled history between our two nations.”

No stranger to the complexities of government work, Kleiner realizes that his background in journalism leaves him in a complicated position.

“The biggest professional challenge I face is trying to assist journalists in acquiring information from an organization as big and complex as the U.S. government,” he says. “As a former journalist and certainly as a Missouri journalism grad, my default mode is to divulge as much as I know and be as forthcoming as I possibly can, but I am constrained by a lot of internal U.S. laws.”

Kleiner may not be a reporter anymore, but his role in public affairs allows him to combine his three loves: journalism, public service and adventure.

“Working in press and culture for embassies overseas seemed very attractive, and while not classic journalism, it is very close to journalism in many ways substantively,” he says. “I’m so grateful to have been able to do both.”

Rachel Moore, a junior from Dallas studying strategic communication, expects to graduate in May 2017 and immediately pursue an MBA. She has interned with Monsanto Europe and dreams of starting a consulting firm with her best friend. Until then, she plans to find a job in public relations in the Pacific Northwest and continue to travel random places, rarely with a plan but always with her trusty Jansport backpack.