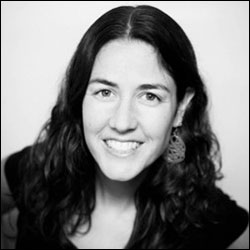 Coburn Dukehart, MA ’03, received her first camera when she was 10 – a brand new Yashica point-and-shoot. Armed with this mysterious and new, exciting piece of equipment, Dukehart set her sights on capturing a close-up of a pink flower she saw while vacationing in Rehoboth Beach, Delaware. Dukehart centered the bright petals glistening in the sun in the viewfinder for what appeared to be a perfect photo. The print, though, showed a blurry pink blob instead of the crisp blossom she had seen so clearly.

Only later, while taking basic photography classes did Dukehart learn about focal range. The point-and-shoot simply couldn’t focus that close. Now a senior photo editor at National Geographic, Dukehart has worked to perfect her photographic and editing techniques, which included graduate studies in photojournalism at the Missouri School of Journalism.

In 1998, when Dukehart got on a boat to the Aran Islands in Ireland she had no idea she would get off of it with a new career path in mind.

After graduating from the University of Wisconsin with a dual major in English and journalism in 1997, Dukehart was doing an internship in London at a scientific publishing company when a chance encounter changed her direction. Traveling in Ireland on vacation, Dukehart met a young woman and her mother who happened to be on the same boat during a day trip from Galway to the Aran Islands.

“They saw that I was there by myself, and they adopted me for the day,” Dukehart says. “She was taking pictures with her camera and talked about being in school for photography.”

The things the young woman told Dukehart about her school in New York made Dukehart reconsider the kind of storyteller she wanted to be. Dukehart realized in that moment that rather than becoming a print journalist, she wanted to use photos to tell stories.

Dukehart’s job at the publishing company in London was only temporary and when the six months were up, she returned home to Washington, D.C. It was difficult for Dukehart to return to the States because she had really enjoyed her time in London. She found solace in photography classes that she took at a local community arts center.

“Taking the photography classes that summer was the one thing that was fun for me and that I did for myself,” Dukehart says.

One of the first classes Dukehart took, “F-Stop, Shoot and Shutter,” gave her the basic skill and knowledge set she needed to explore the craft. Her interest in the area continued to grow.

As Dukehart continued to develop as a photographer, her father, a videographer at the local CBS news station, introduced her to his friend Astrid Riecken, a photojournalist at The Washington Times. Riecken invited Dukehart to shadow her for a couple of days.

“I was completely terrified,” Dukehart says. “Astrid set me up with this photo editor at The Washington Times, and I showed him my portfolio. In one of my photos, I had printed the negative backwards by mistake. It was embarrassing, but I still remember being inspired enough by that day to apply to Missouri.”

Dukehart had gotten the idea to apply to the School of Journalism from Riecken, who had told her it was on of the best places to study photojournalism. After a move to Boston for a year where she worked doing graphic design for a wine wholesaler, Dukehart decided to apply to Missouri and was accepted. Armed with the basic photography skills and knowledge she had picked up in D.C., Dukehart made the move to Columbia to begin her graduate studies and her next great adventure.

Welcome to the Missouri Method

When Dukehart first arrived at Missouri, she sat quietly in the “photo bubble” of the Columbia Missourian newsroom taking in all of her surroundings. Surrounded by the hub-bub of the newsroom, she wondered how she was going to fit in.

She quickly learned that photojournalism is about more than making nice pictures. It is also about working well with both your subjects and colleagues and, at all times, being professional.

“Ethics was a big thing that the J-School focused on, as was having respect for your subjects,” Dukehart says. “Missouri was always trying to teach us that you have to respect and trust the people you are working with or they are never going to trust you. Journalism is such a small community that if you disrespect a member of the community, it doesn’t just reflect badly on you, but on the School overall.”

Dukehart learned just how small the journalism community is during the networking opportunities she had while at the school. One such opportunity was the 2002 Missouri Photo Workshop in Fulton, Missouri. The annual Missouri Photo Workshop brings an international mix of newspaper photographers, magazine photographers, photo editors and photojournalism students together in an intensive workshop atmosphere. Many highly respected people in the field, including MaryAnne Golon, Randy Olson, Melissa Farlow, Randy Cox and Dennis Dimick, travel to Missouri to teach working photojournalists during the weeklong workshop.

Dukehart had been a member of the Missouri Photo Workshop student crew in 1999, and after a two-year hiatus from graduate school, where she moved to New York to work in corporate publishing, she returned to Missouri in 2002 and served as the student coordinator for the workshop. There she reconnected with a photo editor she had met during her first time attending – Mike Davis, who was then working as a photo editor at the White House.

Dukehart expressed interest in a photo editing internship to Davis and after many logistics were sorted out, including a significant background check, in the spring of 2003, Dukehart was on her way to the White House.

“Mike was so kind, and he took me under his wing,” Dukehart says. “To be honest, they didn’t actually need me there. But Mike took an interest in me and would always show me what he was doing.”

Dukehart worked in the White House photo office on news releases and Web photo galleries under the direction of Davis and photo editor Lynden Steele. She also assisted with the distribution of the “grip and grin” photos – images showing President George W. Bush shaking hands with members of the general public.

During her internship, Dukehart stayed enrolled at Missouri through the “Washington Program” overseen by Wes Pippert. She used the semester to research and write her master’s project: an oral history with the president’s photographer, Eric Draper. This involved multiple sit-down interviews with Draper, which she recored and transcribed. She then compiled a written report, paired with memorable photos taken during Draper’s tenure. This included images from Sept. 11, 2001, as well as other intimate “behind-the-scenes” images of the Bush presidency.

Although the White House internship was a coveted one, Dukehart learned through this experience that some work environments just weren’t a good fit for everyone.

“I had a hard time just showing up to work in the White House,” Dukehart says. “I feel like there are people who were made to work at the White House. They have a nice wardrobe and nice shoes but I am not that kind of person. I had to borrow a wardrobe from my cousin, and I felt like I was wearing a costume.”

After Dukehart finished her internship in the White House, she defended her master’s degree that summer. With the knowledge she had learned about the White House and herself, she set out to find where she fit and what her next move would be.

Finding Her Own Way

Directly following her internship at the White House, Dukehart landed a photo editing internship at WashingtonPost.com, where she interned for the summer of 2003, and was later hired on part time. Though intense at times, she immediately realized it was a better fit for her than the White House. Every day, the newsroom was buzzing with breaking news. Dukehart’s shifts were filled with multiple deadlines.

Dukehart worked the 4 p.m. to midnight shift, and her position allowed her to edit a variety of photographs covering a range of topics, not just meticulously scrutinized political photos.

“I was doing the ‘Photo of the Day’ gallery, which focused on 10 to 20 pictures from around the world,” Dukehart says. “It was a mix of photojournalism, features, kids and animals. It was a mix of very hard news and fun stuff.”

The job at WashingtonPost.com led her to other positions, first as an assistant photo editor at USAToday.com where she worked for three years, and then as the Picture and Multimedia Editor at NPR.

These positions reaffirmed Dukehart’s love for a fast-moving work environment.

“At NPR, I was constantly hiring photographers to go out on location and capture a story based on what was airing on the radio,” Dukehart says. “It was a lot of story juggling and prioritizing of my work.”

After seven years at NPR, when Dukehart’s supervisor, Keith Jenkins, moved to National Geographic, he asked her to join him there. It was an offer she couldn’t refuse.

“Keith is the best boss I’ve ever had,” Dukehart says. “I really learned a lot from him, and I enjoyed working with him enough to follow him anywhere.”

Dukehart has served as a senior photo editor for National Geographic Digital since 2013. Her main focus is on editing an online photo journal and blog called Proof that tells the stories behind National Geographic photo assignments and select freelance essays.

Dukehart plans, curates, photo edits, writes and edits multimedia and video. She also works with magazine editors to see how to cross-promote Proof within the publication as well as promoting the site on social media. Dukehart says she thrives on the variety.

“I never wanted a job where I felt like I was going to be bored or doing something repetitive,” Dukehart says. “Being exposed to a lot of different work and being able to meet photographers working all over the world is really exciting to me.”

Dukehart also says she finds the purpose behind the photos she edits inspiring.

“One of the things I like about working at National Geographic is that they have a mission to change the world,” Dukehart says. “They are not just publishing pictures. They want to actually inspire people to change their actions.”

In all of Dukehart’s positions, she has worked very closely with photographers in helping them bring their stories to life.

“Photo editors are storytellers and also facilitators of a story,” Dukehart says. “You have to be able to communicate with a huge variety of people in the newsroom and be decisive. It is your job to be the communicator between the publication and the photographer.”

Dukehart credits her many mentors with helping to shape her understanding of photojournalism.

“I would not be where I am now if it was not for the people I met at Missouri,” Dukehart says.

Stephanie Tebe is from Kansas City, Missouri, and will graduate in December 2015 with an emphasis in strategic communication. She served as the events assistant for the College of Veterinary Medicine for two years. She held internships at Groundswell Public Strategies, Cumulus Media and Mid-America Mortgage. Tebe plans to pursue a career in public relations.