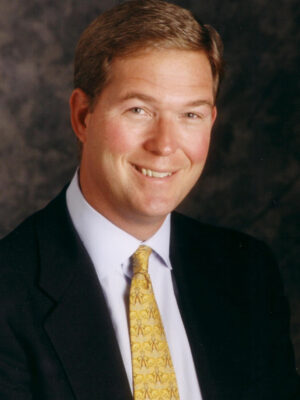 Dave L. Smith had a conversation with his dad about his future one day. His father looked at him and asked, “What kind of job do you get with an English degree?”

Smith’s father, the first person in the family to attend college, had some ideas about what a degree should do for a person. Being prepared for a job upon graduation was at the top of the list.

Smith, who was a sophomore at the University of Missouri at the time, took the talk to heart and decided to change his major to journalism.

Smith enjoyed watching evening newscasts as he grew up, so the notion of journalism wasn’t too far fetched.

“The combination of words and pictures were really powerful communication, and I wanted to be on that side of the news,” Smith says.

The more he looked into the journalism curriculum, the more convinced he became that it was the right move for him. The school’s two broadcast outlets, KOMU-TV and KBIA-FM, served mid-Missouri so he would gain experience at covering real news.

All journalism students at the time took basic newspaper writing classes. Broadcast coursework was in addition to this core. Smith worked as a reporter and morning anchor for KOMU and a weekend sports reporter for KBIA.

When Smith graduated in 1973, the shaky economy made it difficult for him to secure a job right after graduation. He drove around for three months in his Volkswagen to cities within one day of Kansas City, including Joplin, Springfield, Topeka, Kan., and Wichita, Kan., to hand out his tapes and interviews with TV stations.

Smith’s persistence finally paid off, and he landed his first job: anchoring and reporting at the only TV station in St. Joseph—KQTV, an ABC affiliate.

Smith was one of eight people who reported for the weekday noon, 6 p.m. and 10 p.m. newscasts. Each of the reporters took turns doing the weekend news.

During the 18 months Smith stayed with the station, he learned how to produce great journalism with equipment that was almost always broken.

“It was rough,” Smith says.

Shooting film and processing it was a labor-intensive process. Reporters had to roll 100 feet of film, or two minutes of time, into the handheld cameras. Film editing was done manually. Smith had to plan out the story before shooting, since he could not go back and make changes.

Smith and the other reporters each made $134.10 a week, a sum Smith describes as barely enough to survive on.

“We were paid in cash,” he says. “Every Friday we got an envelope with our name on it with five $20 bills, three $10 bills, four $1 bills and a dime. I put the money in my billfold and hoped I made it to next Friday.”

“We were paid in cash,” he says. “Every Friday we got an envelope with our name on it with five $20 bills, three $10 bills, four $1 bills and a dime. I put the money in my billfold and hoped I made it to next Friday.”

Despite the low pay, Smith gained valuable insights at his first job.

“Being forced to conceptualize stories more clearly and efficiently with limited technology made me a better writer and producer,” Smith says.

Back to the School of Journalism

Smith started to reflect on his situation.

“The station in St Joseph was too small, and there wasn’t anyone there that I could learn from,” Smith says. “Also, I made $134.10 a week and couldn’t live on the amount.”

He felt then was as good a time as any to earn the advanced degree he had wanted; especially since he now knew he wanted to go into management someday. Smith returned to the Missouri School of Journalism that year to pursue a master’s degree. He worked as a teaching assistant for KOMU, helping first-time students with their field reporting. Smith also worked as an anchor and reporter at the station.

In 1977, Smith graduated with a master’s degree in journalism with an emphasis in marketing. He found a reporter/anchor position for what was then WKY, now KFOR Channel 4, in Oklahoma City. Dick Nelson, MA ’71, worked at the station and helped him get the job. The two worked side by side professionally at the station for several years. Then both returned to the school, Nelson to work as a news director and anchor at KOMU, and Smith to teach broadcast reporting classes and run the station’s assignment desk.

“I wanted to give back for all I was given by the Missouri School of Journalism,” Smith says.

Smith enjoyed his work, but he still had the desire to be in management. Two and a half years later, he got his wish. The Cedar Rapids, Iowa-based market research and consulting firm Frank N. Magid Associates recruited Smith in 1982.

Those who knew Smith were surprised to see him make the move from anchoring and reporting to marketing. To them, the two fields were completely different. But it was a natural progression in Smith’s mind. His graduate program included many management courses, and most of his electives were business-related. Smith also found marketing research and consulting similar to teaching.

“You gather new information through the research about your audience,” Smith says. “You need to teach the staff about the audience and how they are receiving the news you are preparing and distributing.”

For the first several years, Smith worked with ABC- and NBC-operated stations in major television markets, providing marketing research and consulting for their news programs.

In 1993, Smith moved to Los Angeles to expand Magid’s research and consulting services to the entertainment industry. One of the first West Coast shows the company worked for had a Missouri journalism connection: Linda Bell Blue, BJ ’78, was executive producer for Entertainment Tonight.

The Next Big Step

SmithGeiger has long-term consulting agreements with ABC-owned stations and provides services to more than two-dozen cable stations such as CNN, The Weather Channel, The Discovery Channel and ESPN.

Smith says his experiences at the Missouri School of Journalism have helped him a great deal throughout his career as a reporter, anchor, writer and consultant.

Smith said the ‘Missouri Mafia’ network also has been very helpful for him. Nelson helped Smith get his job at the TV station in Oklahoma City, and being on the faculty at the Missouri School of Journalism helped generate Frank N. Magid & Associates’ interest in him.

“I encourage people who are in the J-School to keep their minds open of where their careers can lead them,” he says. “It can be in line with training from the school but could also be very different. Follow your desires and let them take you wherever they go.”

Smith keeps in regular contact with about seven or eight of his undergraduate classmates, one of whom is Kent Collins. Collins is an associate professor and chair of the radio-television journalism faculty at the school and was a Lambda Chi Alpha fraternity member.

Smith offers this piece of advice to Missouri School of Journalism students: “I encourage people who are in the J-School to keep their minds open of where their careers can lead them,” he says. “It can be in line with training from the school but could also be very different. Follow your desires and let them take you wherever they go.”

Aundrea Rogers, from Chicago, is a senior strategic communication major with a business minor. She is the marketing development coordinator for Zou Crew, a student spirit organization for the University of Missouri basketball team and on the public relations and advertising committee for Zou Nation, a sports organization on campus. Rogers also works in library at the MU School of Law and has served an internship with the American Bar Association.