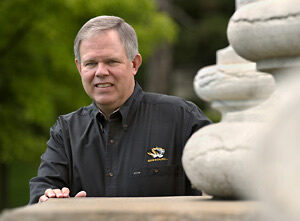 What do you do in your role as Executive Director of the Missouri Press Association?
The Missouri Press Association is a trade association of Missouri newspapers. We have about 300 member newspapers. I’ve been executive director since 1990, and I worked here 11 years prior to that as assistant director. I’m in charge of what happens here at the office. I spend much of the first five months of the year lobbying for Sunshine Law, Freedom of Information and related issues in Jefferson City, the state’s capital. MPA also sells and places advertising for newspapers. We have an annual convention, and we run a better newspaper contest for newspapers.

What factors entered into your decision to work for a newspaper association rather than be in the newsroom yourself?
I always wanted to work for small newspapers. In high school I worked for my hometown weekly newspaper after being encouraged by my high school journalism teacher. After graduating from Journalism School, I worked on a total of four weekly newspapers around Missouri, and published one that my wife and I bought in northwest Missouri. I joined MPA in 1979, and my boss was also on the faculty at the University. He really was my mentor. I feel that I am still working for newspapers but in this way.

What are the advantages of staying with the same organization for most of your career?
I have been here for 35 years. I know most of the publishers in the state and many of their editors and advertising people. I’ve been able to develop and maintain relationships that MPA has with other press associations throughout the country and their press association managers. Many of the managers in other states face the same challenges we do here, and we can help each other through this network. I am very lucky to have worked in one place for so long.

What trends or changes have you observed about newspaper journalism during your career?
The biggest change has been with the computer age and technology. I worked for a newspaper back in 1976 that still had hot metal equipment in the print shop. On Thursdays and Fridays I ran the job press in the shop and got a taste of what hot metal printing was all about. MPA bought its first computer around 1984. Apple computers, in my opinion, saved community newspapers. They made desktop publishing easily affordable for newspapers, and I think that’s why so many weekly newspapers still thrive today. I remember when the Columbia Missourian purchased its first computer around 1971. It was brought in, and no one was quite sure what to do with it. Only a select few could touch the computer. The rest of us had Royal typewriters we worked on.

What is one of your favorite memories from your days at the School?
It would have to be Friday nights when I worked on the copy desk for a professor named Luther “Sonny” Sanders. He was a copy editor who worked in the “slot,” and he taught copy editing. We were given stories to copy edit and write their headlines. One semester, I pulled a Friday night shift, meaning I worked from 5 in the afternoon and stayed until the first papers came off the press, about 12:30 in the morning. That was a great semester. I enjoyed doing that and the Saturday morning shifts. It was more relaxed, and you got to work on stories for the Sunday paper.

What advice do you have for current students?
Current students should familiarize themselves with all of the new media that are emerging. Times have changed. It was so much simpler when I graduated 41 years ago. You could go to work for a newspaper; you might go to work for an advertising agency; you might be a photographer for a newspaper; or you might go to work for a magazine. Today there is so much change in the business. Chains, not local people, own more of today’s newspapers. For example, Knight Ridder sold many of its papers to McClatchy Newspapers. The St. Louis Post-Dispatch was sold to Lee Enterprises and is no longer a Pulitzer company. Those are big changes.

Since you are still in Columbia, are there places that you still frequent that you also went to as a student?
The Heidelberg, of course. We went there a lot in college, and I still do today. Shakespeare’s Pizza opened when I was a junior. Harpo’s opened up when I was here. Those are three places I still occasionally visit. And Booche’s…I can’t omit Booche’s.

You’ve been very involved with the MU Alumni Association, serving as president. What was your favorite part of that position?
My favorite part was to meet alumni from all over the country and see how passionate they are about Mizzou. We have alumni in every state and all over the world who are so caring about this university. Some side benefits include speaking at the honors convocation for graduates and presiding at Tiger Walk. Tiger Walk was extra special since my daughter was a freshman in 2004, and I was there when she walked through the Columns. I must mention Tiger Stripe ice cream in this list as it’s served at many alumni events.