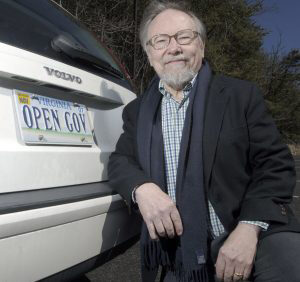 A Lifelong Fight for Open Government

For more than 50 years, Landon has worked alongside – and faced off with – lawmakers at all levels regarding policies governing documents, open meetings and the public’s right to know.

The 73-year-old former journalist is now preparing to retire as executive director of the Virginia Coalition for Open Government – a nonprofit organization he helped establish in 1996.

The coalition’s only full-time employee, Landon advises journalists and citizens about the nuances of open meeting and open records law, while working with lawmakers to make improvements.

“It’s fair to say that, if not for Frosty’s vision and hard work, the General Assembly would not have rewritten the state FOI (Freedom of Information) Act and citizens would not have a state agency that serves as a clearinghouse for access to open records,” said David Poole, executive director of the Virginia Public Access Project.

The VPAP is another nonprofit group that monitors campaign spending in the state. Landon also serves on its board of directors.

“VCOG is an example of how one person’s dedication and singular focus can make a difference,” Poole said.

“For a decade, anyone who has cared about open government could sleep better at night knowing Frosty was on the case. His legacy will benefit generations to come,” Poole said.

Landon helped establish the nonprofit coalition after retiring from journalism. The coalition is a collaborative effort by the state press and broadcasters associations, newspapers, media groups and librarians. It was patterned after similar organizations in Florida, Texas and California and now serves as a national model.

“I’ve always been involved – as any journalist is – in keeping government accountable,” Landon said. “With the coalition, it’s more advocacy and educational efforts. And the little bit of lobbying, that the law will allow, to make sure a bad bill doesn’t slip into law and affect the rights of the 6 million people who live in Virginia.”

After the coalition was established in 1996, its founding members soon realized the state needed some form of ombudsman program, Landon said.

“We formed a study committee that looked at defusing and demystifying the FOIA battles,” he said.

It received state funding and was established in 2000.

The Freedom of Information Advisory Council owes its very existence to Landon, according to Executive Director Maria Everett.

“He was instrumental, during the study, of getting the FOIA Council founded,” Everett said. “He was the one who persuaded everybody it was necessary.”

Landon understood citizens who were having problems with local and state officials needed somewhere to turn, she said.

“There is a real need. We field 1,800 inquiries per year and each year it goes up,” Everett said. “The first six months we were in operation, we got 800 inquiries.”

Landon also has worked on open government issues nationally, serving two terms as president of the National Freedom of Information Coalition. He remains active in that organization.

He also remains involved with the Virginia Public Access Project, which was established in 1996. It provides a free online database of state candidates, contributions, political action committees and other information.

“Occasionally, you run across somebody in government who forgets they work for the taxpayers,” Landon said. “Citizens own the government, but they (officials) think they know best. They want people to just go away and leave them alone. It’s all about attitude.”

One of Landon’s most memorable experiences about the importance of public documents came during a Roanoke Times investigation into a former chairman of the North Carolina Republican Party.

“He was leading a second life in Roanoke, with a second wife. It was records that confirmed that information and helped us get past the denials,” Landon said. “He stepped down, but that was a very complex story with the potential to get something wrong.”

The upstate New York native moved to Roanoke just after graduating from the University of Missouri School of Journalism. He still calls the city home.

“I went to work in television and radio at WDBJ for 10 years, and then at the Roanoke Times newspaper,” he said.

Landon held a number of newspaper management positions, finally serving as its executive editor before retiring at age 62.

He now plans to retire again in June.

“I flunked retirement once before, but not again. There doesn’t need to be a third act for me,” Landon said.