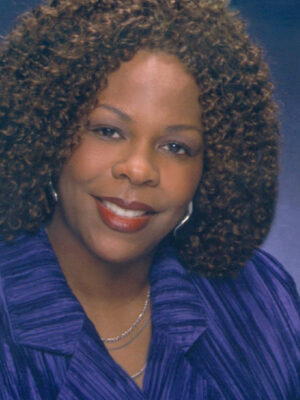 Life on the Leading Edge: The Story of Dean Gail F. Baker, PhD ’91

Gail F. Baker, PhD ’91, APR, Fellow PRSA (Public Relations Society of America), calls it the highlight of her career thus far. She began the 2006-07 academic year as the newly appointed dean of the one-year-old College of Communication, Fine Arts and Media at the University of Nebraska at Omaha – a merging of the university’s School of Communication with its College of Fine Arts.

“It’s a collaboration. With the television and radio stations, we have the ability to take art and transmit it,” she explains. “Students in the PR program now have an opportunity to develop their skills and their training not just in the corporate settings.

“The faculty and students think it’s an exciting new way to look at expression. We have theater, art, communication, radio and television stations – all of these under one umbrella,” she says. “Everybody’s excited. I haven’t run into anybody yet who doesn’t think this has great potential.”

This new position also marks Baker’s return to the Midwest, where she grew up.

From Storytelling to Journalism

Given Baker’s recent career milestone, it might be surprising to learn that she never intended to pursue a career in either public relations or academia. However, she was drawn to the art of storytelling – a key skill for communicators and academics alike.

“I have always been interested in telling stories, in the way people understand things, human communication,” says Baker. Much of this interest was spurred, she says, by the confusion she felt when she was in Chicago during the 1968 riots.

“A New and Exciting Thing to Do”

“I was impressed with the way they focused on their clients and their issues,” she says. “I understood what kind of influence they were having on my profession as a journalist and saw where I could have a different kind of impact.”

“I realized that public relations was on the leading edge,” she continues. “I thought, ‘This seems like a new and exciting thing to do.'”

She solidified her public relations involvement by joining PRSA about 20 years ago. An active member, Baker has since earned her Accreditation in Public Relations, been inducted into the College of Fellows and, for the past 10 years, has served on the Honors and Awards Committee.

Baker appreciates the contact with other professionals and the chance to review high-quality public relations work as a member and 2006 Individual Awards Chair of the Honors and Awards Committee. “It keeps me fresh,” she says.

So, how did Baker make her way into academia? It happened unexpectedly during a simple phone call.

While working as a public relations professional for IBM in 1982, Baker called Professor Roger Gafke at the Missouri School of Journalism with a computer question. Though she still is not sure what she said or did to prompt him, Gafke asked if she had ever thought about teaching. “The next thing I knew, he had convinced me,” she says.

“I was young – I really was – young enough that if I blew it, I could recover,” she says with a laugh. “But I got in the classroom, and I was hooked.”

From 1983 to 1995, Baker taught at the Missouri School of Journalism, where she eventually served as chair of the advertising department as well as director of the School’s Knight Foundation Office of Minority Recruiting and Retention. In 1995, she joined the University of Florida, where she took on various roles during her 11 years there, including vice president for public relations, director of communications and chair of the public relations department in the College of Journalism and Communications.

Her work as an educator has been honored with the William T. Kemper Award for Excellence in Teaching at the University of Missouri and a Top Three Faculty Paper citation from PRSA for her research on the impact of race on crisis communication management, among other awards.

Kathleen Kelly, APR, Fellow PRSA, professor and chair of the department of public relations at the University of Florida, notes how unique an achievement Baker’s appointment to dean is because so few public relations educators achieve that level of influence in the academic community.

Kelly worked with Baker at the college and within PRSA for more than 15 years and speaks highly of her colleague. “She is a strong woman. She has a great deal of courage,” says Kelly of Baker. “She is not afraid, nor does she hesitate to take on new challenges. It’s something I admire greatly in her.”

Baker is also a proponent of mentoring, and can easily recall three mentors who impacted her career.

She cites the late Audrey Weaver, who was managing editor at the Chicago Daily Defender when Baker was a reporter and editor there.

“She was tough as nails,” says Baker of Weaver. “Her dedication, fearlessness – she was groundbreaking. She was a woman, and she was running a predominantly male newsroom. She was always professional, and they respected her…you did not want to let Audrey Weaver down.”

Baker also found inspiration in two past presidents of the University of Florida – Dr. John Lombardi (who served from 1990 to 1999) and Dr. Charles E. Young (1999 to 2003), who she calls “two of the premier leaders in higher education.”

“From them I learned to put the students first and always understand why you’re here,” she explains. As a result of Lombardi and Young’s influence, Baker strives to be consistently accessible to students.

Furthermore, these three individuals motivate Baker to give back to younger communicators as a mentor. “When people reach out to you, you have a responsibility to do the same,” she says. “They were all busy. They had a lot of people to deal with, but they always made time for me.”

Baker also makes time for writing about issues that are important to her, mainly minority representation and underrepresented audiences. She has authored two books – “Advertising and Marketing to the New Majority” and “Exploding Stereotypes: Milestones in Black Newspaper Research.”

“As the demographics have changed and continue to change, the need for every institution and entity to communicate with its myriad of constituents is greater than it has ever been,” she says. “We have not caught up with the numbers. We don’t have the numbers in our professionals.”

Baker urges discussion within the profession. As she says, “Keep talking about it. Keep writing about it, wherever we are, whether in a classroom or a boardroom.”

Baker also describes herself as a major supporter in the fight against breast cancer and participates in as many benefit walks as she can. Though she has not personally known anyone who has suffered with the disease, she is involved in the cause as a tribute to her daughters, ages 13 and 7.

In whatever spare time she has left, Baker enjoys watching professional sports and baking for her family, which, in addition to her daughters, includes her Chicago-native husband and two sons age 28 and 27. “I’m the cookie-baking queen. My children are spoiled,” she says with a laugh.