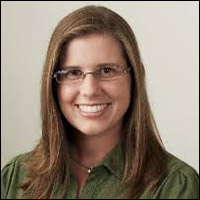 She looked around the room, and a feeling of awe came over her. Many fans around the country would give their most prized baseball cards to be in her position. At age 23, Jenifer Langosch, BJ ’07, was entering a room occupied by every living baseball hall of famer, all waiting to be interviewed by her and the other reporters in New York City for the 2008 All-Star Game.

Covering MLB.com for the St. Louis Cardinals has presented Langosch with many opportunities that she could only dream of as a young girl.

Her experience at the Missouri School of Journalism, dedication to the integrity of her craft and willingness to put in the long hours required of sports reporters spurred her into an exciting career writing for MLB.com directly out of college.

Going Beyond the Huddle

Langosch grew up in Marietta, Georgia, the daughter of avid Atlanta Braves fans. She was introduced to the sports environment early on.

“It started out by watching games, and then I became immersed in reading the sports page and digesting statistics,” Langosch says. “It became a bonding activity with my dad and one of the reasons I set myself on sports writing at an early age.”

Greg Bowers, a sports editor at the Columbia Missourian, was particularly influential in Langosch’s development as a sports writer.

“He was really the one who taught me how to seek human-interest angles or a different perspective on what otherwise might have been an ordinary game,” she said. “His message was always to zig when everyone else zagged.”

Langosch has carried this lesson with her into her career. In the fall of 2011, the Cardinals were in the Worlds Series. It was an off day; meaning Langosch had no game to report on. Rather than “zagging” to a typical off-game story, she “zigged” to Joplin, Mo., a town in the process of recovering from an EF5 tornado that devastated the area five months prior.

It was a risk, and it paid off immensely. Langosch uncovered a story that reached beyond the typical thrill of the World Series. She learned about the comfort that baseball had been giving to Joplin residents throughout the season and was inspired to write a story sharing the resiliency of the victims who were working so hard to restore normalcy to their decimated homes. The community response can best be summed up in a quote that brings her MLB.com article to a close:

“That connection with the Cardinals returned me to a safe place,” said Joplin resident and relief volunteer, Andy Wilson. “The Cardinals were OK. They were playing ball, and we were going to be OK. I know that sounds cliché and cheesy, but sometimes you have to grab a hold of something.”
Cards Continue to Be Outlet for Rebuilding Joplin

As she interviewed them, Joplin residents also shared the impact that the Cardinals players were having directly on their community. The team raised $200,000 in relief funds, and some athletes took the time during the season to visit Joplin to announce the “Teams Unite for Joplin” initiative.

It’s details like these that draw Langosch to a story.

“I try to make athletes human,” she said. “I value trying to make sure that people remember that the athletes are people as well.”

It’s no secret that the sports industry is one that women are still working to break into. Often Langosch is the only woman in the pressroom. This could lead to some uncomfortable situations, but in keeping with her personal convictions, she has evaded controversy and set a strong example for aspiring female sports reporters.

In the clubhouse, Langosch is sensitive to professional dress, when it is and is not appropriate to approach the players, and demonstrating knowledge in her field of expertise.

“I think the best way to denounce stereotypes is to simply do your job right,” she said. “Once you show people you entered the profession with pure intentions and that you can cover a team capably, the stereotypes crumble.”

Actions may speak louder than words, but Langosch also realizes the impact she can make by talking to young women who are looking to follow in her footsteps. She gladly responds to female students who turn to her for advice and returned to her alma mater to speak to the members of the Association for Women in Sports Media in April 2014.

“My intent is to show them that a female can be successful in this business,” she said. “It’s a privilege for me to be able to tell women that they don’t have to alter their dreams just because there are not a lot of females doing what I do.”

Langosch feels that a key part of proving she deserves the position that she has is upholding the coveted journalistic value of credibility.

Though fans want to hear optimistic stories about team successes, all teams cannot always have a good season. To maintain her credibility as a reporter, Langosch makes sure she reports as she observes. There’s no room for sugarcoating, inserting her own opinions or telling her audience what it wants to hear.

“Credibility is a big deal to me,” she said. “Because I write for the team, a common misconception is that I’m a PR [public relations] arm for the Cardinals and that I’m employed by the Cardinals, which isn’t true. We’re two completely separate entities. One of the things I strive to do is report on the team in an objective manner so that readers can see that distinction. If it [the season] is going good, that’s great. If not, that’s what I have to write.”

It’s Not all Fun at the Games

For many Americans, an evening at the ballpark is a relaxing escape from reality. For sports reporters, it’s a little different. It’s unpredictable, exciting and fun, but it’s also a lot of work.

By first pitch, Langosch has published three to six short stories or game notes. A draft of the game story is due by the end of the 8th inning, and it must be completed – with quotes – 90 minutes after the game. There’s little time to take a breath after that, as she is already looking ahead and writing a preview story for the next game.

In addition to her traditional pieces, Langosch tweets and sends out breaking news stories as the game is being played. Since her graduation from the School, social media has become a prominent player in nearly every industry. New outlets have sprung up, requiring her to embrace a new level of fandom and report with multiple media in mind.

“When I started my job with MLB.com, I was responsible solely for writing stories,” she said. “They would show up on the website and that would be that. Now I am also responsible for reaching out to readers through social media platforms. I’m active on Twitter (@LangoschMLB), I have a Facebook account for my work, I run a Flipboard page (to post videos) and I regularly record interviews with a Flip Cam. So many people get their news from social media in today’s world that we have to be tapped into it.”

Because of this evolution, Langosch says the next generation of journalism students should focus on being proficient in as many forms of media as possible. While her focus going through college was news-editorial, she now does online work, TV stand ups and radio interviews.

“The days of having a narrow focus in the business are over,” she said.

So what is next for this young professional who achieved her childhood goal straight out of college? Langosch says she has considered giving back to her profession by teaching high school or college journalism. For now, she will continue to report objectively and enjoy living out her dream job.

“I get to go to work every day, and I don’t know what I’m going to see. I could go to work one day and witness history, and, to me, that’s awesome,” she said.

*Job update:  Jenifer Langosch is still with MLB, but at the end of 2019 she left her position as a beat writer and transitioned into a new role as part of MLB.com’s editorial management team.