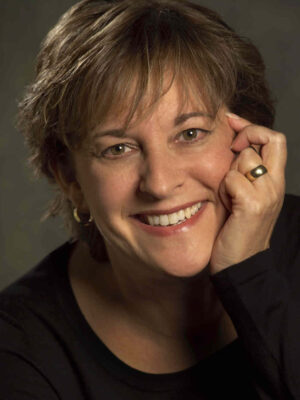 The writing career of Jody Feldman, BJ ’78, was almost sidelined in seventh grade. When her teacher assigned her class to write about their summer vacations, Feldman made it a personal challenge to create an exciting story out of cultivating a backyard pumpkin plant.

The teacher praised the essay and its creativity, but the high-achieving, ever-competitive Feldman could only focus on her teacher’s critique:

Dear Jody, you are an excellent writer, but your ending disappointed me.

“It was a punch to the gut,” Feldman says. “I totally lost confidence in my writing.”

This confidence didn’t return until she was a student at the Missouri School of Journalism. In her coursework in the advertising sequence, she reignited the same creative energy she used in her junior high essay. After graduation, Feldman spent her entire career working with words – first as an advertising copywriter, and, after years of perseverance, as a published author of four children’s action novels.

Feldman arrived at the University of Missouri with dreams of being a psychologist but soon found she had little interest in the coursework. After making a mental list of all of her career options – and quickly eliminating anything related to teaching and science – the second-semester freshman eventually whittled her list to journalism.

Feldman couldn’t see herself as a reporter, but she was familiar with advertising after having grown up with a father in the field. A freelance advertising artist who worked frequently with Anheuser-Busch, he often shared his creations with his daughter.

“He was the expert at drawing the sweat beads on beer bottles and glasses,” Feldman says. “He could draw Clydesdales like nobody’s business.”

Unlike her father, Feldman was drawn to copywriting rather than design. But before she could start her advertising classes, she had to take a required course in news reporting. While news reporting took the self-described introvert out of her comfort zone, Feldman mastered the art of writing under deadline and had several articles published in The Columbia Missourian.

The courses in the advertising sequence, however, appealed much more to Feldman’s personality and writing style. She loved the creative challenge of writing advertising copy so much that she spent four semesters helping students refine their own skills as a teaching assistant for the advertising principles and practice course.

Feldman’s writing skills were especially showcased in her capstone project, a semester-long culmination of the advertising sequence curriculum. Feldman and her project partner created a promotion strategy for Milnot, a brand of non-dairy evaporated milk. The project featured a series of print advertisements and required rigorous market research, which included a trip to the company’s plant in Illinois.

Feldman spent many evenings on the floor of her apartment with whiteout and a hole punch, producing copy on a typewriter and hand-illustrating Milnot advertisements. When the duo presented their finished campaign, the client was especially impressed by their series of holiday ads showcasing recipes using Milnot products. A favorite was an American flag cheesecake for Fourth of July.

The long hours spent on the capstone campaign caused Feldman to miss some evenings out with her Alpha Epsilon Phi sorority sisters and friends, but this didn’t hamper the lifelong friendships they forged during their time at MU. Feldman, several sorority sisters and friends from Jones Hall have remained in close contact over the years, visiting one another across the country and taking “girls’ vacations.”

Feldman managed to find another lifelong friend while at MU: her husband, Dick.

She met the fellow journalism major at his fraternity house, Alpha Epsilon Pi, on a Thursday night during their freshman year. Two days later, they were an item – for life.

Dick and Jody married a year after they both graduated from the School of Journalism.

After graduation, the couple moved back to Jody’s hometown of St. Louis, where he started law school and she began looking for jobs at advertising agencies.

Feldman eventually scored a second interview for a copywriter position with Wohl Shoe Company, a division of Brown Shoes (now Caleres). Toward the end of the interview, she spied a note on the interviewer’s desk that suggested hiring a different candidate. Feldman knew she had to act fast if she wanted the job.

Just before she walked out of the interviewer’s office, she turned around and made her case: She assured them that not only did she really want the job, but also they could count on her to be a hard and dedicated worker.

An hour later, Feldman received the call that she had been hired.

“I since learned that the little pitch tipped the scales in my favor,” she says.

For the next six years, Feldman honed her skills writing advertisements, newsletters and fashion articles for Wohl brands, such as Connie and Fanfares.

“I got comfortable in my writing and realized I could write really fast and really well,” she says.

In fact, after just a few years at Wohl, Feldman had become such a quick writer that she often finished a day’s work by mid-afternoon. In her down time at the office, she created rhyming children’s stories and crossword puzzles.

These exercises would prove to be valuable in the next stage of her writing career, which began when she decided to leave her job at Wohl Shoe Company to become a stay-at-home mother.

Feldman balanced motherhood with a variety of freelance copywriting jobs. Branching out from the shoe industry, she wrote for clients ranging from video stores to rodeos.

Inspired by the children’s books she read to her two young daughters, Feldman began creating her own storybooks. These early stories never made it to publication, but she remembers the times spent writing them as some of the happiest of her writing career.

Feldman’s advertising background was key to her eventual success as an author. Not only did it nurture her imagination and creativity, but it also gave her years of experience writing for a target audience.

She found her new target audience when she was volunteering in the library at her daughter’s elementary school. A fifth-grade boy who just read “Charlie and the Chocolate Factory” couldn’t find another book that matched Willy Wonka’s sense of playful adventure. So Feldman took this as her cue: She could write a book the boy would want to read.

“That was the whole inspiration,” she says. “This kid needs a book, and maybe I’m supposed to write it for him.”

Recalling her own childhood love of brainteasers, Feldman was sure a puzzle-packed story would excite her middle school readers.

Thus was created “The Gollywhopper Games,” the story of a 12-year-old boy’s adventure to win a toy company’s puzzle-solving competition. Readers can stop and solve the puzzles themselves, or they can continue reading to find out how the characters solve them.

Feldman struggled to find an agent who was willing to take a chance on her unconventional approach to storytelling. Even after connecting with an agent at the annual Society of Children’s Book Writers and Illustrators in Los Angeles, it took three more years – and as many rewrites – before Feldman got the call she had been waiting for.

Feldman was on her way to get a haircut on a rainy spring day when her agent called to tell her that “The Gollywhopper Games” would be published. She dialed her husband, daughters and parents as soon as she pulled into the salon’s parking lot, but all she could reach were voicemails. She wanted her family to be the first to hear the exciting news, so she resigned not to divulge anything to her hairdresser.

“He cut hair like nobody’s business, but he was not going to be the first person I was going to tell,” she says, laughing.

A dream two decades in the making, Feldman officially became a published author when “The Gollywhopper Games” hit bookstore shelves in 2008.

“I understand now how validating it is when someone offers you a job that not many people get to do,” she says.

“The Gollywhopper Games” earned an array of honors, including the Grand Canyon Readers Award, Georgia Children’s Book Award and a Texas Bluebonnet nomination.

The initial success of “The Gollywhopper Games” led Feldman to expand the story into a three-book series. In 2011, she also published another puzzle-packed, middle-grade adventure novel called “The Seventh Level.”

Even as an award-winning author, Feldman finds writing difficult and often draining.

“You get these bright, shiny ideas in your head, but when you write them down, they’re never quite as good as your brain makes them out to be,” she says.

But, Feldman takes any plot problems and character issues in stride.

“I refuse to believe in writer’s block,” she says. “You can always write a sentence – it might not be the right sentence, but it’s something that can advance your story.”

Like her “Gollywhopper Games” hero Gil Goodson, Feldman’s own story proves that perseverance and problem solving can be the ticket to overcoming odds and achieving dreams.

“There are many people who end up succeeding in things they never thought they’d attempt,” Feldman says. “By forging ahead, though, you may suddenly find that you’ve gotten somewhere.”

About the Author: Connor Voss is a senior at MU pursuing a bachelor’s of journalism with an emphasis in strategic communication and minors in business and economics. Voss grew up as an avid reader and writer in Washington, Missouri, a small town that nurtured her sense of community and creativity. Since she began at MU, she has deepened these interests through her campus involvement, volunteer work and internship experiences at the Washington Missourian, JES Holdings and FleishmanHillard. After completing her master’s degree in strategic communication at the Missouri School of Journalism, which she hopes to do, Voss will pursue a career in public relations, which combines her passions for storytelling and community.