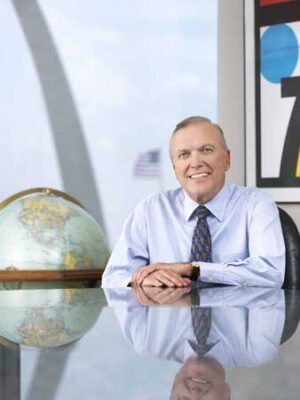 What is a typical day for you?
My day to day varies a great deal. I travel a lot. If I were to go to New York, I would be meeting with one of our key clients, perhaps talking about some of the work we’re doing for them and some of the opportunities and challenges that they have and how we would apply our communications capabilities to their issues.

What’s the best part of your job?
I love to get the opportunity to visit with our people about the work that they’re doing for our clients. This is also a time when I can give the staff a report on what I see coming in the industry and for their company, FleishmanHillard.

You started working for FleishmanHillard when it was a small public relations firm in St. Louis and its founders were active in the work. What was that like?
It was a great opportunity for me because I had the opportunity to be mentored by both of the founders of the firm. Bob Hillard was a fantastic writer and had the ability to express his thoughts in writing. I learned so much about writing from Bob. Al Fleishman was one of the most articulate individuals I have ever seen. When he was able to sit down with a client and talk to them, Al provided great counseling and was able to do so because of his ability to articulate a lot of his ideas. Working with these gentlemen provided me a good basis for my career. I owe both of them a great deal.

Did you know you wanted to do public relations when you were in college?
When I first enrolled I really wasn’t sure what I was going to do. About midway through my freshman year, I decided I would really be interested in the School of Journalism. The School had such a great reputation, and I had always been interested in communications. So it was a natural thing for me to do, and the advertising sequence seemed like the one for me.

What other activities were you involved in while you were in School?
I was on a track scholarship while I was here so I was heavily involved in running cross-country, indoor and outdoor track. I also was involved in a fraternity. With all of this and schoolwork, it was a very busy time for me.

What are some of your favorite memories of these activities?
I have some great memories of meeting some great people who I’ve stayed in touch with throughout the years. One of my greatest teachers was my track coach, Tom Botts. He taught me a lot of about integrity and commitment to hard work, which I think is a basic element that I’ve carried throughout my career. I participated actively in fraternity life.

What has been your biggest professional challenge?
The MGM Grand in Las Vegas had a fire, which killed 82 people, and FleishmanHillard was hired by MGM Grand to restore confidence in that hotel. In looking at the work we did as a classic crisis recovery communications program, I learned so much from it. It was one of the biggest challenges our agency has ever had to face.

Where do you see the public relations industry going in the future?
Our industry is changing so rapidly. The traditional public relations skills, the public relations thinking, in many instances no longer applies to the many issues, the many challenges, or the many opportunities which our clients have today. At the same time, I think it’s really changing for the better. We are doing things today in our business that we weren’t doing five or 10 years ago.

Do you think students are currently being prepared for the industry?
We have a number of University of Missouri people at our various offices. It’s encouraging to see a lot of the new communications vehicles and techniques being taught here now.

What advice do you have for students just starting out?
It’s absolutely essential that everyone in this curriculum have an ability, or at least certainly an interest, in writing. That’s not to say that anybody who cannot write cannot learn to write. You can absolutely learn to write. In my own career when I first joined FleishmanHillard in 1966, I would describe myself as an adequate writer. Over a period of time, I became a good writer. So you can learn to do it. If I can learn to do it, anyone can learn.

What was the most valuable thing you learned while at the School of Journalism?
When I took a course in public relations, I didn’t know if I wanted a career in advertising or public relations. That course was definitely influential in me choosing later on to go into public relations rather than advertising. One of the requirements of that course was to write an extensive program for an imaginary client and talk about a situation, a crisis situation for this client faced and write out an entire program for dealing with that crisis. I still have that paper. Occasionally I’ll look back on it, and actually, it was pretty good. I’m pretty amazed.

What would you say to current Missouri journalism students interested in public relations?
No. 1, I would congratulate them on choosing this career and certainly this School. This is really the golden age of communications. There are so many organizations and corporations that are facing communications issues that this is a great time to be in this business. No. 2, I would urge them to think broadly and certainly to think internationally. Of course, I also would urge them to make sure that they can write.