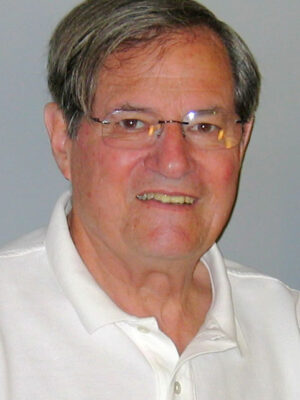 John Lesser, BJ ’50, has spent over 60 successful years in the advertising and promotions field, serving major corporate clients such as Sharp, Toshiba, Panasonic and Olympus Optical, just to name a few. Now focused on just one client with the consultative agency he founded in 1971, John Lesser and Associates, Lesser took time to reflect on his career and the role the School played in his life. The following is his account of a true Missouri Journalism success story.

Learning Lessons in the Military

After graduation, I returned to New York City and joined an Italian sewing machine company, Necchi, as ad manager. It was a hot product in the 1950s with print advertising in major women’s magazines and network TV. The advertising agency was Doyle, Dane, Bernbach – a hot agency of that era.

The Korean War intervened. My ROTC commission in the Air Force was activated, and I became the public information officer at Laughlin Air Force Base on the Mexican border in Texas. At the beginning of my stay, it was a jet fighter training base for both American and foreign pilots. Then, it became the training base for pilots of U-2 spy planes.

During my stay at Laughlin, I noticed that an editor of the weekly Army-Air Force Times was an MU graduate. The base was located in the heart of West Texas cowboy country, and my base commander had trained as a cavalry officer while at West Point. I arranged for the base commander to be the marshal for an important local charity parade, and subsequently, I used my MU connection to get a large photo of him – waving to the crowds while leading a charity parade – on the front page of Army-Air Force Times. He received congratulatory messages from his West Point classmates and comrades-in-arms throughout the world. Loved it! Lt. Lesser was forever a hero!

In 1971 (about 20 years after graduation), I had a major change in my life. I was invited by SCM Corporation to organize a house advertising and sales promotion agency which would be located in not-too-shabby company offices on the 39th floor of a skyscraper on New York’s Park Avenue. It came with a multi-year contract.

John Lesser and Associates was underway.

We added a second client, Sharp Electronics, through a recommendation by the president of Smith-Corona to the president of Sharp USA. The work for Sharp lasted more than 15 years and was of a promotional nature: literature, sales contests, sales meetings for personnel and customers. That relationship with Sharp led to referrals to a number of Japanese companies for which we handled sales promotion at first, followed by print advertising and trade-related product publicity and, finally, sales and marketing consultative advice.

The Japanese companies with which we enjoyed long relationships included (in addition to Sharp): Toshiba, Panasonic, Olympus Optical and Brother Typewriters. We worked with each of these companies for more than a dozen years; all very good relationships. We also had a large American company client, American Brands (formerly American Tobacco).

Our offices were in the Graybar Building, the mid-town New York City home for Coca-Cola, J. Walter Thompson Advertising (my company’s first landlord) and numerous foreign nations’ delegation offices. The United Nations was two blocks away.

After about 25-30 years, the business began to retrench. The needs of the clients changed and required different skills, largely more electronics-oriented. I no longer had the hunger and need to solicit new clients. The downsized business moved from mid-town Manhattan to suburban offices on Long Island near my home in Kings Point, N.Y.

Now there is one client left, a client with which we have worked for over 40 years. It is Nishiyama Corporation, a group of mid-sized, mid-level technology industrial Japanese companies. For Nishiyama, the work is of a purely consultant nature, involving sales and marketing, personnel management, rental of office space, and contacts with attorneys and accountants. Nishiyama serves its own product interests as well as a trading company for other Japanese companies and government departments.

It has been a career rewarded in many ways, among which are satisfaction from client respect for jobs well-done; close and permanent relationships with employees, clients, and vendors, and a decent income.

A number of years ago, I found myself with time on my hands after a conference in Kansas City, Mo. I used the time to rent a car and return to Columbia for nostalgia sake. Besides visiting the sites of former residences in my college days, I stood between the Jay Neff and Walter Williams Halls. I was gripped with emotion and stood there crying with remembrances of joy. I was surrounded by students who offered to supply any needed help. I explained my emotional feelings.

I had the same feelings about the importance of the J-School in my life when I returned for the 1950 class reunion in 2000.

Although in my 80’s, I manage to continue professional consultation and am particularly proud of my family life. I have been blessed with a happy marriage of over 50 years. My son lives in Charleston, South Carolina, with his wife. My daughter and her attorney husband live in Baltimore. Their eldest child, who has dual degrees in electrical engineering and computer science from Johns Hopkins, is employed in the aircraft industry in Annapolis, Maryland. The middle son is pursuing a degree in neurology at the University of Delaware. The youngest is entering college in fall 2015. My home faces east to greet the morning sun on Manhasset Bay, New York, on New York’s Gold Coast.