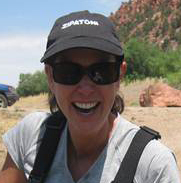 Karen Sauder, BJ ’90, returns home from a long day at the office and shifts her focus from work to her family. Although she travels quite a bit working for Google, when Sauder is home, she says she is giving her family her all by spending quality time with her children and her husband. An expert at time management, Sauder even finds time to fly fish, one of her favorite hobbies.

Sauder has learned firsthand what it takes to excel as both a career woman and a family woman. Balance, time management and teamwork have brought her to where she is today: working as the industry director for food, beverages and restaurants at Google.

“What I think is great for women today is that making choices is no longer seen as a negative, it is actually seen as a positive.” Sauder says. “At a company like Google, we care a lot about work-life balance.”

Sauder didn’t originally intend to come to the Missouri School of Journalism. Growing up in St. Louis, she had always thought she wanted to be a lawyer. But, after being attracted by the advertising sequence at the J-School, Sauder “fell in love with the people at the J-School and the campus, and never looked back.”

During her time at the Missouri School of Journalism, Sauder enjoyed all her writing classes with the late Henry Hager, professor at the J-School, and especially liked communication law. She also says that it was fascinating to attend a school with one of the first Mac labs in the country, which made the Missouri School of Journalism one of the most cutting-edge universities in the U.S.

Sauder remembers her professors at the J-School telling her to think like a reporter and communicate through writing. They told her communicating like a writer would make her a better thinker. She has abided by this throughout her entire career, and it has been key to her success.

Another piece of advice that she was given at the J-School was to never address someone as Mr. or Mrs. in the professional world. Sauder says it is important to be perceived as a peer and since she was a young female in a professional world, having that mindset helped her to achieve early success.

Sauder says that she only has fond memories of her time at the J-School and is grateful for the knowledge and experience that she gained there.

Following graduation, Sauder interviewed with anyone and everyone she knew in the advertising industry. After networking with potential employers, she landed a part-time position with Busch Creative Services. Sauder was initially disappointed at the prospect of a temporary job but took the advice of her father and “got out there and showed them what she could do.”

Eventually, Sauder worked her way up into an agency role at Busch Creative Services as an account coordinator. She first worked in the auto industry and worked with Volkswagen and Lincoln-Mercury. Sauder then switched gears and worked on the beer side of Anheuser-Busch. Her responsibilities included running markets throughout the south and the east and working with distributers and retailers.

In 1995, she accepted a position as a zones sale manager at Frito Lay. There, she led large teams of sales and marketing employees and worked her way up in the agency side of advertising.

In 1998, Sauder moved to Zipatoni, a marketing and promotions agency that specializes in online and viral marketing. She held various positions at Zipatoni during the nine years she worked for the organization including account director, vice president and ultimately president.

After leaving Zipatoni, Sauder was offered a position as a managing director at Draftfcb, a promotional agency and sister agency to Zipatoni. She spent four years at Draftfcb as managing director and executive vice president and worked with Draftfcb clients like SC Johnson, KFC, Mars, Kraft and Boeing. Under her leadership at Draftfcb, the agency added clients including Kmart, Miller Lite and Qwest.

In 2009, while working at Draftfcb, Sauder was named Chicago’s Ad Woman of the Year, an award that came as a surprise and that she credits to the team she was working with. She and her team’s work with clients – including Dow Chemical Company and Coors Light – contributed to the award.

“It was a lovely honor, and it was really a reflection of the team I was working with and all the things we were able to accomplish together.” Sauder says. “I wouldn’t have been advertising woman of the year if it hadn’t been for all the great things the team had done.”

In 2011, Sauder moved to Google because they identified a strategic need to focus on the food, beverage and restaurant industry and targeted her as a potential leader.

As industry director for food, beverages and restaurants at Google, she is responsible for leading teams working with the largest advertisers in the food, beverage and restaurant space. Some of their clients include Coca Cola, Kelloggs, Kraft Foods and McDonalds. Her main duty is to help these clients figure out how to reach their consumers through digital media, mobile, YouTube and search. Sauder is also expected to lead her Chicago-based team and focus on building Google’s advertising and marketing business these industries.

“In an ad, you are telling a story, a story about the brand and you are trying to find a meaningful connection between your brand and your consumer target,” Sauder says. “What makes a great advertiser is their ability to tell a pertinent story.”

The goal for Sauder and her team is to discover how to build brands in today’s technologically-advanced world. She says that it is similar and different from how it was 20 years ago, but essentially advertising is the same.

“In an ad, you are telling a story, a story about the brand and you are trying to find a meaningful connection between your brand and your consumer target,” Sauder says. “What makes a great advertiser is their ability to tell a pertinent story.”

Last March, Sauder had the opportunity to travel to the country of Colombia to help launch a Google office and says that it was fun to be able to see how an emerging market works. Working at Google, which she says is innovative and down-to-earth, involves traveling and dealing with emerging technology.

Sauder finds it a challenging part of her job to adapt to the pace of technology. She says that helping their customers and advertisers understand how technology is changing, why it matters and what they can do about it can sometimes be a struggle because technology is sometimes changing faster than a company’s ability to change with it. For example, Sauder says that Polaroid is a company that didn’t recognize the need to adapt to new technology due to the changing of consumer behavior.

Since Sauder has a specific focus at Google, she tries to concentrate on the technology that has the largest influence on the food, beverage and restaurant industry. Sauder uses Google Alerts and iGoogle to stay up on industry trends. She says that since technology is mostly additive and she has a good baseline understanding, learning about new and emerging technology happens more quickly.

Keeping up with new technology “is like sports – if you are in good cardio condition, you can do more exercises because you have that baseline and foundation,” Sauder says.

A Strong Foundation from the Missouri School of Journalism

Sauder says that even though technology is rapidly evolving, at its core, advertising, communication and the things that are taught at the Missouri School of Journalism involve essentially the same elements today as they did 20 and even 40 years ago.

“It is vital to be able to create meaningful connections with people of all ages and in all kinds of industries.” Sauder says. “The world is a very small place.”

Sauder says that throughout her career, people have told her she is good at being able to look at the big picture and dive into what matters. She says that this is a very journalistic trait that she was taught at the J-School and has contributed to her success.

She is grateful to have had the opportunity to learn these core values at the J-School and still abides by them today. If she had one piece of advice for current J-School students it would be to learn how to network professionally.

“It is vital to be able to create meaningful connections with people of all ages and in all kinds of industries.” Sauder says. “The world is a very small place.”

Paula Pritzen is pursuing her master’s degree in strategic communication at the Missouri School of Journalism. She graduated from Clemson University in 2010 with a Bachelor of Arts degree in communications. From Spring, Texas, she currently serves as a teaching assistant for a public relations course. Pritzen completed a marketing internship with the University of Missouri Athletic Department after playing for the MU women’s soccer team, and has an interest in sports public relations and marketing.