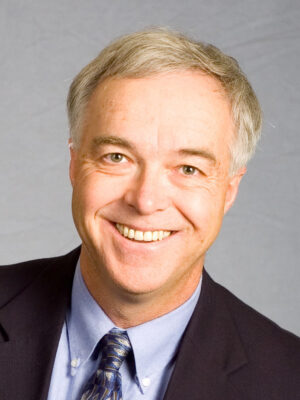 What is your favorite J-School memory?
The highlight for me was actually being able to work at the Columbia Missourian and compete with others for big stories. The School was very crowded in those days, and I remember being on the university beat with three other reporters. Getting that first taste of competition was invigorating. I can remember the first time I broke a significant story about the construction of controversial tennis courts at the then-new Hearnes Center. Seeing that in print told me immediately what I needed to do for a living.

What was your best professional lesson learned at the School?
One of the earliest lessons I learned here was that there were real human beings at the other end of my keyboard. I can remember having to make a call to a family whose child had drowned in a swimming pool. It was extraordinarily difficult to do at age 20. I learned valuable lessons about treating the public with respect and recognizing that whatever you write can have an impact on them.

Were there any J-School faculty or staff who influenced you?
It’s been a real treat for me to come back to Mizzou now and then because so many of the professors I had in 1974 and 1975 are still at the School or in the community. Professors George Kennedy, Brian Brooks, Daryl Moen and Don Ranly all played a major role in helping me shape my education. Don Ranly was a particularly valuable mentor, and Dale Spencer’s media law course led me to law school.

What does the Missouri School of Journalism mean to you?
The Missouri School of Journalism is, of course, an outstanding academic institution and has trained literally generations of journalists to do their jobs professionally and ethically. I think it also has the added advantage of being located in the heartland, where there’s considerably less cynicism than the coasts.

You were on the team of journalists who founded USA TODAY in 1982. From graduating in 1975 to becoming a founder of USA TODAY seven years later, what was that journey like?
I took a slightly different path. It may not comfort today’s graduates, but the job market when I graduated in 1975 was almost as challenging as it is today. I couldn’t find a good opportunity as a journalist, so I went to law school with an eye toward becoming a more marketable reporter. I invested those three years while working for the campus paper and stringing. Then I passed two bar exams – Illinois and Florida – and went right back into journalism with the best job I could have imagined. I joined the Fort Myers (Fla.) News-Press in 1978 as the police reporter/newsroom attorney/rock critic, all for $250 a week. So the law school education paid off. I ended up at USA TODAY in 1982 because the Gannett Company reached out to its newspapers and selected a cross-section of promising young journalists to help start a new national newspaper. Somehow I got picked.

You then moved from your position as editor of the nation’s largest-circulation newspaper to become president of a First Amendment organization. Why did you make this move?
I had a great run at USA TODAY, and it was truly an honor to be its editor. But I had first walked into a newsroom 30 years earlier, and it seemed like the right time to take on a new assignment defending the First Amendment that made my career possible. The First Amendment Center and Newseum do important work helping to educate Americans about these fundamental freedoms and the need to protect them daily.

Some print journalists are weary today with pay cuts, buyouts and the continual and redefining shift from print to online media. Do you think there is room for optimism regarding the future of journalism?
I’m optimistic about journalism in general and newspapers in particular. In the first place, there will always be a market for the work of people who can take complex events of the world and explain them in a clear and concise way. That requires journalists. I admire the blogging community, and as someone who feels strongly about the First Amendment, I think it’s terrific that free speech is literally everywhere on the Internet. But I also believe that over time, people will want to know that their news and information has been checked and that it’s been prepared by people who have no axe to grind. In terms of newspapers, we’ve been very encouraged by a USA TODAY readership program on more than 500 of America’s campuses. With students typically paying their subscriptions through student activity fees, we’ve discovered that if you make a daily newspaper available to college students on essentially the same terms as they get the Internet, they will embrace newspapers. You just have to make papers widely available and economical. That combination is potent. There was an interesting study done at Penn State recently. Penn State has had this program featuring USA TODAY, The New York Times and a local newspaper for a decade now. They surveyed the student body and asked whether students had read a newspaper any time in the previous week. More than 90 percent had read a newspaper in that time frame. So if you make newspapers compelling and easy to get your hands on, young people will respond. That doesn’t mean we won’t see declines in circulation, but there’s a reason newspapers have been part of the American fabric since 1690. They serve an incredibly valuable role in both our communities and our democracy. No one should be writing them off.

You were the first Gannett editor to take a newspaper online back in 1993. As newspapers increasingly pose a greater presence online, how well was the initial push to offer online content received by the public and by the journalists you worked with in the 1990s?
My bosses were not particularly enthusiastic about what I was trying to do. But they said I could do it as long as I didn’t lose any money. Our goals were modest, so we actually were able to publish these early online papers without losing significant sums. It’s important to remember that this was before there was a World Wide Web. There was an Internet, of course, but it had not been tamed by browsers yet. In the early 1990s, the newspaper industry just felt that investing in online was a waste of money. They didn’t see a revenue model. Now they do.

How well do you think students are currently being prepared for the industry?
I’m impressed by the shift in curriculum to address convergence. Those tools are valuable and will help prepare today’s students for an extraordinary range of opportunities. I hope that everyone who has an interest in being a journalist will get that opportunity, but I also know that the skills that are developed at Mizzou will serve graduates regardless of what career they pursue. You can never overestimate the value of communicating clearly and understanding subject-verb agreement. That’s still a big deal.

What stands as the greatest threat to the First Amendment today?
The greatest threat to the First Amendment today is that the American public truly takes it for granted. Those five freedoms – freedom of speech, freedom of press, freedom of faith, the right to petition the government for the redress of grievances and the right of assembly – have driven most of the important social movements in our history. Women didn’t get the vote by sitting at home in the kitchen. They got it by marching and writing and protesting. The civil rights movement was fueled in large part by both freedom of religion and freedom of the press, and yet surveys today suggest that as much as one third of Americans believe the First Amendment gives us too much liberty. These are people who are offended by controversial songs, books or movies or who are suspicious of others’ faiths. But the truth is that the five freedoms of the First Amendment are the most American of freedoms and are truly what make this nation special. We can’t afford to lose sight of that.

What was the impetus for creating “Freedom Sings?”
I took a sabbatical of sorts from the newspaper industry to run the First Amendment Center at Vanderbilt University and to do a little teaching at the law school. I recognized quickly that a sign outside an auditorium that said, “Hear Ken Paulson speak about the First Amendment” was not going to be a big draw. I looked for ways to use entertainment and popular culture to deliver a message about the importance of the First Amendment. “Freedom Sings” began as an evening each year at The Bluebird Café in Nashville, Tenn., where we would invite local musicians to come and sing the songs that somebody once tried to censor. That includes songs by the Beatles, Elvis Presley, Eminem and Francis Scott Key. That went so well that I wrote a stage show to take on the road to college campuses. “Freedom Sings” is now nearing its 12th anniversary and has been seen on campuses from coast to coast.