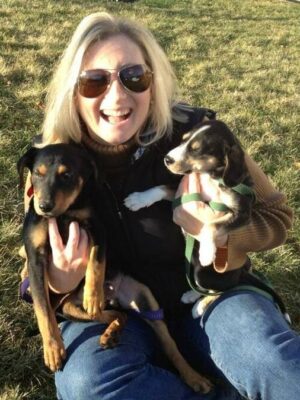 What do you do in your current job?
I do freelance writing, editing, photography, and online content. I work for a dozen or so magazines and websites, I ghost-blog, I build my own websites that generate income, and I write books. Most of my work is in the area of boats and travel, but I also take on passion projects about subjects that interest me, including dogs. My ninth book, “Little Boy Blue: A Puppy’s Rescue from Death Row and His Owner’s Journey for Truth,” was named best pet book in America by ForeWord Reviews after it came out in 2012. My tenth book is due out in autumn 2015 from Lyons Press. It’s going to be about the global industry of buying and selling dogs.

What do you like best about your job?
I am either out working in an exotic place on a luxury yacht, or I am editing and writing in my sweats out of my home office. I was on a 120-foot motor yacht that was built for the king of Spain, for example, for one of my stories. I have traveled to about 40 different countries and islands for assignments. The more exotic places include Fiji, Galapagos, Thailand, the Maldives, Brazil, and Alaska. Photos from some of my stories are at www.kimkavin.com.

Your work has received prestigious awards. Are there any that you are particularly proud of?
The 2005 Arlene for Magazine Articles is especially meaningful. This is a specialty award from the American Society of Journalists and Authors for an article that makes a difference in the community. The winning article was titled, “The Crisis Cops,” published in Northeast, the Sunday magazine of The Hartford (Conn.) Courant. The article describes the dramatic difference specially trained police Crisis Intervention Teams (CITs) can make to people suffering from mental illness. My reporting prompted the governor of Connecticut to announce $2 million in state and federal funding to create CITs in four of the state’s largest cities.

How did you get your job?
I worked at several different publications out of college and eventually was promoted to night metro editor at a daily paper. I learned about an opportunity with Yachting magazine; they had an opening for an executive editor position. I knew nothing about yachts at the time, but my resume showed that I came from a good school, had experience running a staff, and had good journalism experience. Most of the staff then had lots of boating experience, but little journalism experience. They agreed to teach me about yachts, and I agreed to teach the non-journalism staff about journalism. After working there for a little more than three years I realized I could make just as much money doing the same thing working out of my home, so I decided to freelance.

What are you working on currently?
I spend a lot of time making content for www.CharterWave.com, which I built in 2006. It’s won several awards now for editorial excellence and has a monthly readership that rivals many of the world’s premier megayacht magazines. In my spare time, I train for sprint-distance triathlons. I’m trying desperately to beat my younger sister across the finish line just one stinking time!

When did you know you wanted to be a journalist?
I was six years old and in the first grade. I noticed in a book we were given to read that words were spelled wrong. I took it up to my teacher and she helped me a write a letter to the publisher. Everyone in our class got free text books and sunglasses from them. I was a six-year-old and already copy-editing; it was just something I was good at.

What are your recommendations and advice for current students?
Study everything you can; you will use it. I’ve used communication law knowledge, management skills, photography, marketing, writing and advertising in my career. Take every class you can. Focus on one thing, but have a finger of knowledge on everything.

What is the greatest lesson you learned at the Missouri School of Journalism?
Be the go-to person; be the one who knows how to get things done at the end of the day.