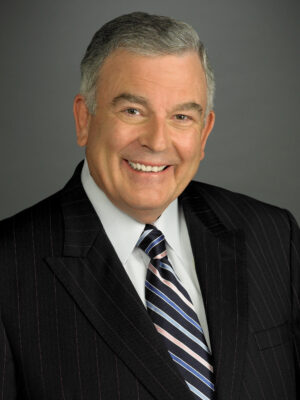 Describe your TV station and what makes it interesting.
Our station is a major ABC affiliate and most of the news that flows out of the Mid-West to the network comes through our facilities and personnel. For news, we consistently rank as the highest rated news viewership in the entire nation for ABC stations. Our 10 p.m. news and 6 p.m. news, which I have anchored for some 30 years, are consistently rated number one in the Kansas City market.

What are your responsibilities?
My job is primary news anchor, editor and reporter.

How did you get your job?
I was anchoring the 10 p.m. news and sports on KOMU-TV (Columbia) on Memorial Day, 1968, when the president of KMBC-TV hired me off the air and offered me a reporting and anchoring job.

What are you working on currently?
My job as principal anchor, editor and reporter keeps me focused and permits me to have very little free time to pursue other projects. I do, however, write a column, Letter from Larry, for our website.

What do you consider to be your greatest professional achievement?
For 43 consecutive major rating periods or sweeps, our 10 pm news, which I anchor, has been rated number one in the Kansas City television market. It is something that has never happened before.

What makes you good at your job?
The skills and support in television news that I received at the University of Missouri School of Journalism has much to do with the success I’ve achieved. After all these years, I still use the fundamentals I learned in Columbia.

Who would you like to work with and why/ or where would you most like to work?
I have always thought about syndicated programming whether it be something in news or related talk. But my requirement would be that I would be based in Kansas City and could continue my local television news work.

What are your next career steps?
I grew up in the Kansas City area, went off to school at the University of Missouri and then returned home. I had the opportunity to work at the network level for a few years, at CBS and ABC, and then again had the opportunity to return home. Any new area or professional growth or promotion would have to be based in the Kansas City market.

What is something about you that might surprise people?
I am an avid vegetable gardener and horseback-riding enthusiast. I’ve also written a book on gardening, The 20×30 Backyard Gardening Guide.