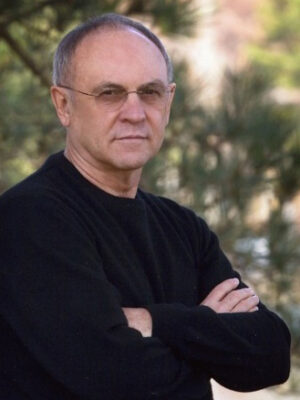 Larry Van Dyne, BJ ’67, grew up on his family’s beef cattle farm in northern Missouri, four miles east of Newtown. He attended high school at one of the smallest schools in the state. His 1963 graduating class was a group of 18 students.

In high school, Van Dyne didn’t think he was going to one day become a journalist working in Washington, D.C. In fact, by the time he graduated, he had no newswriting experience and very little actual writing experience in general – just a few essays, called themes at the time.

However, what he lacked in writing experience, he more than made up for in knowledge of grammar and use of the English language. His high school English teacher, Pearl Tipton, stressed the importance of a well-versed education in grammar and made her students do drills in workbooks all the time. This proved to be a useful skill when he began his journalism education.

Tipton and the school superintendent, Jerome Van Gels, encouraged Van Dyne to enroll at the University of Missouri. They felt that Van Dyne could make it academically at MU, which offered a wider range of courses than smaller public colleges in Missouri. Van Dyne followed their advice and the advice of his family and began his undergraduate studies at MU in the fall of 1963.

“MU was the most visible public university in Missouri,” says Van Dyne, “it was familiar, not far from home, and affordable.”

Van Dyne began his studies at MU in the College of Arts and Science, taking liberal arts courses, such as English composition and history. He started out as an American history major but all that changed in his second semester when he began working at the Maneater, MU’s independent campus newspaper. He decided to major in journalism after his editor told him that he had potential to become the editor. At the time, being a journalism student was a requirement to become editor of the paper, which quickly became Van Dyne’s goal.

When he entered the journalism school as a junior, he spent most of his time working at the Columbia Missourian, for a required reporting class, and at the Maneater simultaneously. While working at the two different publications, he learned the ins and outs of the business of journalism. He worked on several different beats; his first was noon hour at city hall, a relatively quiet beat. He rarely had stories to cover since most city council members ate lunch at this time. He had the most fun and learned the most when he was assigned to an evening beat, called nightside reporting, where he covered several public meetings and some controversy.

One of Van Dyne’s most memorable classes at the J-School was a feature writing class he took with Professor Tom Duffy. Van Dyne says Duffy was a tough teacher who made his students work hard. Duffy was famous for saying, “You can write a good feature about any human being.”

“Duffy once gave us a note card with the name, address and phone number of a local Columbia resident he found in the phone book and told us to go write a feature. I had to drive 10 miles or so from Columbia to interview a tenant farmer who lived in the Missouri River bottom,” says Van Dyne.

When Van Dyne arrived at the house, the farmer’s wife answered the door and informed him that her husband was plowing the field and to look for him outside. He proceeded to interview the man while riding on the back of his tractor.

“He was one of the least talkative men I had ever interviewed, but I managed to write a story out of it,” says Van Dyne.

Van Dyne’s experiences at MU prepared him for the real world of a journalist. Working in the newsroom taught him what to expect and he developed the ability to write quickly, economically, and clearly, with a sense of what was important.

In the last semester of his senior year at MU, Van Dyne applied for a fellowship at the Harvard Graduate School of Education. Every year, the Ford Foundation awarded the fellowships to two people who were Missouri residents or attended college in Missouri, a full-ride academic scholarship to the school. Harvard was attempting to geographically diversify its student body, then dominated by graduates from East Coast universities and colleges. Van Dyne was awarded the scholarship in the fall of ’67.

After finishing his classwork at Harvard, Van Dyne stayed in the Boston area and completed a one-year internship at the Boston Globe as an education reporter. He covered stories about elementary and secondary schools, specializing in stories about the anti-Vietnam war movement, colleges, universities and school desegregation. After completing the internship, he was offered a full-time position and worked there from 1968-1971. He then went on to get a job at the Chronicle of Higher Education in Washington D.C.

At the Chronicle of Higher Education, he worked as a national correspondent. He traveled the country writing feature stories about universities, professors, research, and sports. He wrote stories ranging from politics at the City University of New York to football scandals at the University of Oklahoma.

He left the Chronicle in 1980 to take a yearlong mid-career journalism fellowship at Stanford University, and then he returned to Washington in the spring of 1981 to work at the Washingtonian. He was a senior writer for the Washingtonian for 30 years and is now a contributing editor. He has written stories on politics, government, the arts, business, sports, the environment, urban planning, the media, history, education, transportation, agriculture – the list goes on and on. Van Dyne enjoys writing about a diverse group of topics because it keeps him interested. He says that while much journalism these days involves specialization, he has remained very much a generalist with a desire to write about lots of different subjects.

“I have a low threshold for boredom,” said Van Dyne, “I consider writing a way of educating myself in the things that interest me.”

He has won more than 20 awards for reporting and writing. His winning stories include a story on the history of Washington bridges for which he was given a national award from the American Society of Civil Engineers. He was also given an award from the Education Writers Association for a story on an attempt to oust the headmaster at St. Albans School in D.C.

Van Dyne tries not to take journalism awards too seriously, but his proudest moment was being a finalist for the National Magazine Award in Reporting for a narrative re-creation of the crash of an Air Florida airliner into the Potomac River in 1982.

Throughout his career, Van Dyne has held dear his memories at Missouri and has kept in touch with other Mizzou graduates. Some of his friends include John Walsh, the founding editor of ESPN; Associate Dean Brian Brooks, who was in his class and also a member of his fraternity; Bill Tammeus of the Kansas City Star; and Manny Paraschos, a professor at Emerson College in Boston. He continues to manage his parents’ beef cattle farm in Northern Missouri and visits old friends in his hometown. Van Dyne also remains a die-hard Tiger fan and watches all the football and basketball games.

Van Dyne learned many important lessons as a student at the journalism school that have helped mold him into the writer he is today. But there were a couple of lessons that he suggested all journalism students should remember.

“Be curious about everything,” he says, “and read good writing, both fiction and non-fiction.”