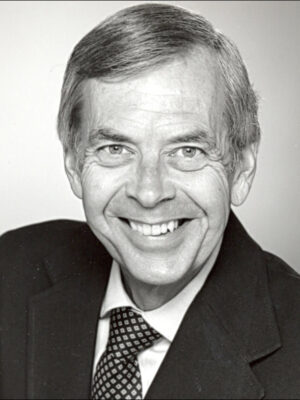 After 56 years on the radio, sportscaster Larry Zimmer, BJ ’57, still loves the feeling of speaking to listeners through the radio waves. It is a medium that allows him to bring drama-filled public events to the homes of thousands of people.

Zimmer’s understanding of the intimacy of radio broadcasts developed from the early radio programs of his youth. As a child he would sit with his grandfather and listen to national and local sports broadcasts. With his father stationed in the South Pacific during World War II, Zimmer also eagerly listened to the radio for war news. Those shortwave AM radios made the world smaller, and much more private.

These experiences ultimately influenced the trajectory of Zimmer’s career, convincing him that telling stories through the radio waves was the only vocation for him.

Getting Started in Radio

Zimmer started his broadcasting career while a student at the Missouri School of Journalism. His first job was at KFRU-AM, a radio station co-owned by legendary radio managers Mahlon Aldridge and Henry Waters Sr. Aldridge saw something special in the sportscaster’s ability to craft compelling narratives and hired Zimmer as the station’s sports director. Over the next several years, he covered University of Missouri baseball as well as Hickman High School basketball and football games for the radio station.

His years at the School and KFRU prepared him for his next radio opportunity. In 1966, he moved to Ann Arbor, Michigan, where he worked at WAAM radio and became the voice of the University of Michigan Wolverines. Five years later, he pulled up stakes and moved to Colorado.

Zimmer found snowy slopes of the Rocky Mountains, with their wide-open azure painted skies, ice-kissed peaks and tight-knit communities, inviting. It is here that he has spent more than 40 years as an award-winning broadcaster, serving as the play-by-play voice for the University of Colorado Buffaloes and the Denver Broncos.

In-between games, Zimmer took advantage of the nearby mountains and became an avid skier. His experience on the slopes eventually gave him the background necessary to earn a spot broadcasting Colorado skiing events.

Zimmer worked the skiing booth for many years during his four decades in Colorado. His reputation as a strong-voiced sportscaster eventually earned him an invitation from CBS Radio to broadcast alpine and Nordic skiing events at the 1980 Winter Olympics at Lake Placid, New York.

Zimmer was rewarded for his service to Colorado’s skiing industry with an induction into the Colorado Ski and Snowboard Hall of Fame, making him the first broadcaster given such an honor.

“Getting inducted to the ski hall of fame, I think, is one of my greatest achievements because I broke barriers,” Zimmer says.

It was, though, just one of many numerous journalism awards and recognitions Zimmer received during his career. Among them are being named Colorado Sportscaster of the Year five times as well as induction into the Colorado Sports Hall of Fame, the University of Colorado Athletic Hall of Fame and the Broadcast Professionals of Colorado Hall of Fame. In 2002, the National Football Foundation and the College Football Hall of Fame presented Zimmer with the Chris Schenkel Award. The award is given to college football broadcasters who have had long and distinguished careers in the booth.

The Fifth Down Game

Zimmer worked the Denver Bronco booth for 26 years before retiring to concentrate full time on calling games for the Colorado Buffaloes. The logistics of traveling back and forth from Saturday night Buffalo games to Sunday afternoon Bronco games proved too time consuming, so he chose to stay with the Buffaloes.

One 1990 game, in particular, is one Zimmer and many Mizzou football fans will never forget. Dubbed “The Fifth Down Game,” the Buffaloes and the Tigers traded leads and momentum swings. In the fleeting minutes of the game, the Tigers led 31-27, but the Buffaloes got the ball to Missouri’s three-yard line with 31 seconds left and four downs to score.

As the game wound down, the referees failed to flip the fourth down marker on the field, essentially giving the Buffaloes a fifth down – and the jolt they needed to score the game’s final touchdown. It is a moment that neither the crowd nor Zimmer will ever forget.

“Nobody noticed the mistake,” Zimmer says. “I didn’t spot the mistake myself until after the game was over.”

Football games that come down to the final seconds, yards and inches are tailor made for radio, Zimmer says. He knows the timber of his voice reaches those hoping and praying that last fleeting second and that last remaining yard will break their team’s way. Zimmer uses the inflection of his voice to build anticipation and excitement of the moment to those who are not there to experience the pain of loss or the thrill of victory in person.

He knows his commentary stirs emotions because he was stirred by emotional football games and sports starts when he was young. As a 10-year-old dreaming of a career in radio, Zimmer could not have imagined where that career would ultimately take him and the people he would meet because of it.

Beyond the Sportscaster’s Booth

As a sportscaster, Zimmer has had the privilege of meeting and befriending hundreds of sports stars, including Broncos Hall of Fame quarterback John Elway.

Zimmer covered nearly every game Elway played in with the Broncos, saying it “gave me a lot of access to him, both as a player and as a man.” Zimmer says Elway is a “genuine man and a great man.” Fans see the public face of their sports heroes, but they rarely see the private moments that make the men. Zimmer’s job allows him to see those private moments.

His job also has afforded him the chance to rub elbows with the likes of well-known sportscasters Bob Costas, John Madden and Al Michaels. Zimmer shares one unique character trait with these broadcast legends: They are all high-caliber raconteurs. It takes incredible skill to explain the complexity of a game in narrative form.

“I compare radio coverage of any event to being like an artist,” Zimmer says. “You must paint a word picture for the listening audience.”

He contrasts this with television broadcasting, which is tightly produced. It puts the director in control of the shots, while the sportscaster is relegated to recounting for the audience what they are already seeing on their TV screen. In Zimmer’s opinion, television loses much of the creativity of broadcasting for sportscasters.

“You might have a million listeners, but actually you are talking to one or two people,” he says. “You are being invited into the family room, the living room. You are a guest.”

Christopher D. White, from Kansas City, Missouri, is earning his master’s degree in journalism with an emphasis in strategic communication. He has served as the state chairman for Young Americans for Liberty and as the student campus coordinator for Students For Liberty, both of which are Washington D.C.-based nonprofit groups. White is an associate editor and reporter for The College Fix, an online publication in Washington, D.C. He plans to pursue a career as a political consultant.