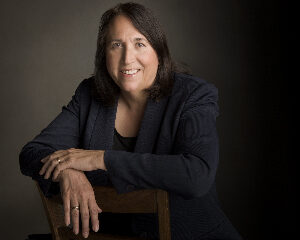 Margaret “Peggy” Engel, BJ ’73, has had a successful 38-year career in journalism. She is the executive director of the nation’s oldest writing fellowship, The Alicia Patterson Journalism Foundation, which supports investigative journalists and photojournalists worldwide. She is the former managing editor of the Newseum, the $450 million news museum in Washington, D.C. and also is a playwright. Her first play, “Red Hot Patriot,” written with her identical twin sister, is about the journalist Molly Ivins. Kathleen Turner starred in the role in Philadelphia and Los Angeles and there have been a dozen other productions of the play with more to come. She is a former reporter for the Washington Post, Des Moines Register and Lorain (Ohio) Journal and her work has been nominated four times for the Pulitzer Prize.

What do you do?
I offer help to dedicated and inspiring journalists to undertake their passion projects. Daily deadlines can postpone or derail the stories that are most important to a journalist to tell. The Patterson family established a foundation to honor Alicia Patterson, the crusading founding editor of Newsday. It gives yearly and half-year grants to journalists to complete the big story they long to do. I handle the outreach to candidates, the judging, editing and administrative tasks of giving away these journalistic lifelines.

How did you get your job?
The female network. A friend who was a former fellow recommended me.

What other work have you done?
I had the unorthodox experience for a journalist in getting to help build a huge museum, where I spent eight years developing and planning the exhibits for the Newseum. I’ve done three books on America’s best baseball parks, both major and minor leagues. So I’ve crossed the country six times with my family doing that, really getting to know every town. I’ve been to all 50 state capitals. I’ve also done three books with my twin sister on regional American foods, and we still do some writing on that for Saveur Magazine and others. The series was turned into a show on the Food Network, and it’s now in its ninth year. We’re still named as the producers all the way through, but we were the active producers for the first two seasons. We appeared in two of the hour-long specials that they still run—one for Christmas and one that, I think, was for a ballpark or a barbecue that I still see every once in a while. It’s wonderful to work with a twin sister or a husband. It’s a lot of work. I’m glad they’re in my path.

Do you find yourself taking on new writing assignments?
I still seem to go back to those same subjects, once combining both of them. March 30, 2008, was the opening day of our new ballpark in Washington, D.C., and The Washington Post, where I used to work, had me cover the concessions. So there I was at the ballpark covering concessions with other members of The Post. I’ll never give up those passions, I guess.

How did you become interested in food writing?
When I was working at the Lorain (Ohio) Journal, my first job, I tended to get edible souvenirs or see what companies were manufacturing in the new areas I visited. My twin sister was doing the same when she was working for the Des Moines Tribune, which ceased publication in 1982, and then the San Jose Mercury. We just kept doing that sort of as a hobby for about five years. Everywhere we traveled we’d check out the local regional foods – not restaurant foods, but the local manufactured foods, sort of hometown food nostalgia.

How did you benefit from this passion?
It was a great antidote to the depressing journalism that I was writing. You know, I was writing about miscreants and thieves, people who were cheating other folks and bad doctors—the type of journalism where people hang up on you a lot. So it was a wonderful balance for my twin and me to be writing about these “Mom and Pop” small companies that were making such extraordinary products and also really put the lie to the notion that we’re all just one big fast food nation. It was a way to really see and explore America, and I still do things like that. Every year I get to be a judge at the South Carolina Peach Off. People from all over make these amazing recipes with peaches, and I get to judge them. I love small-town America, food wise. It’s just a wonderful way of exploring this country and to feel really good about the enterprise and the high quality that is out there.

Do you serve on boards or commissions?
For more than 20 years I’ve been working with the Alicia Patterson Foundation, which is an extraordinary foundation that gives money directly to journalists to do the big stories they always said they’d do if they didn’t have deadlines. They take yearlong or six-month fellowships and produce extraordinary journalism. Many go on to write books. Steve Weinberg had a Patterson fellowship, and his research on Ida Tarbell is now a published book, Taking on the Trust. It’s that kind of really important journalism that the Foundation funds, and it’s just been a constant. I’m active in Investigative Reporters and Editors and have been a member and speaker for more than 20 years. I also serve on boards of the Robert F. Kennedy awards and the Fund for Investigative Journalism, which is another group that gives money directly to journalists to do important stories. I really think that’s a model that works well and creates important news stories that otherwise would not get done.

What is the best professional lesson you learned at the J-School?
No whining. Just do it. There were really a lot of very tough professors who didn’t want to hear a lot of excuses about why the story wasn’t in, why the picture couldn’t be taken, why you couldn’t get that interview. It was very much just like the Nike philosophy of “just do it.” And that’s 90 percent of it. I also appreciated the real attention to proofreading and the fact that you would get an F on a paper if there were more than, I think, two or three proofreading errors. That was great preparation.

What was unique about being a journalist in Columbia, Mo.?
We had so many journalism school students when I was there that I think we had three people covering the Chamber of Commerce. The people of Columbia really have to get some sort of badge of honor. Everybody’s been photographed, interviewed, reported on. It would be a wonderful laboratory experiment to go interview all the people of Columbia and ask, “How do you view the First Amendment versus every other small town your size?”

What advice do you have for current students?
This is the world’s best profession. Journalism is spectacular. You don’t want to go in it for the money because that’s not why people go into this business, but you will meet the most extraordinary practitioners of this art – people who are selfless, who are smart, who have a heart, who want to make the world a better place, and who are out there morning, noon and night working on behalf of the public. They are the people at the boring late-night meetings finding out that a school system’s over-paying for the milk shake machines. They are the ones standing outside the men’s room demanding that the school board stops meeting in private and excluding the public. They are the ones being the public citizens that we don’t have time to be. And I obviously think they should get a lot more praise, a lot more support.

What worries you about the future of journalism?
It terrifies me that we have such low estimation of journalism despite all the good we do. We take very little credit for the amazing stories that we break day in and day out. And we just get tarred as being a vulture pack swirling around Britney Spears. Well, that’s an infinitesimal number of journalists, and we have a very big tent that covers everything from the National Enquirer rewrite desk to The New York Times business desk.

What is your favorite J-School memory?
There had been a gas leak in downtown Columbia somewhere, but by the time it had gotten phoned in and a photographer sent, it had been an hour and a half. And everything had been fixed up, and there was no problem. So the photographer calls back and says, “There’s no picture here.” So (professor) Tom Duffy grabs the phone, and he goes, “This is Duffy. Get the picture.” And slams down the phone. The poor guy comes back with a picture of the sign from the Columbia gas company, but it was a picture. He never forgot that lesson that the situation may not be optimal when you get there, but you have to somehow communicate the story. That was sort of a newsroom drama moment.