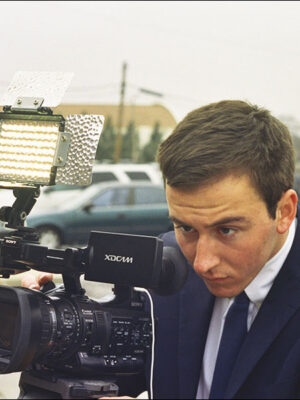 Mark Bergin, BJ ’15, thinks of himself as a Swiss Army Knife, a man with all of the tools to get the job done in a busy television newsroom. He credits much of his success and career path to the hands-on experience he received at KOMU-TV during his studies at the Missouri School of Journalism. Working at mid-Missouri’s NBC affiliate as a student honed his news chops and prepared him to work in Knoxville, Tennessee, one of the top television markets in the U.S. as a digital producer.

Why did you decide to come to Mizzou?
I knew I wanted to pursue a career in journalism, and I knew the Missouri School of Journalism was an elite program. It was an easy decision once you factored in the strong base of prominent alumni across the world, the ease of establishing residency in order to pay in-state tuition, a beautiful campus, competitive sports teams, a strong Greek community and a top-notch recreation center. I can’t imagine attending school anywhere else in the world.

How has your “Missouri Method” education shaped your career?
I had real-life experience working in reputable professional newsrooms, both at school and through internships – even before I graduated college. Most other college graduates at other journalism schools across the country cannot say the same thing. There’s a huge difference between working at a newsroom that operates as an NBC affiliate for mid-Missouri, such as KOMU-TV, and a student-run campus media outlet. Even the most trivial jobs in a newsroom are vital to the news production and gathering process. The Missouri Method allows you to gain vital experience in multiple roles.

When did you first realize what path you would take with your career?
I started out thinking I wanted to be primarily on-air either as a reporter or anchor of some sort. That quickly changed once I learned more about what goes into a TV broadcast. It’s not that I wasn’t comfortable being on-camera, but I’m my own harshest critic and a perfectionist by nature. I planned on attending the Society of Professional Journalists conference in Nashville at the start of my senior year in fall 2014, but didn’t because I didn’t think I had anything to distinguish myself as a journalist compared to my peers. It was a wake-up call. I asked myself, “What can I do differently to make myself stand out?”

What was your most beneficial J-School class?
Easily, it was Emerging Technologies in Journalism with Professor Jim Flink. It wasn’t just the theory of the emerging technologies, but actually trying out new and best practices in the newsrooms we were assigned to. The concept of the class was to work at a newsroom and provide high quality content for them. At the time, KBIA-FM’s (mid-Missouri’s NPR member station) digital content director left for a job in San Francisco, so we given control of operating every platform available for KBIA to distribute content via their content management system, social media pages and the like. We were given the keys to the kingdom if you will, and it was hard work all while trying to attend class. From there, KOMU 8 News interactive director Annie Hammock hired me to work as a digital content specialist for the station for my senior year. I applied many of the same concepts I learned while working at KBIA for KOMU. Any time a reporter needed any kind of web extra to add to their online story, I was the person assigned to help create it. If we knew about an event well in advance, we could cater our web coverage and build out interactive features, including graphics and maps, to provide more complete coverage.

How did you get your first job?
Martha Jennings, my news director at WBIR-TV, reached out to me through email about a digital producer opening at the station. She had come across my National Signing Day story I’d written with one of my peers at KOMU. In effect, she said, “Come do this for our station.” I’m grateful to her for reaching out to me. It’s awesome to work for a company that values reaching its audience with top-quality work in as many different mediums as possible. I can’t think of a better forum for a recent graduate to cover such a wide-ranging variety of subject topics. It helps having a handful of Missouri graduates in the newsroom, too.

Any advice for current students?
Work as many different jobs as you can in a newsroom. Pick the one you are most passionate about and pursue that as a career. Even if you don’t like working a certain job, understanding it helps you do other jobs in the newsroom better. Also, take the time to learn from peers who are older than you, and be willing to help someone else out who needs it. Someone probably helped a person with more expertise than you get to where they are in their career.