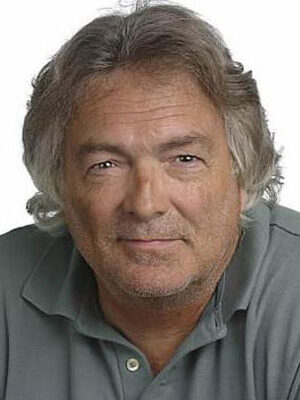 What do you do?
On Feb. 11, 2012, I covered my last athletic event for The Kansas City Star after 41 years with that newspaper either as a correspondent or a full-time reporter/editor. After filing my story on Missouri’s basketball victory in Columbia, Missouri, over Baylor, I officially retired, having covered high schools for one year, Royals major league baseball, the former Kansas City Kings of the NBA, Kansas State in the old Big Eight Conference, Missouri in the Big Eight and the Big 12, eight Olympic Games, as well as working for Star Magazine and serving as an assistant city editor and an assistant sports editor, all at The Star. I do just about anything I want to these days, which includes playing guitar and riding a bicycle every day I can, and taking great joy in traveling with my wife of nearly 42 years, with whom I graduated from Mizzou in 1972 and fell in love with in 1969.

How did you get your job?
My first job in journalism was as a campus correspondent at Missouri for the Joplin Globe. I got that job on something of a whim, walking into the publisher’s office one summer after my senior year in high school, dressed in sandals, cut offs and a T-shirt and pitching an offer that I was going to Mizzou in the fall, and that I planned on writing articles about Joplin-area athletes. I told the Globe that if they liked the articles they could run them and, if they felt like paying me, anything they paid would be appreciated. Surprisingly, the Globe said yes. My senior year at Mizzou, I served as sports campus correspondent at Mizzou for The Kansas City Star. And, in February of that year, The Star offered me a full-time job, which I accepted on the spot, even before they said what the job would pay, which turned out to be $650 a month.

What was the best professional lesson learned at the J-School?
My best professional lesson was actually from the now-deceased Dr. Robert Knight, who did a lot of work with high school students before they came to college. My junior year of high school, I went to a journalism workshop. We had to go out and find stories. While I was there, there was an anti-war protest in front of Memorial Union. I got talking to people, even though I was not assigned to the story. I took the idea to Dr. Knight and he said to write it up and turn it in. I got third place in spot news. Frequently, it is the story you don’t know is there that you pick up and is better than the story you are out to get.

What do you consider to be your greatest professional achievement?
There are actually two. The first is that I was in Cuba doing prep work for the Pan-American Games. I went down with 16 other journalists and with the U.S. Olympic committee. I went down with the idea that I wanted to do some lifestyle stories. I wanted to show how the world stopped after the revolution. I ended up with 11 or 12 lifestyle stories. We got an interview with Fidel Castro, and that worked well. It was well received and the most satisfying stuff I’ve done. It may not be what people remember my writing for, but it is what I remember. I also wound up writing the lead news story on the collapse of the Hyatt Skywalks in Kansas City while I was an assistant city editor for The Kansas City Star and The Kansas City Times. The papers won a Pulitzer for their coverage and I was a small part of that, by happenstance, being one of the first two journalists on the scene, and then spending the next 24 hours back in the office helping edit and plan stories and coverage. I remain mindful of the work of dozens of reporters and photographers who over the course of the initial hours and continuing months did their jobs with such passion and diligence.

What made you good at your job?
Sometimes, absolutely nothing. Sometimes, I wasn’t good at my job. I wrote people stories; what they were about. It wasn’t my story, it was their story. I tried to be fair. I tried to write like Stephen King would have written it. I used to read King to develop my own style. I tried to show people where “the cracks in the sidewalk” were. I think people like to read about what other people are like. If I were good at something, it would be imagery in my writing.

What are your next career steps?
I have, in retirement, embraced my other passion, which is writing, playing and recording music. The typewriter and laptop have been replaced with four acoustic guitars, a banjo and the proper equipment to mix and record – so far – 26 cds of largely music that I share with family and friends.