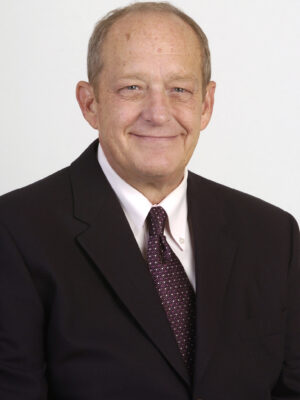 A young Randell Beck decided that he wanted to be involved in news after reading a biography about renowned newspaper editor William Allen White. The nine-year-old was intrigued with the fellow Kansan’s politics, his writings, his Pulitzer Prize and his role as a change-agent in the Progressive movement in the 1940s.

What was less clear, though, was how to begin such a career. Born in 1953 in Clay Center, Kan., with a population of fewer than 5,000 people, it was a very small town with nothing much to do. “I remember most kids trying to find ways out of the town,” he says.

Beck attended Kansas State University, only 78 miles from his home, after his high school graduation in 1971. After three semesters, however, he realized school was not his main priority. He quit and spent the next few years traveling around the U.S. and lived in California, Louisiana, Texas and Arizona. Beck learned what it was like to be dead broke, alone and having to panhandle for food in Arizona. The experience, he notes, “gives you an appreciation for lots of things, including college and a career.”

By 1976 he was ready to be serious about his education and enrolled in the Missouri School of Journalism.

Beck’s life at Missouri was soon filled with deadlines and beats to cover for the Columbia Missourian. He along with classmates Cameron Cohick, BJ ’79, and Jim Pinson, PhD ’96, felt empowered in the post-Watergate era while they covered politics for the county beat. Beck remembers trying to prove himself to every official he met that semester. “At that time in Columbia, the perception was that the Tribune was the professional local paper and the Missourian was a bunch of students,” he says.

Professor George Kennedy and other faculty taught him that being a reporter is a calling, not just a job: “They fostered the idea that being a journalist was a special deal. It was unique and you were serving the broad public interest in a different way than anyone else.”

Beck wanted to prove to the people he covered and those who read the paper that he was a professional reporter. He strove to break stories before the Tribune reporters and felt the editors at the Missourian fostered that approach. “The Missourian was an exciting and thrilling place to be,” Beck says.

Professor George Kennedy and other faculty taught him that being a reporter is a calling, not just a job. Beck learned that journalism should be used as a force for good in helping the community.

“They fostered the idea that being a journalist was a special deal. It was unique and you were serving the broad public interest in a different way than anyone else,” he says.

Beck credits the lessons he was taught by his professors and the work he did at the Missourian for instilling in him the values of honesty, fairness, and boldness.

After graduating in May 1979, Beck interviewed for two jobs. One was in Rochester, N.Y., on a cold and snowy day. The other was in Memphis on a perfect 75-degree “bird-singing” day. He accepted the Memphis Press-Scimitar offer on the spot.

Beck became the cops’ reporter and spent many nights out on the streets of Memphis covering crime, trials, courts and the gritty side of the city’s life. “I hated Memphis but loved the job,” he says.

In 2001 Beck accepted a position as the executive editor at the Argus Leader Media in Sioux Falls, S.D. Beck had worked with publisher Arnold Garson at a previous job, so when there was a vacancy, Garson contacted him. In 2008 Beck became president and publisher after Garson left to become publisher of the Courier Journal in Louisville, Ken.

“I took over around the time the country hit recession,” Beck says. “Another factor is that newspapers are changing dramatically to online. The situation is more important than ever for newspapers to hold high standards of the news they produce.”

In his position, Beck focuses on both the journalism and the business, trying to balance the news and editorial content, advertising and circulation.

“As publisher it boils down to communicating the value, importance and relevance of this media company of newspapers in the world where newspapers are being challenged in their traditional models,” he says. “Protecting and preserving resources in the news department is very important.”

Beck is conscious of how the decisions he makes will affect his staff. Having been a journalist his whole career helps him connect with employees and ensure the quality of hard-hitting journalism. Beck looks forward to producing pieces that carry a risk, challenge the government or might be unpopular with some readers.

Beck has earned many awards throughout his professional career, including being a six-time winner of the Gannett President’s Ring and the 2008 Award for Editorial Leadership from the American Society of Newspaper Editors.