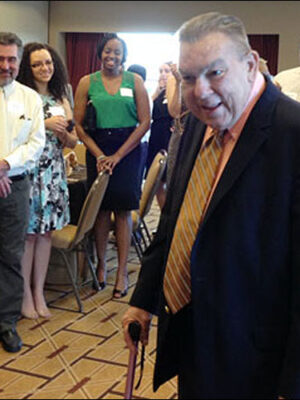 Rich Holden, BJ ’71, MA ’73, believes that a lot of life comes down to saying yes to opportunities.

In 1976, Holden’s boss gave him an opportunity: He could become a part of the founding team of the Asian Wall Street Journal in Hong Kong. But there was a downside: He would leave behind his friends and family in New York.

“Everyone thought I was throwing my life away,” he says.

But even at that point, Holden says, he and his wife believed in the importance of taking risks.

“When you have an opportunity to do something, do it,” says Holden. “This way, in 20 years you won’t be thinking about the opportunities you didn’t take but rather remembering the ones you did.”

Dating back to his decision to attend the Missouri School of Journalism, Holden’s life and career has revolved around his ability to take advantage of opportunities as they come his way.

Holden believed he wanted to study advertising at the School of Journalism. After all, his mother had been an advertising major at the school.

“So naturally, little Dicky was going to be an advertising major,” Holden joked.

His first assignment in his introduction to advertising course was to develop a print ad for the Norelco electric razor.

Holden wanted to shock the audience. His ad contained a graphic image of two men with the caption, “You can’t slash your wrists with the triple blade, but you can hang yourself with the cord.”

The ad did not go over well with advertising professor Frank Dobbins.

“This is the single most disgusting thing I have ever seen in my 30 years of teaching,” was the comment Holden remembers hearing.

“Everyone thought he [Morgan] looked like Clark Kent in the old Superman TV series,” Holden says.

“He [Professor Ernest Morgan] taught me that good, precise writing was more valuable than the flowery style many of us attempted,” Holden says.

The course taught students the basics, from AP style to the inverted pyramid. Morgan impressed Holden with his knowledge.

“He taught me that good, precise writing was more valuable than the flowery style many of us attempted,” Holden says.

Morgan helped Holden better understand the concepts of news writing and editing, and passed on a lesson Holden still remembers today: If you can’t draw the reader into the story from the lede you wrote, you failed.

As part of an advanced reporting course the following semester, Holden became part of the sparsely staffed sports writing team for the Columbia Missourian. He was kept busy.

“If you worked in sports, there were 8-10 of us with three pages to fill everyday, while there were 250 news students who were filling maybe 10 pages a day,” Holden says.

Holden liked to cover anything offbeat, such as a two-part series he wrote about sports inside the Missouri state penitentiary.

Holden’s work at the Columbia Missourian developed his news writing and editing skills. Most importantly, he saw a future in journalism for himself.

Enrolling in Graduate School and ROTC

When Holden graduated with his bachelor’s degree in 1971, a military draft lottery for the Vietnam War was being initiated. Every day of the year was represented by numbers 1 through 366, with each number corresponding to a birthdate. The random process was considered a fair way to call eligible men to active service.

Holden’s birthday, Nov. 13, was one of the first drawn. This practically guaranteed him a trip overseas.

In order to delay his drafting process, Holden enrolled in the journalism master’s program. He ran the Missourian copy desk three nights a week while working on his graduate degree. He also joined the Air Force ROTC program because it was the only two-year training program offered at MU.

Holden hoped the military wouldn’t need him when he finished his graduate degree and ROTC training. They didn’t but not because the war was over.

A few weeks before graduation Holden received a letter from the Air Force personnel headquarters. It said the Air Force required its pilots to have outstanding dental health because teeth with cavities or other dental problems might fall out at high pressures. Holden’s teeth disqualified him for flying.

Holden decided go into active duty after graduation for three months, which guaranteed him no reserve obligations.

Just as Holden was prepared to start his professional career, an opportunity presented itself.

William Bickley, BJ ’34, MA ’35, Holden’s editing professor, recommended Holden to one of his former students. Harlan Byrne was the Wall Street Journal’s assistant bureau chief in Chicago and was on campus for a recruitment visit. Bickley asked Holden to interview with Byrne.

During the interview, Byrne told Holden that the Journal didn’t cover a lot of sports, to which Holden replied that he was more interested in being an editor anyway. Holden work at the Missourian’s copy desk had sparked his interest in editing.

Byrne believed that there was a fit for Holden at the Journal.

“Since it is almost impossible to judge someone’s copy editing ability, I was given a chance to prove myself,”  Holden says of his weeklong tryout in New York for the position.

Holden was offered the position and started immediately after his three-month commitment with the Air Force ROTC. He was the first person straight out of his class to get hired as a copy editor at the Journal.

Holden almost said yes right away. But first, he says, “I thought I should check with my wife.” Luckily, she was intrigued by the prospect and eager to go as well.

“Everyone likes to claim they were the first at something,” Holden says. “I was no exception.”

“I loved the job,” Holden says, but the hours were grueling and the adjustment was tough. Asian Journal editors worked in the same time zone as those in New York, meaning that his days started at midnight and went until 10 or 11 a.m.

On Fridays, Holden taught two copyediting and business writing graduate-level courses to the Chinese University of Hong Kong. He did not speak Mandarin but still found ways to connect with his students, such as sitting with them at lunch.

“I got a kick out of the students,” Holden says, most of whom “were only a couple of years younger than I was, calling me ‘Professor’ Holden. That’s where I first became interested in teaching and working with kids.”

“Everyone likes to claim they were the first at something,” Holden says. “I was no exception.”

Within time, however, his irregular work hours took their toll on him.

“Three years of getting up at 11 p.m. and getting to work by midnight finally got to me,” Holden says, laughing. And so, Holden returned to the Journal’s New York desk. He continued to work there for 19 years.

In 1992, Holden received a phone call from Peter Kann, a former colleague in Hong Kong. Kann told Holden that he had a job offer he thought he’d enjoy: the position of executive director of the Dow Jones News Fund. The job, among other things, focused on mentoring young journalists in the field.

Holden thought the job would be an interesting challenge. Plus, “you don’t say no when the CEO offers you something,” Holden says.

Holden began his career as the fourth executive director of the Dow Jones News Fund in 1992. The Fund aims to foster an interest among high school and college students interested in journalism careers by mentoring and helping to provide opportunities for its students. Its mission is to encourage young people to pursue journalism careers by sponsoring workshops and helping to make connections in the professional world.

“I couldn’t imagine a job more rewarding, at least for me,” Holden says.

Holden loved mentoring others into finding what they loved to do and help get their careers started. Holden also served on the advisory board of various schools of communication.

“You know it’s time to retire when you run into a student who says ‘My mother told me all about you!'” Holden says.

Holden and his wife, Mary-Anna, now live in Madison, New Jersey, where she is the former town mayor. Being mayor gave Mary-Anna a special affection for the name Madison, and the couple decided they should visit all cities in the United States called Madison.

“When my wife first came up with the idea my initial thought was, ‘Thank God that there isn’t a Madison in Alaska or Hawaii,'” Holden says.

Out of 38 cities named Madison, Mary-Anna has visited 32.

Together, the Holdens are still very involved with mentoring students and helping others. They travel to different universities around the country to guest speak and motivate students about their upcoming careers. Holden still serves on the DJNF board, which meets once a year.

Holden’s time teaching still fills him with pride, and he says he still gets letters and emails from former students and interns telling him the impact he had on their careers.

“Any successful career begins with a great education, both practical and academic,” Holden says.

Ewa Palupska is a senior journalism major from the northwest suburbs of Chicago. Her emphasis is strategic communication with a  minor in business. She has been a part of the Delta Delta Delta sorority for the past three and a half years and served as its vice president of public relations. Palupska plans to pursue a career in public relations after graduating in May 2015.