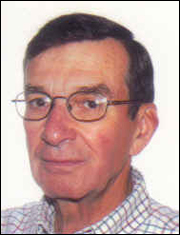 What do you do?
I have reached the stage and age where I am able to limit my practice (as the doctors say) to subjects of interest. I only work with people whom I enjoy working with. I always say I’m a reporter.

What would be your best advice to current students?
Work your tails off. Write. Rewrite. Love editors. Ask questions. Listen to people. Read. Learn history. Learn a foreign language. Take a course in public speaking, and courses in the sciences. Freelance. Join the Alumni Association and and subscribe to such lists as MizzouMafia, for professional and career networking. Alumni are usually generous in helping new grads. Oh, yes, one important bit of advice: Always say, “Thank you!”

What did you want to be as a kid?
I wanted to be a reporter. I always loved to write. One high school teacher was most inspiring. As an 18-year-old in the army, I edited the 8th Cavalry Regiment newspaper. Since then, I’ve always been a reporter.

General Douglas MacArthur’s speech to Congress on April 29, 1951, after being relieved of duty by President Harry S. Truman, ended with a refrain from an old army barracks ballad: “Old soldiers never die, they just fade away…” I did serve under MacArthur, and I hope the General, reviewing his troops on the great parade ground in the sky, will forgive me if I paraphrase this as: “Old reporters never die, they just write away…”

For that’s how I describe my life these days, long after writing 30 as a reporter actively reporting. I still like to call myself a reporter, but – as I wrote in my original profile – I limit my practice to subjects of interest.

This is one of the great advantages of a J-School education, working for decades as a reporter and editor, and now, on my own, being able to work the phones and Internet, do the research, sit at a keyboard, write, get paid for it, and have a wonderful time doing so.

Every reporter I know says he or she will write a novel one day. And I had a novel outlined for years, a historic novel based in Sweden, where I worked as a foreign correspondent. I finally wrote the novel and self-published it. Thanks to the technology wizards, the Internet makes self-published books readily available worldwide on Amazon and other sites. The book is “Jumpin’ Jimminy – A World War II Baseball Saga – American Flyboys and Japanese Submariners Battle It Out in a Swedish World Series.” You can check it out and read a few reviews at www.JumpinJimminy.com. And by the way, I put a Mizzou character in it.

I recently translated, from Swedish to English, a book written by Laszlo Szombatfalvy, a stock analyst who was mentor to a group of young business reporters with whom I worked in Stockholm. He successfully applied risk analysis to investing, and used the same technique in discussing “The Greatest Challenges of Our Time,” which is the title of his book. I do not like to do translations, but this meant working with old friends on a current, fascinating subject. (Go to www.thegreatestchallengesofourtime.com.)

And Now, for Journalists and the News-Devouring Public

Of specific interest to journalists – from those still in J-School to those who have spent years in the trade – is the book an old friend and colleague, Paul Dickson, and I are working on: “Journalese – A Dictionary for Deciphering the News.” It’s scheduled for publication in the spring of 2012, by Marion Street Press of Portland, Oregon.

Although the word “journalese” has been around since the late 1800s – one of the earliest dictionary definitions, “a style of writing held to be characteristic of newspapers,” was in the 1872 edition of Merriam-Webster – there has never been a dictionary of journalese. We will fill this void (that’s journalese, by the way – voids are always filled, never left in peace) with definitions by a wide range of contributors, most of them working journalists who know journalese and who can’t live without it. We, too, provide our own definitions. (OK, here are a few: “Romantically involved” – They’re having sex. “Some say…” – There are probably two people out there who agree with the reporter and editor. “Hulking” – Any parking garage the reporter feels should be torn down by a developer.)

Paul Dickson – who has written some 50 books, mainly about language and baseball (a classic is “The Dickson Baseball Dictionary”) – and I worked in the Washington bureau of Electronics magazine some 40 years ago, and have written several books together, including “The Volvo Guide to Halls of Fame.” In our careers, we have probably used journalese even more outlandish than that to be found in our dictionary. We point out that not all journalese and media euphemism is bad or to be avoided at all costs – or, as the journalese cliché goes, “avoided like the plague.”

The Future of Journalese?

But what about the conventional wisdom (journalese for “two guys say so”) that newspapers will go the way of the dinosaurs, to be replaced by electronic media under god-knows-how-many different guises? We believe this means there will be an even greater need for professional journalists who know how to report and write accurately, clearly and objectively – no matter what electronic carrier they use.

The more the world and the media change, the more journalese stays the same. Temperatures still soar. Costs still skyrocket. Tornadoes still cut swaths, leaving rescue workers to sift through the rubble and survivors searching for answers. Heated debates are still carried out before packed auditoriums. Campaign funds are still war chests, the cost of a project is still its price tag, and before said project can start it needs a green light.

“Journalese” will not be a “last hurrah” for our literary efforts. Writing is simply too much fun. What’s next? Well, as the classic journalese closer goes, time will tell. But we’ll be there, writing away.