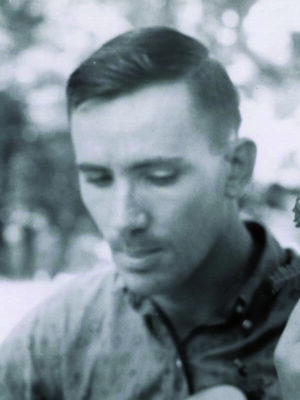 Ward Degler was born May 4, 1935, in the small town of Phillips, Wis. The country was in the depths of the Great Depression. His father, a forester from Indiana, earned about $60 per month as a superintendent for the Civilian Conservation Corps. The CCC, a public work-relief program for unemployed men, sponsored camps throughout northern Wisconsin. As the boss, Degler’s father received family housing as an employment perk. The accommodations were primitive structures near the camp area and included farmhouses, a fire-tower cabin, a walk-up apartment and a one-room log cabin. The family didn’t have running water until his dad quit the Forest Service in 1946 and bought their first home.

“The Great Depression gave me a great appreciation for quality of workmanship. I would not change my childhood experience at all. When you don’t have anything, you can think, reason, build on ideas and talk through things,” Degler said.

Degler’s first love was art and from the age of three, he drew pictures of everything. His father used to stop at a printing company to pick up misprinted paper for him to draw on. To this day, Degler has a passion for art.

“Everyone called me the ‘artist’ in second grade. It was only after I had spent a year studying art at the Kansas City Art Institute that I realized I probably couldn’t make a living as an artist and turned to journalism,” Degler said.

Degler spent two years in the Army as a combat medic in a MASH unit before entering the Missouri School of Journalism on the GI Bill of Rights. By day he covered stories for the Columbia Missourian; by night he moonlighted as a general assignment reporter at the Jefferson City News Tribune. Sometimes Degler covered a story for both papers at the same time. He earned his Bachelor of Journalism degree in three years by adding summer school to his schedule.

“I was passionate about it. I was good at it. But by the time I graduated in 1962, all I really wanted was a good night’s sleep,” Degler said.

After graduation, Degler stayed with the Jefferson City News Tribune for another year, serving as a feature editor and writing a weekly column called “Outdoors in the Ozarks.” Degler covered hunting, fishing, boating, dog training and just about anything Missourians did outdoors.

“My early years in the north woods of Wisconsin gave me a feel for the outdoors that I never lost,” Degler said.

One of the memorable assignments Degler remembers is as a member of the press corps that accompanied the U.S. Secretary of Interior on a trip down the Current River in southern Missouri. He remembers that the event concluded with a couple of dozen reporters skinny-dipping with the Secretary in the river at midnight.

“I also used my art to create a series of ‘Mid-Missouri Landmark’ stories with watercolor illustrations and short narratives of historic places. I’m told the originals of those paintings still hang in the newspaper office,” Degler said.

The News Tribune nominated him for a Pulitzer for a series of features he wrote about the state mental hospital in Fulton, Mo.

“I don’t think it got serious consideration, but it did help the hospital get a greatly revamped budget which it sorely needed,” Degler said. “I was deeply flattered to be considered.”

Degler then accepted a job with The Associated Press before accepting a commission in the Navy. Some of the next four years were spent at sea, and he was then put in charge of the White House photo lab while President John F. Kennedy sat in the Oval Office. Degler remembers getting rousted out of bed at three in the morning to approve a set of photos that first lady Jackie Kennedy had taken of young son John’s birthday party the day before. Later, he also covered President Kennedy’s funeral by positioning his team along Massachusetts Avenue and shooting pictures of the crowd.

“Kennedy’s assassination hit me like a ton of bricks. Disbelief. I was shocked beyond all human understanding,” Degler said.

Soon after, Degler was transferred to the Pacific Fleet where he joined military journalists in documenting the Vietnam War for the U.S. Department of Defense. After leaving the Navy, he continued his civilian journalism career. He returned to the AP and among a variety of assignments, covered an American Indian uprising on the Rosebud Sioux Reservation in South Dakota. Degler then entered corporate communications, writing and editing for a manufacturing company in Minneapolis. He finished his salaried career as creative director for the marketing division of The American Legion in Indianapolis.

In the early 1990s Degler started writing a weekly column for his local newspaper, the Zionsville (Ind.) Times Sentinel. The Indiana Press Association twice named his column Best in Class. A book of selected columns, “The Dark Ages of My Youth and Times More Recent,” was published in June 2011. The title comes from the realization that many of his columns describe events from his childhood. The book was the No. 1 title on Barnes and Noble’s “Rising Star” site during August 2011.

Some of Degler’s favorite newspapers include the Mexico Ledger, the Louisville Courier-Journal, The Des Moines Register and the Milwaukee Journal Sentinel. He laments the fact that stockholders’ profits are now a priority for many newspapers.

“Newspapers today aren’t the same as the ones I fell in love with. Most of my favorite papers have turned operations over to MBAs and gone public. When a paper’s primary commitment is to stockholders, it loses its soul,” Degler said.

Despite a growing dependence on the Internet and other electronic media, Degler still loves the printed word. There is intrinsic value to ink on paper, he said.

Since retiring, Degler divides his time between writing and painting. He writes for both his own enjoyment and for several charities on whose boards he serves. He enters several art shows a year.

“Here in Zionsville I have flushed out all the aspects of my career,” Degler said. “I fell in love with a local girl, got married and settled down – at least as much as any journalist ever settles down,” he added.