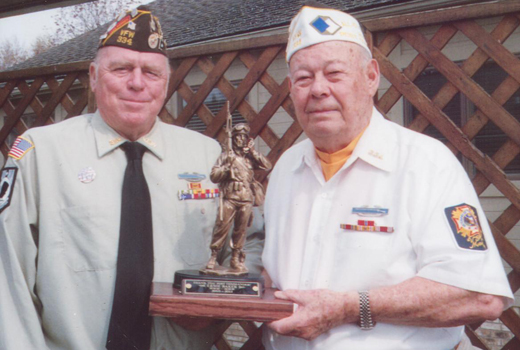 Ernest Baker, BJ ’48, (right) received a bronze statuette of a combat infantryman mounted on a base with an inscription thanking him for serving as the commander of North Oakland, Mich., VFW Post 334 for the past five years. Baker was a combat infantryman with the 96th Infantry Division in the Philippines during World War II. The new commander, James Hubbard, (left) presented the statuette to Baker following the recent election of post officers for 2012-2013. Baker’s career in the advertising industry spanned 52 years. He joined the Zimmer-Keller Agency in Detroit in September 1948 and retired from BBDO Detroit Dec. 31, 2000. Baker founded the E.W. Baker Inc. advertising agency in 1964, later acquired by Omnicom in 1989. In 2011, he was inducted into the Adcraft Club of Detroit’s Hall of Fame. Baker’s autobiography, A 50-Year Adventure in the Advertising Business, was published by Wayne State University Press in 1998.