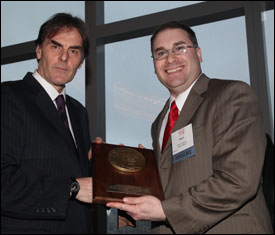 Stuart Goldman, BJ ’96, won the Jesse H. Neal Award, which has been called “the Pulitzer Prize of the business media.” Goldman, managing editor of Penton Media’s Club Industry magazine, won the award for his profile of health club owner Curt Beusman, who founded Saw Mill Club in Mount Kisco, N.Y. The article, titled “Renaissance Man,” appeared in the September 2010 issue of Club Industry. The Neal Awards, presented by American Business Media, drew 660 entries in 19 categories, which produced 43 winners. Goldman, of Kansas City, won in the Best Profile category, Class A, for magazines with up to $3 million in gross advertising/circulation revenue. He shares in the award with senior art director Jennifer Ray, responsible for the layout of the article and for coordinating Beusman’s photo shoot at Saw Mill Club. Along with a plaque presented to Goldman, each received a medallion inscribed with their names. The Neal Award is one of three prestigious honors Goldman has received in the past year. In January, Goldman won the Eddie Award presented by Folio magazine for his profile of fitness industry legend Jack LaLanne in the October 2009 issue of Club Industry. Goldman won in the B-to-B, Recreation/Sports/Outdoor, Single Article category. In August 2010, Goldman won a West Regional Gold Award from the American Society of Business Publication Editors (ASBPE) for his story on the shootings at an LA Fitness club in Pennsylvania. The winning entry came in the News Analysis/Investigative category for publications with under $2 million in gross revenue.