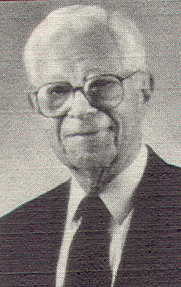 Daniel Schorr, the last of Edward R. Murrow’s legendary CBS team, began his career as a foreign correspondent during World War II, writing for The Christian Science Monitor. During the post-Stalin thaw, Schorr opened the CBS News bureau in Moscow in 1955 and became one of the first western journalists to obtain an exclusive interview with Nikita Khrushchev. He returned to the United States in 1966 and later took a full-time assignment as CBS’s chief Watergate correspondent – an assignment that earned him a place on Richard Nixon’s “enemies list.” In addition to covering government controversies, from the McCarthy hearings in the 1950’s to the Iran-contra affair in the late 1980s, he also helped create the Cable News Network in 1979. Since leaving CNN I 1985, Schorr has worked primarily with National Public Radio, where he serves as a senior news analyst and host of “Question Time” and “On NPR,” a two-hour national call-in program aired during times of national crisis. His awards include three Emmys, the Alfred I. DuPont-Columbia gold Baton, the Peabody Award and the George Polk radio commentary award, as well as several decorations from European heads of state.