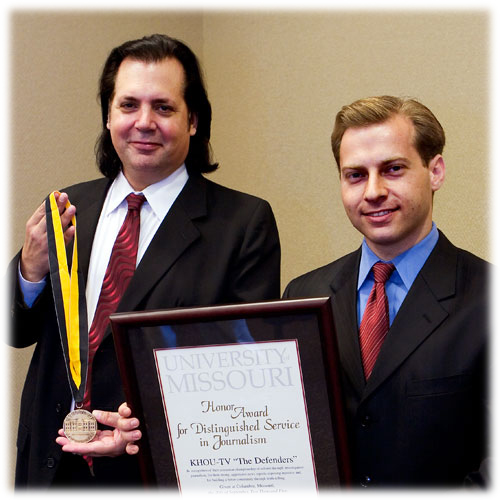 KHOU-TV’s “The Defenders” exemplifies the value of watchdog journalism in our times. As “defenders of the public interest,” this nationally honored investigative team is not afraid to question the status quo. The team’s investigation of Firestone ATX tires and rollover crashes resulted in a worldwide recall that may have saved thousands of lives. It also caused a wave of safety reforms in federal oversight and auto industry design. The Defenders unit also takes on complicated but important stories, such as exposing and clearly explaining testing errors made at the Houston Police DNA lab. Their findings freed innocent men from prison and caused a national dialogue about police forensic labs all over the country. Another story highlighted how one of the nation’s largest school districts was encouraging underperforming students, mostly minorities, to drop out as a way to enhance the district’s scores on state performance tests. The Defenders’ probing journalism “gives voice to the voiceless.”