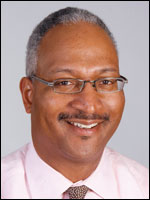 Mark Russell, BJ ’84, is the editor of the Orlando Sentinel. He joined the central Florida newsroom in 2004 and served as managing editor and print news editor before taking the top newsroom job in October 2010.

Russell serves as a director of the Florida Society of News Editors, the American Society of News Editors’ Awards Board, the Central Florida chapter of the National Association of Black Journalists and the Institute for Advanced Journalism Studies at North Carolina A&T University in Greensboro, N.C. He is president of the board of directors of the Missourian Publishing Association, which oversees the Missouri School of Journalism’s multiplatform newspaper and advises the School’s dean. Russell also has served as a juror for ASNE’s annual journalism awards and the Pulitzer Prize. He was the founding director of the Cleveland Urban Journalism Workshop, a program started in 1989 by the local NABJ chapter. Russell completed the Advanced Executive Program at the Media Management Center at Northwestern University in 2003.

Russell and his wife, Christina, who graduated from MU in 1985, have a 22-year-old son and 17-year-old daughter.