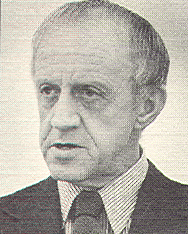 Paul Fisher, Professor Emeritus of the Missouri School of Journalism and co-sponsor of the Freedom of Information Center, began his career as a linotype machine operator. He was an apprentice of America’s foremost type designer, Frederic W. Goudy, and eventually established Press of the Crippled Turtle, a private press. In his forty years as an instructor in the School of Journalism, Fisher taught classes mainly in the fields of typography and press-government relations. His courses established freedom of information as an academic course of study. But his interest in this topic reached beyond the classroom. From 1958 to 1989, Fisher served as director of the world’s first Freedom of Information Center Under Fisher’s guidance, the Center served as both an academic library and a clearinghouse for freedom of information issues. The Center’s files, which now contain close to one million items, answer an average of 2,000 requests a year from journalists, public officials, students and private citizens. In 1996, Fisher was inducted into the American Society of Newspaper Editor’s FOI Hall of Fame.