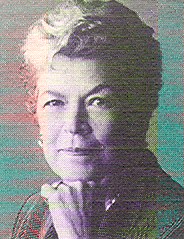 Ruth Whitney has expanded the scope of Glamour magazine to reflect the changing lifestyle of contemporary women in her 29 years as Editor-in-chief of the award-winning women’s publication. From “Women Right Now” to “tell Us What you Think,” she has introduced more than 50 columns and features in an effort to serve women more effectively. After graduating from Northwestern University, she began her journalism career as a copywriter. At 27, she was made Editor-in-chief of Better Living Magazine. She served as Executive Editor of Seventeen magazine before joining Glamour in 1968. Under her leadership, Glamour has initiated national programs that honor and promote the achievements of women. The efforts of Whitney and her staff have resulted in many awards for the publication, including 12 nominations as a finalist for the National Magazine Award and five EMMA Awards from the National Women’s Political Caucus. When Whitney came to the magazine, the circulation was 1,430,000. Today, with a circulation of 2,305,000, Glamour is the top fashion, beauty and health magazine for young women. Whitney was inducted into the American Society of Magazine for Editor’s Hall of Fame and was awarded the Matrix Award by Women in Communication.