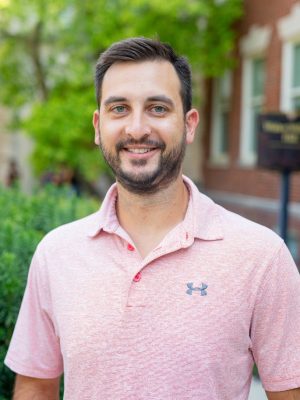 Adam Feiner is the assistant sports editor for the Columbia Missourian — the J-School’s community newspaper. He also is a visiting assistant professor on the Journalism Professions faculty.

In addition to his job at the J-School, Feiner is an assistant baseball coach for Jefferson City High School.

Previously, Feiner worked as an 8th grade writing teacher at Lewis & Clark Middle School in Jefferson City. He taught students several different writing styles — narrative, informational, argumentative and poetry — as well as grade-level grammar and spelling. He earned his Missouri teaching certificate through the American Board for Certification of Teacher Excellence.

Feiner has worked for newspapers in Missouri, Illinois and Wisconsin.

He was a freelance sports writer for the Columbia Daily Tribune and Jefferson City News Tribune during his teaching tenure at Lewis & Clark. He was the sports editor of three weeklies and a monthly newspaper in the Madison, Wisconsin, area before moving to Missouri. After graduating from Western Illinois University in December 2016, he worked as a sports reporter for Sauk Valley Media — a daily newspaper company covering several counties in northwest Illinois.

Feiner holds a bachelor’s degree from Western Illinois’ Department of Broadcasting and Journalism.