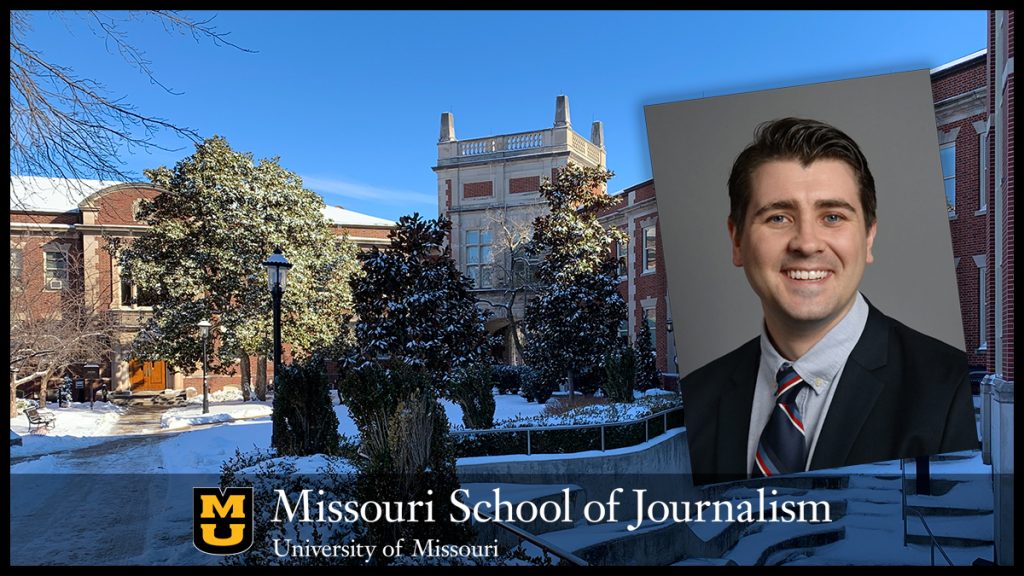 Columbia, Mo. (Feb. 24, 2022) — Ryan Thomas’ research at the Missouri School of Journalism revolves around how the industry deals with changes, from economic pressures to the constant adaptations required in the digital era. And there is no one more suited to study change than Thomas, who has seen his fair share of change in his own life.

Born in Wales, Thomas grew up in a media environment with key differences from journalism in the U.S. Historically, many American news publications strive for objectivity; whether achievable or not, attempting to avoid partisanship and overt bias affords respectability to news outlets. But in the U.K., newspapers have long been known to proudly display their slants — political and otherwise.

While the constitutional protections afforded to American journalists make it exceptionally difficult to prosecute cases of invasion of privacy or libel (the case of Jerry Falwell being a notable example), U.K. journalists have been regularly held to account in a number of high-profile cases, such as a headline-grabbing phone-hacking scandal in 2011.

In fact, this very subject — media ethics in democracy — is one that Thomas teaches at the School of Journalism, but when he came to the U.S. in the early 2000’s, his attention was focused on a different kind of media: music journalism.

“I was a voracious consumer of music and music journalism,” said Thomas, who earned his master’s degree in communication from Washington State University in 2008 — the same year the bottom fell out of the economy, leading him to change gears toward an academic career in journalism. “It turned out that the easiest way to stay in America during that time was as a doctoral student, and I came to really like journalism research.”

One doctorate later, he arrived at Mizzou in 2012, where he now serves as an associate professor of journalism studies. He is also the Wallace Turner Memorial Faculty Fellow, an endowed fellowship from the Donald W. Reynolds Foundation.

Now, hard at work on a study that will be presented as an abstract at this year’s International Communication Association conference in Paris, France, Thomas has turned his attention to another aspect of change: the predictions people make about journalism’s future.

“I don’t see a future in the model of the 20th Century, but nonprofit news organizations are on the rise. There’s growing interest in public subsidies for journalism, which is no big deal in Europe but would be a big shift in America.”

“There is constant talk about the future of journalism,” Thomas said. “Some people are very optimistic, others are pessimistic, and some are only optimistic about one platform, like digital news. Everyone has a different prediction, and not all of them can come true.”

Examining a set of predictions collected from journalists and media professionals over the course of 12 years, Thomas and associate professor Brett Johnson — along with Tim Vos, director of Michigan State University’s School of Journalism, and Mizzou doctoral students Elizabeth Bent and Arthur Bremer — want to know what it all means. Which predictions hold weight, and which simply represent people trying to wish their preferred version of the future into existence? The answers, Thomas hopes, could help clarify the path forward for the industry.

“I’m always looking at the relationship between a person’s vision of journalism — why they got into the field in the first place — and the work that they have to do on a day-to-day basis as a result of changes in the industry,” Thomas said. “The gap between the vision and the work is where you see the real impacts of change, and studying these predictions might open the door to see into what that gap might look like in the future.”

After all, it’s not the changes themselves that matter most to Thomas; it’s the people and organizations who react and adapt, constantly remaking the media landscape. Which means his work isn’t really about the future, but about the visions and decisions taking root in the here and now.

“The Times is still a news organization, but it’s really transforming into a full-service media organization,” Thomas said. “They have a really great recipe section. Now they have Wordle. They have puzzles and games. What we’re starting to see is that there isn’t much of a middle in the media environment; lots of small, local media are struggling, and then you have this massive growth at the top.”

“There are very good, very thoughtful criticisms of ‘objectivity’: that it has a status quo bias, or that it fails to represent marginalized groups,” he said. “Those are worthy criticisms, and we’re certainly seeing more partisan media emerge. But I’m of the mindset that objectivity is far more difficult to displace than a lot of these critics seem to think, because objectivity is such a big part of how so many journalists see their roles.”

But regardless of where change ultimately leads the industry, Thomas has confidence in one specific type of change: innovation.

“I don’t see a future in the model of the 20th Century,” he said. “But nonprofit news organizations are on the rise. There’s growing interest in public subsidies for journalism, which is no big deal in Europe but would be a big shift in America. And we are seeing more local initiatives emerge to support local journalism, like New Jersey’s Civic Info Consortium. The fact that we’re seeing more openness to ideas and alternative models is a good sign.”