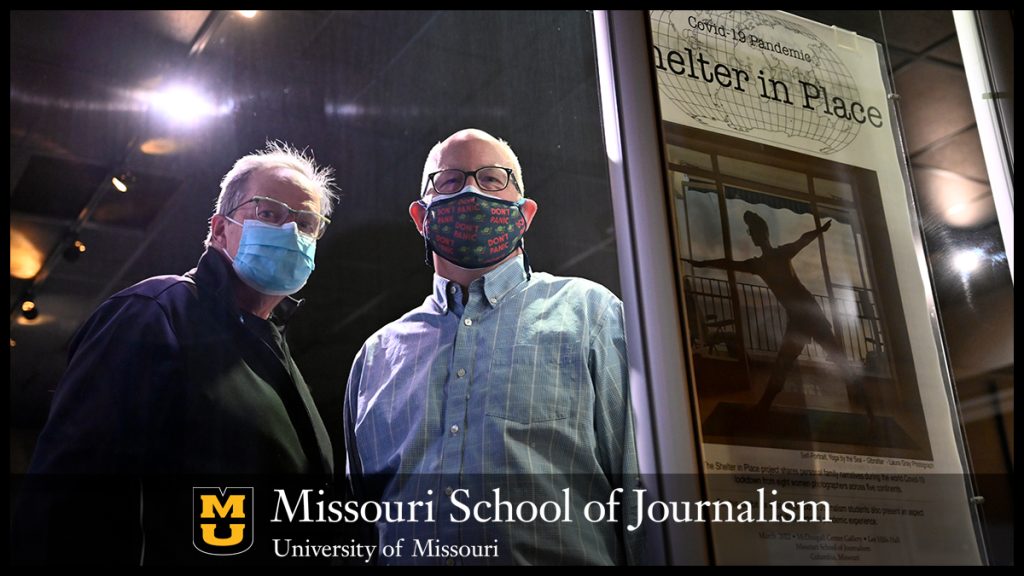 Columbia, Mo. (March 23, 2022) — Shelter in Place, the new photo exhibit now on public display at the McDougall Center for Photojournalism Studies at the Missouri School of Journalism, is a departure in a number of ways. Rather than focusing on the work of a single photographer, as is usually the case for exhibits at the center, Shelter in Place presents the work of eight different women in six countries — some from professional photographers, but mostly the work of amateurs capturing their daily lives in the midst of a pandemic.

And then there is the work of seven School of Journalism students, occupying a small but noteworthy space between the sometimes heartwarming, sometimes heart wrenching photographs of family life and personal struggles. Like the image of a lone ladybug by 2021 graduate Hilary Tan, the student images stand apart, undeniably distinct in their focus on metaphors and haunted isolation — and yet it’s hard to imagine the exhibit without them.

“This project was all about inclusion, so I was pleased to see the student work included,” said Barbara Dunlap, the project’s creator and editor, who earned her master’s degree from the School of Journalism in 1989 before embarking on a career as an editor.

Indeed, while the collection is organized around a single principle — life during the “shelter-in-place” stage of the COVID-19 pandemic — Dunlap has taken care not to squeeze them together into a single narrative. Each image tells its own story, both in pictures and with supplemental text from the artists; of living with breast cancer at a time when health systems are taxed, or of the privilege of experiencing the pandemic as an opportunity to spend more time with family.

“You can see a focus on pets, cooking, a lot of kids,” said Keith Greenwood, co-director of the McDougall Center and an associate professor of photojournalism and media history at the School of Journalism. “You can see how we are more attentive to the people around us when locked in place.”

Professor emeritus David Rees, co-director of the center and the exhibit’s designer, sees raw power in the collection of relatively unsophisticated images. Of Laura Gray’s image of herself in Gibraltar as she contemplated how to move forward with breast cancer treatment:

“I have a strong emotional response to that picture,” Rees said. “It’s a pretty straightforward self-portrait, but one that has a lot of power.”

“You know, it’s this idea of trying to understand who we are in the universe.”

The student photographs seem less varied but more intense, more concerned with layers of meaning than with creating a realistic record of daily reality. Unlike the original set of photos, which were submitted by all eight women with the knowledge that they were taking part in a project, the student work came from images that had been previously published in the Columbia Missourian.

Rees and Greenwood suspect that for the students, these images served a purpose that went beyond illustrating a news story.

“I think many photographers did start their own personal projects during the shelter-in-place orders to help define the experiences they were having,” Rees said.

“The student pictures all seem to have that isolation component to them, even down to a single ladybug,” Greenwood added. “They may have felt very cut off during that time.”

But for all the isolated imagery, the exhibit itself is in good company. Aside from displaying the images, Greenwood and Rees are also adding the project to the Missouri Photojournalism Archive, which preserves photos for archival, research, and educational purposes. For Dunlap, that means the international perspective of her project, presenting ordinary life in six countries at a tumultuous moment in time, will continue to serve a purpose even after the world has move on from COVID-19.

“Working with women from all these different countries opened my eyes to situations that I wouldn’t have known existed,” Dunlap said. “If you were a tourist going through Namibia or Romania, you wouldn’t see what these women were describing. I’m so pleased that the McDougall Center will keep this project alive in perpetuity so people can continue to have their perspectives widened.”

For now, however, archiving is a moot point; the project is currently open 9 a.m. – 4 p.m. on weekdays for all to see in the center’s gallery on the bottom floor of Lee Hills Hall, where it will remain free and open to the public until April 8. From an old man in Japan tending to his garden to a ghostly figure staring forlornly out an upstairs window in Missouri, Shelter in Place does not try to capture The Big Picture of a story that will always be larger than a single image or narrative. Instead, one should come to the exhibit expecting a series of snapshots in time. Chapters, each from a different book.