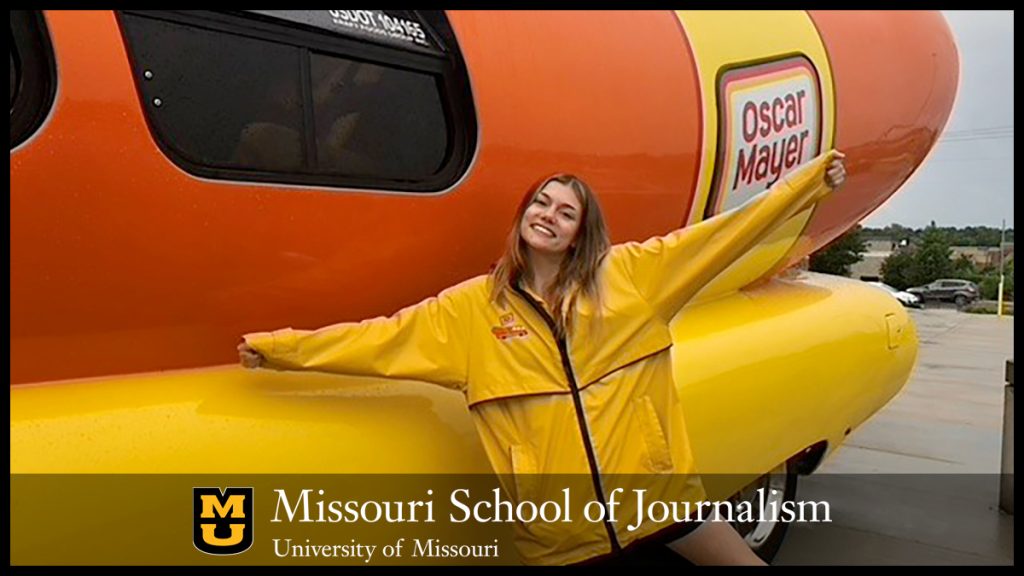 For most people, the idea of driving a giant hot dog-shaped car around for a year doesn’t sound like a real job. But for Missouri School of Journalism students, it’s a viable career opportunity. Every year the Oscar Mayer Wienermobile recruits at the University of Missouri, hoping to find its next class of Hotdoggers.

Ally Friend, BJ ’21, is one of 12 recent college graduates from around the nation working as a spokesperson for Oscar Mayer. She and her Hotdogger partner, Brandon Mazzaferro, a University of Alabama graduate, came to campus on Feb. 14-17 to show off the Wienermobile and lead an informational session on what it takes to be an Oscar Mayer Hotdogger.

“It’s a little surreal being back, because I am treating it like it might be my last time on campus,” Friend said. “I am trying to take it all in and do all of my favorite things that made my time at Mizzou so special.”

Friend, who goes by ‘At the Grill Ally,’ attended last year’s information session before beginning the lengthy interview process. She landed the job in April 2021 and started in early June. All of the Hotdoggers received two weeks of training at what they call Hotdog High.

“They go over everything from media relations to how to drive the Wienermobile,” Friend said. “It was still a little nerve-wracking to get on the road, but after a few weeks you get into the swing of things. It also helps to have an amazing partner who you do everything with.”

Since she started the job, Friend has traveled to 17 states in seven months. Anytime she travels to a new city, her job entails setting up events, reaching out to media and booking hotels. There are a lot of constantly moving pieces, which is why they call the Wienermobile a PR firm on wheels.

“MOJO was the first time that I felt like everyone was really integrated as a team and cared a lot about each other’s success, regardless of our differences.”

“One of my favorite parts of the job is working with local nonprofits in whatever city we are in,” Friend said. ”When we were in Knoxville, Tennessee, for Halloween, we volunteered with Meals on Wheels and delivered flowers to nursing homes using the Wienermobile. It meant a lot to me that we were able to do that.”

Friend attributes her experience as a media planner with the School’s student-run professional advertising agency MOJO Ad for her confidence to perform this role. While she was in her capstone, she was one of four chosen speakers to represent her team for the State of the YAYA report. The annual report provides insights into the Youth and Young Adult market.

“MOJO was the first time that I felt like everyone was really integrated as a team and cared a lot about each other’s success, regardless of our differences,” Friend said. “Those interpersonal skills have definitely translated to now when I am working with the other Hotdoggers.”

While she’s been traveling, Friend has been able to connect with other former Mizzou grads who were also Oscar Mayer Hotdoggers.

“Anytime we’ve been in the area of a former Hotdogger, they’ve done things like invite us over to their home and cook us a homemade meal,” Friend said. “But if they’re also Mizzou alumni, they care even more substantially, and that’s really special.”

Because the job is only a year long, Friend is looking forward to her future and hopefully welcoming a new Mizzou Hotdogger into the fold.

“This is the craziest, best job,” Friend said. “I don’t know exactly what is next for me yet. But I can’t wait to see who takes over from me and continues the over 10-year long Mizzou legacy.”