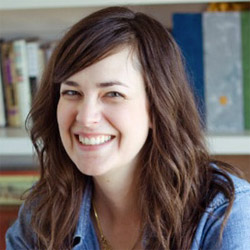 About to graduate from the Missouri School of Journalism with a magazine journalism emphasis, Ann Friedman, BJ ’04, faced a fork in the road, unsure of which path to take.

It was the early 2000s, and digital technologies were in their pioneer days. Not enough was known about these new tools to understand how journalism could embrace them. Courses on the subject weren’t offered in schools, Missouri included. Friedman found during her job search that most entry-level positions involved some type of digital work and saw two choices for herself. She could resist the Internet and struggle in her early years doing mediocre digital work. Or, she could use the Missouri Method of hands-on learning: Learn about digital by using it. Friedman chose to dive headfirst in to the unknown world of digital.

Little did Friedman know her decision to go digital would lead her to the freelance career she has today. Most of Friedman’s work is published in the digital realm for online publications, although she has written pieces that have been featured in magazines such as Elle, Rolling Stone and Newsweek. Despite a journey that has been filled with twists and turns, Friedman believes freelancing is where she’s meant to be.

After graduation, Friedman moved to New York. She spent the next few years at a series of internships and jobs on both coasts before settling in to an assistant Web editor position at The American Prospect in Washington, D.C. She spent several years working at the bimonthly print and digital political magazine, one that focuses on policy issues related to equality, social justice and the economy.

Friedman integrated new digital platforms into her work as they were introduced. Twitter was similar to the headlines she wrote for the Columbia Missourian, she found. Tumblr, a site that allows users to share multimedia content in blog form, created a world of animated GIFs. She was intrigued by their ability to string together multiple image files to essentially create a movie with no sound. The process was one journalists hadn’t caught onto yet.

In 2008, Friedman was named deputy editor of The American Prospect, where she assigned and edited feature stories. It was her first taste of having a job that gave her control over content, and she soon longed for an editor-in-chief position. As an under 30-year-old female, Friedman knew luck would need to be on her side.

In March 2011, Friedman landed her dream job as executive editor of GOOD. Based in Los Angeles, the five-year-old Web and national quarterly print magazine was dedicated to bettering the world while also appealing to a younger demographic.

Friedman spent her first few months at GOOD creating her team of journalists and designers. She found many journalists she wanted were unwilling or unable to move to the West Coast from the East Coast. She decided to take a different approach. Friedman began targeting those people with more freedom to move, those with no significant others or children. Eventually she hired the eight people she felt were perfect to join her team. They blended the best of old media values with an appetite for all things new.

Friedman began the process of overseeing and editing her first few issues of the magazine. However, as the months went on, she began sensing something was amiss. She sat in on a series of vague PowerPoint presentations where the owners discussed changing the company’s direction. In retrospect, Friedman believes the owners had lost interest in the magazine, prompting these discussions.

One final and cohesive PowerPoint presentation from the owners brought sudden clarity to the situation for Friedman. A new directional change would take the magazine from one focused on solutions-oriented journalism and the social good to more of a community-driven content type of social media platform. The idea was similar to Reddit, where users could submit and vote on content to determine its prominence on the website.

What Friedman didn’t yet know was that the owners felt she and seven of her team members didn’t possess the necessary skill set to launch GOOD in this new direction. It was during a party celebrating GOOD’s latest issue that Friedman and her co-workers stumbled upon the owner’s plan to fire them the next morning. These strategic layoffs left the eight unemployed in early June 2012.

Making Lemonade Out of Lemons

After the layoffs, Friedman and her co-workers decided to turn the negative event into something positive. One night, over Chinese food, the eight discussed doing one last magazine together: their own. They created Tomorrow, a single-issue print magazine featuring the latest in culture and politics.

Friedman and her co-workers took advantage of the existing news coverage surrounding GOOD after the sudden layoffs as well as the outpouring of goodwill from other journalists and readers. To secure the money needed to fund Tomorrow, they tapped in to the connections they all had with the company Kickstarter, a crowdfunding platform that helps startups raise funds from other individuals. Their Kickstarter campaign launched in late June and the group of eight met their initial goal within the first five hours and eventually raised three times their goal amount. The final 112-page glossy magazine was released in October.

After paying all of the expenses associated with creating, writing, illustrating and printing the magazine, each of the founders received $1,000 in compensation, a nominal amount compared to all of the time and effort they put into the magazine. Eventually, everyone landed great full-time jobs. In 2013, Tomorrow was nominated for an Utne Media Award for general excellence, recognition that Friedman and her colleagues relished.

“It was validation that even though this was a one-off project, that could have been considered a vanity project, it was actually something of professional quality,” Friedman says. “It was great to see another professional organization recognizing Tomorrow.”

While Friedman’s first editor-in-chief job at GOOD ended in disappointment, it ultimately pushed her to a career path that gave her the true control over her work life that she was seeking. To support herself during her temporary unemployment, she began writing a weekly column for New York Magazine‘s The Cut. The Columbia Journalism Review also offered Friedman an ongoing assignment writing a biweekly column, where she dispenses animated advice to other journalists, accompanied by GIFs, based on her RealTalk From Your Editor blog.

It wasn’t until Friedman landed these and other regular columns that she realized she could earn a living and survive being a freelancer. It was an idea she had toyed with earlier in her career while at The American Prospect. At the encouragement of a co-worker there, Friedman had submitted a hand-drawn pie chart to The Hairpin, a general-interest women’s blog that publishes original content in a variety of media forms. Friedman’s work with The Hairpin was published, but before she could pursue regular contributions to the blog, the job with GOOD appeared. Now post-GOOD, Friedman began contributing her hand-drawn pie charts to The Hairpin on a more regular basis. Friedman’s pie charts, or visual personal essays as she calls them, tackle issues like gender attitudes, politics and culture. The pie charts had started out simply as something fun for Friedman to do, so she was delighted when she became a regular contributor to the blog.

These days Friedman considers herself a full-fledged freelancer. True to her early decision to learn digital journalism, much of what Friedman does as a freelancer has a digital bent.

She spends her time coming up with her own original ideas, not just resorting to her opinion or a random Internet search, all from her quaint bungalow in sunny Los Angeles. Friedman pulls many of her story ideas from the news or her conversations with friends. She also draws on her feminist background and her years writing for the group blog Feministing.com as well as her political beliefs and her life experience. More often than not when she is on a quest for fresh ideas, Friedman picks up the phone – a tip she learned during her time working for the Missourian.

Launching a freelance career was surprisingly easy for Friedman, in part because of the contacts and relationships she had developed while working for others.

“It didn’t feel like work to get these editors to know who I was. It was people I already knew professionally,” Friedman says. “I know how editors think. I know what a good pitch is because I received so many bad ones. And I can write really fast because I’m used to restructuring other writer’s work. There is a lot about my skill set that was shaped by editing that is remarkably handy as a writer.”

On top of her weekly and biweekly gigs, Friedman usually has three to four other pieces she’s working on that are in the various stages of pitching, reporting, writing and editing. Some of her favorite pieces include “When Rape Goes Viral,” which was featured in Newsweek; “Spin the Globe: Ann Friedman in Osaka,” a piece featured in Afar, the experiential travel guide; and “All LinkedIn with Nowhere to Go,” an article in The Baffler.

In addition to her regular freelance work, Friedman tries to influence her field in a positive way. She created LadyJournos!, a Tumblr site highlighting the work of women journalists, in order to close the byline gender gap by promoting the hiring of women writers. She also speaks at conferences around the country about journalism and design, including a talk she gave at in March 2014 at the University of Missouri Women’s Leadership Conference that explored how more collaborative attitudes can be of career benefit.

The experience Friedman gained early on by embracing the digital side of journalism paved the way for her current work as a freelancer. If there’s a life lesson to be learned from Friedman’s career, it is this: With risk comes reward, with adversity comes strength and the journey is more important that the destination.

Elizabeth Gower, from the Kansas City area, is a senior studying strategic communication and business at the University of Missouri. She has worked as a media outreach intern for Renew Missouri, a non-profit in Columbia, and now serves as the organization’s development associate. Post graduation, Gower plans to stay in the mid-Missouri area.