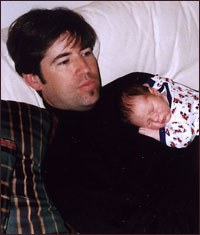 How did you get started in your career?
I went to school at Mizzou and wanted to get into the news-editorial sequence. My adviser, Jim Albright, steered me into the advertising sequence. He saw my writing style and thought it would be better suited to the advertising industry. I am really indebted to him for figuring that out for me. I graduated and got a job as a copywriter in Houston, Texas, at Ogilvy & Mather, which is a really great place to start your career. It’s a big agency and has a lot of opportunity. At the time, they were really great at training. They would take somebody pretty raw and teach him or her how to be a good copywriter. I was there five years. I worked on Shell Oil, Compaq Computers and the Houston Symphony, as well as some of the smaller accounts they had. I was really lucky to get in there. I sent my book down, and they had a copywriter leave the same week my book arrived. It was a big break for me that I was able to get an interview there and get hired. It’s all timing; if I sent my book there a month earlier or a month later, I would have gotten a “Sorry, we just don’t have any openings.”

How did you discover you had a creative talent for advertising?
I basically grew up in front of the TV. And I was always fascinated by the commercials more than anything else. Especially commercials where butter talked. I had a talent for writing from a very early age. My teachers would always tell me I needed to pursue it. It was just a natural thing to get into writing and then advertising. A lot of people go through life and never get to do what they really want to do. I am lucky that I can.

What do you do in your job as chief creative officer?
I am responsible for the creative direction of Ogilvy’s LA office. One of my regrets is that I don’t get to write as much advertising as I used to. I am mostly managing people and teaching them how to write ads and how to come up with ideas and mold those ideas. I am more of a manager and instructor than a physical writer like I used to be.

What is the most challenging aspect of your job?
Juggling and time management. There is so much going on, and you have to be on top of every nuance and detail the client throws at you. Being a good time manager is really important. It’s also challenging to help people make their work better without actually doing it for them. It’s the natural tendency just to do their work for them. But it’s going to be better if you teach them how to be better and not just do it for them.

What types of campaigns do you like to work on the most?
I never really saw anything as a bad assignment. I’ve always been pretty proud the way I can take the worst assignment and really turn it into something interesting. Even the small assignments get a lot of attention and a lot of effort behind them. You are not allowed to do a poor job of something. If it’s a small, insignificant assignment, you have to make it great.

What types of products are the easiest/hardest to create advertising campaigns for?
The easiest products to create campaigns for are those that have a clear point of difference or a clear point of superiority. It’s often the hardest to do a campaign for a parity product that has nothing different about it. It’s up to you to figure out what you are going to say different about it.

What do you think it takes to produce successful advertising today? How do you know that a campaign will be successful?
You have to do something different and unusual that has an element that you’ve never seen before. This is getting harder and harder to do. The old model was you could do something, and it really wouldn’t have to be that good, but everybody would see it. That model is dead right now because it’s too easy to avoid advertising. We think the mark of a good campaign is a campaign that will get buzz and PR written about it. At Ogilvy, they have this phrase, “Don’t make your ads like a ship that passes in the night.” We want to make sure everything we do has this ability to create buzz and get everybody talking about it.

What do you like the most about the advertising business?
What I like best about the advertising business is that no two days are ever the same. I think it would be very boring if you had a job where every day was a copy of the day before. It can be stressful, but at least there is variety to it. You also have a lot of opportunities to travel or work with famous people. You get a lot of opportunities to interact with people you normally wouldn’t have the chance to meet.

What do you like the least about the advertising business?
I think one of hardest things you have to deal with, as a creative, is being creative on a timetable. The way ideas are, sometimes you’ll have an idea really quickly, and sometimes it won’t come as quickly. But the rest of the business world is on a timetable, so you are often in the position of “think of a great idea and have it on Thursday.” So there’s a lot of pressure to be creative and come up with a good idea. It can be stressful for a lot of people. As you get into your career, it becomes easier because you learn little tricks about how to generate ideas. One of them is working in public. It almost feels like you are on display and have an audience…it’s a psychological thing. Another thing I like to do is if I get stuck, I’ll walk away from it and do something completely different. I’ve found that when I do that somehow my brain is still working on it, and suddenly an idea will pop into my head.

Where do you get most of your ideas?
I wrote a radio spot in the shower one morning in five minutes that won a ton of awards. Everybody says that’s an advertising myth, but it actually happened to me. I think the office is the worst place to come up with ideas because there are so many distractions. I get interrupted so much that I physically have to leave. I’ve worked with a lot of people who believe in the Starbucks plan. They’ll go to Starbucks and sit there and work all day. If I were going to build an ad agency, I’d make it look like a Starbucks. They have comfy chairs, and it’s quiet, and people are always walking in so there’s a little bit of variety. And they have caffeine there. Get out of the office because you are going to get distracted too much.

What would be your best advice to current advertising students?
A good lesson is never stop at your first idea. The tendency is to come up with a good idea and stop there. But where the really great, breakthrough ideas come from is when you take that idea and keep pushing it in other directions. The way the advertising business is going is in very nontraditional ways. Start looking at the world a little bit differently. An ad doesn’t have to be what it used to be. The whole industry is changing. The Web and interactive are huge components. It is beyond banner ads now. You have to give consumers the ability to create content for you. You see consumers making little movies about products and posting them on sites. Advertising people need to be aware that the business is changing, and it is not about 30-second TV spots or spread ads in magazines anymore. How do you get your message across in a world where the consumer is really smart at avoiding advertising? There is a lot of room for smart people in advertising to determine this.

What are three ways you would describe yourself?
Curious. Tall. Healthy skepticism.