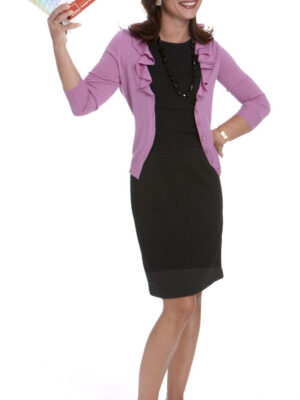 The “easy button.” That’s how Courtney Murphy describes finding balance in her life. For a woman who has traveled around the world to pursue an award-winning career in revamping and redesigning magazines, she has to push this metaphorical button every now and then. Living closer to work, choosing her projects wisely, and making time to do things she enjoys, such as cooking and biking, all aid Murphy in her perpetual goal of balance. Because behind leopard-print glasses lies a woman with an incredible passion for design – one who won’t easily leave her desk adorned with Diet Coke and pink Sharpies to head home for the night.

Now design director for Good Housekeeping, Murphy’s career has a nomadic past. From Budapest to Virginia, Scotland to Washington D.C., and now New York, Murphy has traveled wherever design has led her. But this impressive career has humble beginnings.

At a time when most other kids were busy eating unrefined sugars and watching cartoons, she was already thinking and acting like a journalist. When a close family friend entered the hospital, 7-year-old Murphy cut and pasted a newspaper together. This early eagerness to reach out and tell stories to people in an artistic way led her to a career in journalism.

A self-described “little sponge” who was largely influenced by her strong mother, Murphy sought opportunities in high school and college to use her creative gifts. In high school, she was an editor for the school newspaper and designed posters for every play and musical she could get her hands on. As an undergraduate at Colorado College where no formal journalism program was yet available, Murphy studied English and art, worked on the yearbook and reported, edited and designed for the newspaper. While editor in chief, she redesigned the paper.

“I was somehow navigating and being pulled into this sort of visual presentation of information that I wasn’t really aware I was doing. I was always trying to take it to the next level and make it something you had to read,” says Murphy.

Unaware that her eye for layout and design could be a potential career, Murphy continued her education at the Missouri School of Journalism as a master’s student in magazine journalism. Nearing the completion of her graduate project, she was given an opportunity that shaped the rest of her life. In the process of creating an insert for the School’s Pictures of the Year competition, Murphy used computer equipment and scanners from Kodak, equipment that had just been introduced to the School.

“I had nobody to turn to; nobody knew how to use any of this. They gave me 45 minutes of instruction and everything I taught myself at 3 o’clock in the morning with tears running down my face and a book in front of me. I wound up learning everything in a very accelerated way, and it served me well because I had never worked in design,” says Murphy.

Murphy’s time spent in photo and design changed her outlook on her career. One eureka moment and six extra months in school later, Murphy graduated.

And so it seemed, design was the place where she belonged. Murphy’s quirky, fashionista style and memorable eagerness for creative projects lend her co-workers to feel the same.

“Courtney is so full of life, and her energy really made Good Housekeeping a great place to work. She is very passionate; it’s never a mystery what she likes and dislikes,” says Lisa Hart, a former employee of Murphy’s at Good Housekeeping.

“She always gets her work done but is never too busy to make sure everybody else is doing ok.”

Fresh out of school, Murphy was hungry for new opportunities in design. One of her Missouri professors, Birgit Wassmuth, recommended Murphy for a design job in Budapest, Hungary. The faith Wassmuth had in Murphy’s ability to perform well at this job, Murphy explains, opened doors.

“I believed her. I don’t know why. She instilled a lot of confidence in me, and it was the pivotal decision in my life,” says Murphy.

Eager for Western influence, Budapest Week hired Murphy to redesign it. Though intimidated by the size of the project and adjusting to life in the post-Soviet era, Murphy found comfort in her passion for design. Her desire to treat every project as an equally important challenge helped her to produce a final product worthy of the Society for News Design’s “20 Best Designed Newspapers” award.

“Sometimes I’m like a little dog with a chew toy. I won’t let go. I am a bit of a perfectionist, but I try to take into account that not everybody sees the nuances of type or photography or color like I do. I try and teach people the way I see so that they can absorb the aesthetic. A magazine is never an individual effort. It takes vision, coaching – sprinkled with a little cheerleading – and teamwork to produce,” says Murphy.

“I remember the first cover shoot we worked on together. Courtney put her trust in me and allowed me to produce the cover shoot. It was with real people who are always hard to shoot. In order to get them in the mood, we had to be really energetic to get a good picture out of them. We ended up dancing on set just to get our ‘models’ to feel comfortable in front of the camera,” says Lee.

Courtney’s itch for creative projects soon led her back to the United States. While visiting family for the holidays in 1994, Murphy interviewed for a highly coveted job with the Virginian Pilot newspaper in Hampton Roads, Va. After interviewing and taking a copyediting test, she was sent straight to the hot seat in front of a squad of editors and designers with only pizza on her side.

“It was one of the more humbling experiences of my life. It’s difficult to be surrounded by very talented people, trying to answer their questions and shove pizza in your mouth at the same time,” says Murphy.

She won the job. Murphy worked as the projects editor for four years, until she yet again decided to take her talent abroad. After first serving as a consultant for Scotland’s Spectrum Magazine, she went on be a part of Independent on Sunday, one of London’s national newspapers. There, she helped the publication win one of the most prestigious awards available, the Society for News Design’s “World’s Best Designed.”

So how does an American, who originally had no idea design was even a career, end up with such high accolades for a British publication? Murphy has not only the creative talent, but also the drive to succeed and the adaptability of a great journalist.

“I always make sure what I’m doing doesn’t interfere with the written word. Instead, what I should always be doing is enhancing it. It’s the difference between decorating a page and illuminating it. You have to invest yourself in discovering the best way to communicate to your reader.”

Murphy’s accolades aided her when she decided to return to the states in 2002. Her path led her to be design director for AARP magazine for four years. Now design director for Good Housekeeping, Murphy stays busy by tackling new projects that come her way.

Regrets? Murphy doesn’t have many but has realized through her experiences that finding a balance and understanding the needs of others is a necessity.

“I was so dedicated to my work in Budapest that I missed out on some of the fun. I wish I could have relaxed a little, but I was in my early 20s, both wise and stupid for my years.”

Now Murphy makes time for herself. She enjoys reading novels, horseback riding and her Sunday ritual of listening to NPR while cooking fabulous meals for close friends. That is, if her co-workers can drag her away from her desk for the weekend.

What is the number one thing to look for in a potential career?
I would say do what you love. I love what I do, and I always work for magazines I’m proud to read. If I read it and believe in it, I will work for them. It makes a big difference because if you believe in it, it just all falls into place. You’re passionate, you’re happy and you want to make it better.

Do you think print media will eventually become extinct?
I realize that [print] is no longer king, but I don’t think it has been dethroned. I’m still a diehard fan of print. I know a lot of younger people get their information via the Internet, so I do understand the sort of dinosaur mentality of the dying breed of newspapers. But I think things are going to mutate with time – like with the advent of television we thought radio was going to fade away, but radio still has its place. I think print, too, will always have its place; we’re just going to have to be smarter about it.

As journalists, how should we adapt to new technology?
Journalists have had to start thinking about how to package information in a more Dewey-decimal search term sort of way. If you write a headline or a cover line for a magazine, you can be a little bit more playful and less direct whereas with the Internet, you have to be extremely direct and very deliberate in the words you choose.

What has the Missouri Journalism School done for you?
The J-School was probably the thing that made me into who I am today in the sense that I remember things I was taught there on a regular basis. It gave me the tools with which to ask the right questions and helped fuel a passion I didn’t know what to do with. It’s a proud place you can say you went to school; it has really opened doors for me. You have to have the talent to back you up, but people really appreciate and know the School.