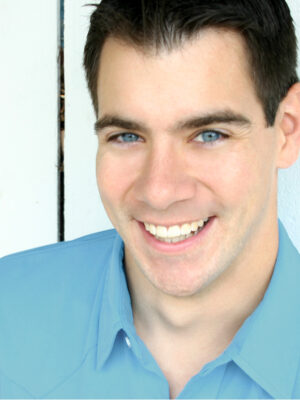 What have you done in your career?
I’ve written on a wide variety of television comedies, including “Malcolm in the Middle,” Nickelodeon’s “Supah Ninjas,” and “Family Guy.”  I also wrote a non-fiction book called “Dog Days” about my first job out of college – driving the Oscar Mayer Wienermobile.  The book makes for a great birthday, wedding, or anniversary gift.

How did you get started in your career?
I started out right out of college with an internship at “Malcolm in the Middle.” Later a position opened above me, and I was hired. I was just at the right place at the right time. Interning was a great way to get my foot in the door. Had I not interned, I’d probably still be sending out resumes. I wrote an episode called “Stevie in the Hospital,” and had a small cameo in the end: I’m the man in hospital bed number two. After “Malcolm” ended, I bounced around TV shows before landing at “Family Guy.” I was there for two years and wrote an episode that will air. Then I was lucky enough to land a staff-writing job on “Supah Ninjas.”

Is there another method, other than an internship, that aspiring writers use to get their foot in the door?
The tough thing about becoming a writer is that there’s no one way to break into the business. Each of the “Malcolm” writers started a different way. One was a stand-up comedian, one a former assistant, and one shot a funny short film that got him noticed. Ultimately, everyone has to find their own path.

Did you write any comedy pieces while in college?
I wrote a few Homecoming and Greek Week skits, but I never made it to the finals. I think it’s that rejection which motivates me now.

What do you think is the one characteristic or trait that the most successful people in your area have?
Communication is really important. It’s not all about having funny ideas. It’s about how you can express your ideas and sell them to other writers while getting the story points across.

How did your journalism background prepare you to write comedy?
Journalism not only improved my writing style but also made me a much more disciplined writer. I learned the fine art of meeting a tight deadline. Journalism also taught me how to communicate with a wide variety of people – a skill I use every day.

What do you enjoy about comedy writing?
I enjoy being around creative people all day. All of the writers are down-to-earth, approachable and the funniest people I’ve ever met. It’s a lot of fun to come to work everyday.

Are the comedy writers funny in all aspects of their life?
I’ve met a lot of comedy writers who aren’t funny at all. But most have a genuine gift for making people laugh. One thing I’ve learned is that to be a successful comedy writer, you also have to be a great storyteller. Jokes are only part of the game.

What were your hours like as a comedy writer?
I usually come in around 10 and leave at 6. But the hours are anything but predictable, it all depends on the demands of production. The potential for long hours is always looming in a business driven by deadlines.

What has been your toughest professional challenge?
Breaking into the industry is tough, and it’s tough to get your foot in the door. I was very lucky to have an internship, but it’s difficult build a reputation and a portfolio.

What is your favorite J-School memory?
I remember in 1998 or ’99 when a tornado came through Columbia, and I was scheduled to work at KOMU. It was the first time I experienced an adrenaline rush from working in journalism. It was also an exciting opportunity to put together an important story that people would be tuning in to watch. It was the first time I actually felt a part of the news process.