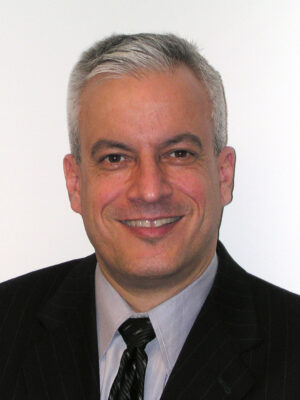 Gary Belis, BJ ’77, proudly showcases a letter from Donald Trump on his kitchen wall. After he wrote a review of Trump’s first book in 1988 for Fortune magazine, describing Trump as “the finest example we have of materialism, ambition, and self-love among the baby boomers,” Trump let him know that he thought it was “the worst review of a book in the history of publishing.”

Although Belis got his start in print, he spent the bulk of his career in television. Today he is the sole proprietor of GB Adventures, which he says is dedicated to “charitable fundraising, issue advocacy and noble causes.”

Belis studied journalism and political science at the University of Missouri. Anti-war demonstrations and the hippie craze characterized his student days. “My hair was almost to my shoulders at one point in my sophomore year at Mizzou,” he says.

Ruth D’Arcy was his favorite professor, an all-around mentor who nurtured him. They stayed in touch after he graduated until her death in 2005.

With D’Arcy’s encouragement he wrote long features for the Missourian; one of his stories chronicled the “Tom Sawyer” movie being shot in nearby Arrow Rock and included a couple of quotes from the 11-year-old Jodie Foster who was playing Becky Thatcher.

The School’s career offices assisted him in getting his first job at Fairchild Publications, a publisher of trade newspapers. The company sent a recruiter to the Journalism School looking for fresh talent, and the recruiter interviewed 25 candidates, narrowed it down to five who were flown to New York for additional interviews, and then hired Belis and one other candidate.

Belis says his Missouri Journalism degree and the knowledge he gained as a student has provided a foundation for him throughout his career.

“The best thing Missouri did for me was help me understand the importance of getting a story right,” says Belis. “Missouri graduates are known for thoroughness and are presumed to be good writers.”

It wasn’t easy for Belis to eke out a living on a reporter’s salary in New York City. Public relations, described by him as an “honorable profession and an important one,” offered greater salary potential, so he switched fields. He developed good positive relationships with reporters and the press over the years, he believes, with honest, straightforward interaction. And, a major part of the job comes from educating one’s senior management about the press rather than the other way around, he says. “It’s crucial to stress in internal meetings that the company always consider how a course of action is going to look on the front page of tomorrow’s paper.”

He was director of public relations for Fortune magazine, a Time Inc. property, for five years. “Time Inc. was and is a preppie culture,” he says. “And this Mizzou boy had no trouble keeping up with the Ivy Leaguers…MU’s core curriculum served me very well. I loved Time Inc. and thrived there.”

But after 10 years in the Big Apple, Belis was becoming increasingly uncomfortable with the New York quality of life. “My moment of epiphany came in 1988 when I was standing on the subway platform on a scorching hot day on my way to the office. My nice crisp dress shirt was soaked with sweat within 5 minutes, and I hadn’t even started the work day yet,” says Belis. “There were a couple of homeless men sleeping in the station, and a smell of urine in the air, and I thought: ‘I cannot live like this anymore. I am a human being.'”

Belis’ next career stop was in Knoxville, Tenn., where he did media relations for Whittle Communications. He was responsible for handling the promotion of a variety of media properties, including the launch of Channel 1, a news program that aired in middle schools and high schools.

When Whittle closed in 1994, he decided all of the best public relations/media jobs were in New York, and he moved back.

Belis discovered that the Mayor Giuliani-cleanup of the city had New Yorkers living like human beings.

His job hunt led him to TVB, the trade association representing the broadcast television industry. He was TVB’s vice president of communications for 15 years, overseeing the TVB website and writing everything from press releases to speeches for the TVB president. “I shaped the communications between TVB and all its core constituencies: the 600 individual member stations, the advertising community, the important trade reporters, and the Wall Street analysts who follow the television industry,” Belis says.

He says he enjoyed many things about his job, but the thing that kept him most interested were the challenges that came with being in an industry in transition with the introduction of the digital era. “I can’t say the glamour of the television industry wasn’t exciting as well,” he added. In social settings, he says, people seemed to take more of an interest in him when they heard he was in the television industry, more than they did when he was in any former position.

He attended the 1999 Golden Globes Awards in Los Angeles, and there encountered Jodie Foster for the second time in his life. He told her that he had interviewed her 25 years earlier on the “Tom Sawyer” shoot in Missouri, although he was sure she didn’t remember it. Foster replied: “What I remember about that shoot was the chigger bites.” Belis says today: “Now there’s an celebrity endorsement for you. A Belis interview: not as memorable as chigger bites.”

In 2012 Belis created GB Adventures. He considers himself to be a part-timer and takes his cue from Miracle Max, the retired wizard from “The Princess Bride” played by Billy Crystal. His business cards feature Miracle Max’s face and philosophy: “Go away. No more miracles! Well, MAYBE, for a noble cause.”

Numerous Missouri Journalism student groups have visited Belis during trips to New York. He considers assisting students to be an ongoing noble cause.

“Partly, it’s a generational obligation. When I graduated, I had zero student debt and owed all of $150 on a Chevron card; a student couldn’t get an ordinary credit card in those days. In my generation, the only people carrying serious debt into their working careers were doctors,” he says. “Today’s graduates are carrying massive debt, both from student loans and on credit cards, and they’re lugging what I refer to as ‘boulders in their backpacks.’ It’s an appalling burden on the millennials, and we boomers have a special responsibility to lighten their load.”

He also feels an obligation to Mizzou because the Missouri Journalism brand continues to help him. “The Missouri brand is still a major asset on my resume,” he says, “and I want to keep it shiny.”