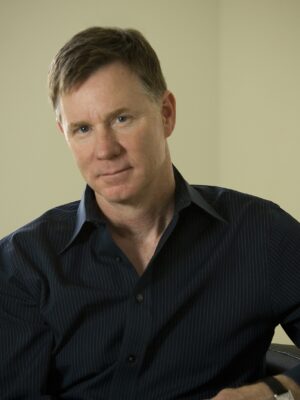 Gunshots ring out on a quiet street in Brooklyn, and two men fall to the pavement, bleeding and screaming. A director yells “cut,” and the actors return to their marks, ready to get whacked again. It’s a new series for Discovery featuring real hit men who’ve agreed to come out of hiding and tell their stories, which are then re-enacted by actors on the streets of New York.

The show is yet another outside-the-box reality television concept from Jim Berger, BJ ’78, and his company High Noon Entertainment. The creative powerhouse has more than 25 cable television shows currently on the air.

It was during a family vacation to California that Berger got his first taste of the magic of television. The grade school student sat in the audience for a live taping of The Carol Burnett Show, a popular comedic variety show.

“I remember sitting in the audience and just thinking, ‘Wow, television is pretty cool!'” recalls Berger.

After the show Berger knew what he wanted to do in life: Become an actor.

An Unconventional Path to the J-School

A St. Louis local, Berger spent much of his childhood with a hockey stick firmly grasped in his hand. When he was ready to head off to college after graduating from high school, the University of Missouri was establishing its first club hockey team. This made MU an irresistible and exciting choice.

Berger arrived at MU still eager to pursue a career in acting, and he enrolled as a performance major. He wasn’t on campus too long before he heard about the journalism program and its reputation for being one of the best journalism schools in the world. This, along with the extensive news media coverage of the Watergate scandal and the Vietnam War, encouraged Berger to make the switch from acting to journalism.

“The press was so influential during the 1970’s; it was such a great time for journalism,” Berger says. “It really influenced me and a lot of other students.”

Discovering His Passion for Photojournalism

One class in particular let Berger know what he wanted to do professionally. Photojournalism professor Leigh Wilson showed the class a reel of some of the work he had done for CBS.

“I remember how blown away I was,” Berger says about the experience. “I just thought, ‘Wow, that’s something that I want to do.'”

Wilson was a major influence for Berger. Wilson displayed a photograph in his office of him holding a camera while he filmed for CBS News in South America.

“That photograph embodied a romantic vision of what a network news photographer must be,” Berger muses. “It inspired me to devote my career to what I perceived as a non-stop adventure.”

Berger also took courses in radio, producing and reporting, but none of those compared to the creative outlet that photojournalism provided for him. Berger loved the art of filmmaking in a journalistic sense. He liked being able able to edit and use lightening to effectively tell a story.

“Plus I never had to dress up like my reporter and producer colleagues,” Berger adds humorously. “Wearing jeans was perfect for me.”

After college, Berger was determined to score one of the top photojournalism jobs in the country. Unfortunately he couldn’t seem to find a job.

“Everyone seemed to graduate with cool jobs,” remembers Berger. “Meanwhile, I graduated without one, and I was nervous.”

Not one to be discouraged, Berger took a chance. A classmate had tipped him off to a possible position at the CBS affiliate in Little Rock, Ark. The day after graduation, Berger jumped in his car and drove there as applicants had to apply in person.

The 375-mile trip from Columbia to Little Rock move paid off; he had the job within the week.

“I was elated,” says Berger about his success.

His time in Arkansas was not long. Berger moved to a station in Louisville, Ken., within three months. But before he had the chance to settle into his new role, a position became available at his dream station, the NBC-affiliate KUSA-TV in Denver. The station had just purchased a helicopter, Sky Nine, and they were looking for a cameraman. KUSA offered everything Berger desired in a job: an award-winning news team plus the chance to live and ski in Colorado.

Within 10 months of graduating, Berger had managed to work his way up the career ladder, from one of the last students to be employed, to working for what he considered to be one of the best news teams in the U.S. Even better, Berger was mentored for seven years by KUSA’s top-notch photojournalists.

The Establishment of High Noon Entertainment

In time Berger became an executive at Liberty Media. He was the president of TCI-owned Intro Television, with a reach of 19 million cable homes, and supervised Liberty’s holdings in emerging networks, including the Animal Planet channel.

Then the cable company began to make cuts and eliminated several divisions, including Berger’s. He and his staff were all out of a job, and Berger was back at square one.

Berger demonstrated his resilience yet again. One of his friends ran the Animal Planet channel and called Berger to ask a favor.

“If you have big characters with compelling storylines with drama and conflict, then chances are you will find a big audience,” Berger says.

“He called me and asked to create a series for him,” says Berger. “Animal Planet had just launched and needed programming.”

Berger created a series called “Emergency Vets,” which focused on an animal hospital, along with its veterinarians. The series was Animal Planet’s top show, running for five years.

Berger says his company has been a series of trials and errors.

“So many shows I’ve created that I thought would do well, did not,” Berger explains. “But many shows do hit, such as TLC’s Cake Boss and VH1’s Tough Love.”

Now, after 15 years of solid experience, Berger has figured out the formula to a successful show.

“If you have big characters with compelling storylines with drama and conflict, then chances are you will find a big audience,” Berger says.

TLC’s Cake Boss is a prime example of this winning formula. Berger met the show’s star Buddy Valastro after Valastro was a contestant on a food show. Berger went to Valastro’s bakery in Hoboken, N.J., met the staff and family, and was immediately captured by their big personalities.

Berger’s journalistic instincts kicked in, and he began rolling the camera, observing the organized chaos of the bakery. The footage sparkled. It had the conflict, lift and drama to make a successful show.

Missouri Grads, “The Best of the Best”

A visit to any of Berger’s three offices across the country will certainly guarantee a run-in with some hardworking, J-School graduates. High Noon has employed five Missouri journalism students within the past five years.

“When I tell my staff to give a Mizzou grad a look, they’ll sort of roll their eyes and be like, ‘Oh, boy, Jim’s going to make us look at Mizzou grads again,'” Berger says. “But I just firmly believe that they are the best of the best.”

“Students who come out of Mizzou know how to tell stories, and they can do it all on their own,” he says. “They know what their story is no matter what they do, and you can trust them to always go out and get the story.”

And so far, Berger has been spot-on as the staff continually report back to Berger full of praise about the students’ work.

Berger response is simple: “Yeah, they’re Mizzou grads.” Adding with a laugh, “I’m really placing all my bets in them, Mizzou grads can’t let me down.”

Berger has so much faith in Missouri journalism students that his company High Noon offers a paid summer internship every year, exclusive to the school’s graduates.

Berger knows the benefits of a Missouri journalism education, especially when it comes to his current line of work: reality and non-fiction television. The Missouri Method, which provides students with hands-on training in real-world media, provides a good foundation for non-fiction television. The most important concept it teaches students, according to Berger, is how to tell an effective story.

“Students who come out of Mizzou know how to tell stories, and they can do it all on their own,” he says. “They know what their story is no matter what they do, and you can trust them to always go out and get the story.”

Berger believes that the storytelling principles of producing, directing or editing cross over, no matter if you are making a show for the food network, VH1 or MTV.

Berger’s years of experience has taught him a key difference between people who receive a J-School education and those who do not.

“Some people who don’t come from the Mizzou rigor of storytelling are trained as studio cameramen and studio producers,” he says. “They are overly directed and don’t really have a chance to think for themselves. They have to have other people tell them what to do. I think that’s the fundamental difference.”

Berger enjoys returning to MU and reminiscing about his old university days as he wanders throughout the grounds.

“It’s so much fun because the campus is bigger, it’s a lot more shinier and sparkling with new buildings,” Berger says fondly. “But you can still see the same buildings and get the same vibe of the campus from 35 years ago.”

Jessica Goodwin is an exchange student from Macquarie University in Sydney, Australia. She will return to her home country to complete her bachelor of media degree in 2012.