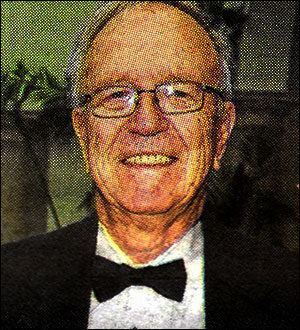 What do you do?
I am retired.

How did you get your job?
Perseverance. After being decommissioned from the Navy in WWII, I went to Denver, where I was determined to become an editorial cartoonist on The Denver Post. (Their editorial cartoonist was in his seventies, doing seven cartoons a week plus an oil painting for the Sunday Magazine.) My campaign consisted of bringing in samples of my editorial cartoonist work once a week and handing them to the managing editor for his reaction. Meanwhile, as a back up plan I applied to the University of Missouri School of Journalism to study editorial cartooning on the GI Bill of Rights. The upshot was that The Denver Post got tired of looking at my samples and took me on as a staff cartoonist and, had that not happened, I would have gone back to MU because they accepted my application. Later, when I signed on as editorial cartoonist for The Atlanta Journal I got that job through personal contact with an editor I knew.

What is the best professional lesson you learned at the J-School?
Some (maybe most) J-School grads have something lined up after graduating. I was an ad major with not a ghost of an idea where I would find work. WWII solved that problem, of course, and by its end I knew I wanted to be an editorial cartoonist. My point is this; the lesson I learned at J-School, with its broad curriculum in so many aspects of the communication industry – I wrote news stories for the Missourian and I sold ads for the Missourian – is that the more multifaceted you are, the better your chances for success. When I left the Denver Post to live in Mexico City as a student of Mexico City College, I sold feature articles about Mexico to the Denver Post, illustrated with cartoons I drew.

What advice do you have for current students?
Don’t graduate like I did; get involved in the field of your choice during the summers, and even before you come to Columbia. Have definite goals and targets.

What is your favorite J-School memory?
I did a sports cartoon for the Missourian that I was thrilled about.

Any additional comments?
Life is unpredictable. You may think it is predictable, but it is not. In the end, I left the creative side – beside editorial cartooning, I had two comic strips syndicated – for a career in newspaper syndication, calling on editors all over the U.S. and Canada, from Ben Bradlee at The Washington Post on down. That class in J-School, selling ads, had a rationale I certainly didn’t appreciate at the time.