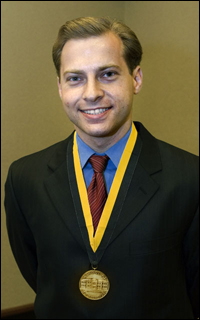 What do you do, and what is most interesting about your job?
I am an investigative reporter for the KHOU 11 News I-Team in Houston. Coming to work each day is an absolute thrill. It’s one of the only jobs around where you have a real chance to right wrongs and see an immediate, positive impact on your entire community because of work you’re involved in.

How did you get your job?
I worked my way up through small markets in television. After graduating from Missouri in May of 2000, I started out working as a general assignment reporter for the NBC affiliate in Colorado Springs, Colo. I worked on my off days on investigative projects that interested me. I paid my own way to investigative conferences where I could model myself after the best in the country. Pretty soon, I got promoted to the I-team in Colorado Springs. After I uncovered a few stories that changed a number of Colorado laws, the NBC affiliate in Fort Myers, Fla., asked me to start and lead a new investigative unit they were creating. I worked as hard as I could in Florida to develop strong storytelling skills and cutting-edge research skills. After I hit on a couple of stories that prompted action from Florida Gov. Jeb Bush and even from Congress in Washington, D.C., KHOU-TV in Houston took notice of my work and asked me to join their investigative unit.

What do you consider to be your greatest professional achievement?
While there’s no doubt that the most meaningful stories to me are those that really help expose an injustice – or correct something that may threaten individuals or communities – maybe it’s best to address this question with the best example I can think of that has a good Mizzou tie to it. So here goes. Recently, I was humbled and incredibly honored when the Livingston Awards for Young Journalists named me one of the nation’s top journalists under the age of 35. The judges included some incredible journalists from print, radio, and television, including two journalists who I once met when I was a student at Mizzou – Tom Brokaw of NBC News and Christiane Amanpour of ABC News (then of CNN). They were each in town, during separate visits to the University, to accept a Missouri Honor Medal. While visiting, they took time out from their whirlwind schedules to talk with me and to offer advice about dedicating my career to “serious” journalism. They freely offered great pointers on how to set on a path to do just that. Years later, in accepting the Livingston award in New York, they sat in the audience as I mentioned how I hoped they each knew how much I appreciated the time they spent with me during their visits. I mentioned how much impact their advice had and how hopeful I was that others in the room would always take time out to mentor and foster future generations. Before sitting down, I mentioned something off the cuff about now feeling a tremendous amount of “pressure,” considering what the Livingston’s aim to stand for. Christiane, a former Livingston winner herself, then got up in front of the room to introduce one of the other winners that year. But before she proceeded to do so, she stopped to offer one more comment/piece of advice that will probably forever bring chills down my spine in recalling the moment, as she sternly reminded me in front of the entire room that, “Pressure, Mark, is a privilege.”

How do the findings of an in-depth report move from being a story to making a difference?
A strong investigative report is well-researched and is told in such a way that it prompts decision-makers to want to stand up after watching your story on television, and shout from the top of the nearest mountain until something gets changed. It reveals not only the problems, but also potential solutions. It is up to journalists to make sure they ask very hard questions of high-level officials who are responsible for a problem. Then, if journalists don’t get a satisfactory answer, they should seek out responses from the agency or lawmaking body that oversees the group they are investigating. Often times, the only way to force action is by making sure the right people know about the problem you’ve uncovered.

What’s the value of working together with the other KHOU I-Team members?
The other KHOU I-Team members are some of the smartest and most talented journalists I’ve ever encountered. We all help make each other better on a daily basis. Some of us have strengths where others are weak. When you are trying to tackle some of the most complicated issues of our time, or when you are trying to go up against some of the most powerful institutions in the country, it is imperative you have as many minds brainstorming on the best way to investigate and eventually tell the story in a fair manner.

What does the Missouri School of Journalism mean to you?
The Missouri School of Journalism probably fast-forwarded my career by 10 years by offering me opportunities I simply could not get anywhere else. The day I graduated, I already had three years experience reporting for a commercial television station (KOMU). While my friends across the country were covering news about campus events at their schools, I was convincing the U.S. Air Force to let me take a television camera inside the cockpit of a B-2 stealth bomber for the first time in history, and also working on investigative projects that would eventually change Missouri law. Because the group “Investigative Reporters and Editors” (IRE) is also headquartered at the School, I had access to the files from the best investigative organization in the world that helps journalists find and tell better stories. Students who want to succeed at Missouri have all the tools right there in front of them-it is just a matter of how much they want to take advantage of them.

If you could change one thing about the path you took to get where you are, what would it be?
I would change having to live through and report in the icy winter weather in mid-Missouri. I remember walking along campus on the way to class one day when I hit a sheet of black ice, saw my legs above my head only for a brief second, before my books went flying out in all directions right in front of the J-School and about 40 of my classmates.

What is one thing you wish you had done at Mizzou?
Cheered louder when the Tigers beat Kansas in basketball games. I’m ashamed to say I still had a bit of my voice left over the morning after one of the times Missouri upset a highly-ranked Jayhawk team.

What did you want to be when you were a kid?
I wanted to be a sports broadcaster. I actually came to Missouri thinking that’s what I was going to be. I switched gears one Sunday afternoon when I was filling in on a news reporting shift at KOMU-TV for a friend who couldn’t work his shift that day. I did a story about a 7-year-old girl with cystic fibrosis. After it was broadcast, the station started getting calls from viewer after viewer who wanted to help the young lady and the Children’s Miracle Network who assisted in her medical care. It was a life-changing moment. I immediately saw the power and the potential of television news. When it is done right, it can prompt positive action that improves lives and can sometimes re-shape an entire community.