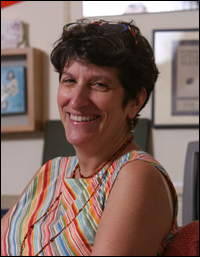 What do you do?
My business, Merrill Perlman Consulting, offers training and consulting on everything from reporting, writing and copy editing to corporate workflow, communications and recruiting. I’m also a freelance editor, with clients including book publishers, news outlets and private companies. I’m an adjunct assistant professor at the other Columbia, at the Graduate School of Journalism of Columbia University in New York, and I write the “Language Corner” column and blog for the Columbia Journalism Review. I’m also president of the American Copy Editors Society Education Fund, which offers scholarships for students interested in copy editing careers.

What are you currently working on?
I’ve just finished copy editing a book of obituaries that appeared in The New York Times. I’m also editing some very interesting Kindles Singles, and I just came back from presenting some training on headline writing at a news organization in the Midwest.

Best professional lesson learned at the J-School?
Constantly ask questions and be aware of everything that is going on around you.

What do you consider to be your greatest professional achievement?
In my 25 years as an editor at The New York Times, I helped to recruit and hire more than 65 editors, including more than a dozen who went on to become assistant managing editors or department heads at The Times. And while I was director of copy desks at the Times we won several national headline-writing awards from the American Copy Editors Society.

What is your favorite J-School memory?
JoAnne Dickerson. JoAnne Dickerson taught editing when I was there. She had just succeeded Bill Bickley who passed away the year before I got into the J-School. I wanted to be a reporter and I still wanted to be a reporter when I got out, but she stood up in front of the editing class and, in incredibly passionate tones, described how editing was the best thing a journalist could do; that every story was your story; that you had far more involvement and impact as an editor on a newspaper than you did as a reporter because you dealt with so many more things and that doing the right thing by those stories meant so much more than doing the right things by writing the stories. It was the most motivating thing I ever heard journalistically up to that point.

What is your professional history, in a nutshell?
I reported professionally for four years before I turned to copy editing because I knew what computers looked like. MU put two computers in the Missourian my senior year (73-74). They were among the first in newsrooms anywhere (the mainframes took up a whole room), and I trained people how to use them. At my first paper, the Southern Illinoisan in Carbondale, computers came in around 1978. I was the only one who had ever seen one. They asked me to become a copy editor to use it, thus doubling the size of the copy desk, to two. I’ve been in all areas of editing professionally since 1978: copy editor, assistant business editor, copy desk chief, assignment editor and the like. I spent four years at the Southern Illinoisan and four years at the Des Moines Register before coming to the New York Times as a business copy editor in 1983. (I’m proud of my small-paper experience and its proof that small papers are not dead-ends.) I was the Metro copy desk chief when the Times won a Pulitzer for coverage of the 1993 bombing of the World Trade Center. I was at the Times for 25 years before taking a buyout in 2008, when I was the director of copy desks, in charge of more than 150 copy editors at the Times.

What advantages did a Missouri journalism degree give you?
Practical experience. I knew how a newspaper operated. I knew what the various roles were. The combination of the practical skills and the intellectual discussion made me far more well rounded than people who did not go to journalism school or people who went to journalism school but did not have the lab facilities that Missouri has, like the Missourian.

What did you cover as a reporter for the Missourian?
I wrote for the Missouri for two terms, one term on general assignment. My greatest achievement then was when the Woolworth on Broadway burned down. I was rewrite. Reporters went out to the scene and they all came back and reported to me and I wrote the story. So I was the lead story in the Missourian the next day. I was also on an investigative team with the legendary Tom Duffy covering health services. One of my co-reporters was a nun who was in J-School. One of the big issues at the time was contraceptives which the University Health Services firmly did not yet believe in. It was a fascinating time to be discussing women’s health issues and to be reporting them with a nun. I was also on the editorial board and the copy desk.

What advice would you give a MU journalism student who aspires to work for the Times?
One of them would be, don’t expect to start at the Times. But do the best work you can regardless of where you are. Cream does rise to the top; we find people at the oddest places and small papers. Every paper, no matter how bad or how good, has good people working there. You have to find those people and learn from them.

What characteristics are important for people who want to work in journalism?
Intelligence, curiosity, and a gift for the examination – in other words asking questions such as “how does this work and/or how does this compare with what I know or what I’d like to know?” Also the ability to articulate and translate, meaning the ability to take what someone tells you and make it understandable to other people.

Journalists are typically voracious readers of news; what do you read and what Web sites do you check?
I don’t have as much time to read as I used to, but obviously I read the Times. I at least browse the Wall Street Journal and the local newspapers. If I get the chance to go to the Washington Post Web site or the LA Times Web site, I do. I get a lot of non-fiction magazines such as the Smithsonian, Natural History, Washington Monthly and whatever I can get my hands on usually. When reading fiction, I tend to lean toward junk mysteries because it’s a relaxation as opposed to heavy stuff. I have never read The da Vinci Code, and I hope I never will.

What is your all-expense-paid dream assignment?
Helping copy editors at the Times through some tough times was one; now, I have the best job in the world, because I can do so many interesting things – and say “no” to those I don’t want to do!

Do you keep up with your fellow J-School grads?
I do; a whole number of them who are here. At the Times, Missouri J-School graduates are absolutely everywhere. At the wall of offices where I sit there are 10 offices and three of them are occupied by Mizzou graduates.

What advice would you give a reporter who wants to become an editor?
First of all know your publication’s style and stylebook because a reporter who wants to become an editor has to be able to put aside “writerly” impulses, meaning writing something to make it sound like you. The best editors are chameleons; they can add to the tone of whatever writer they are editing at that moment. Any changes they make are done in the writer’s voice and not in the editor’s voice. So they have to put all that sort of stuff aside. Also, you have to be prepared to work in the office a lot, long hours, both nights and weekends.

What does the Missouri School of Journalism mean to you?
Everything. It gave me focus, it gave me skills, it gave me passion. It gave me not just the tools to do a good job, it gave me the job of doing a job. It made me understand how important good journalism practiced well is. Not to the individual, but to democracy.