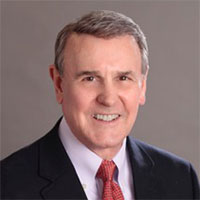 Growing up in the rural and friendly community of Albany in northwest Missouri, Pat Patton, MA ’71, learned the value of small-town kindness at a young age. The town was a tight-knit agricultural community with few strangers and many friendly faces. Patton and his family never had to worry about locking their doors or forgetting someone’s name if they ran into them in town.

After more than 40 years spent working in television management and production, Patton is now retired and lives in San Francisco. He continues to use his connections in the industry to help television broadcasters find new job opportunities in journalism’s ever-changing landscape.

Fostering an Interest in Television

Patton’s interest in television was first piqued when he was in high school. Local high school students were invited to KQTV in St. Joseph, Missouri, an hour southwest of Albany, to participate in the station’s weekly “Let’s Dance” program.

“Let’s Dance,” was a localized adaption of “Dick Clarke’s American Bandstand,” showcasing the popular songs of the era. Patton was mesmerized as he absorbed the choreographed ballet of cameramen, stagehands, talent and producers working together to create the show.

As he watched the behind-the-scenes efforts that went into producing “Let’s Dance,” Patton knew that he wanted one day to work in the exciting field of television. Eventually, this experience guided Patton’s interest in obtaining his master’s degree in broadcast journalism from the Missouri School of Journalism in 1971.

Patton began his collegiate career in 1961. The idea of leaving his small hometown for a large, competitive university seemed daunting. So, Patton looked to smaller liberal arts schools and found a good fit in Westminster College, a liberal arts school only a few hours from home.

“I wanted to go to Westminster because I honestly felt more comfortable there,” Patton says.

Located in Fulton, Missouri, Westminster was an all-male college of approximately 600 at the time. It proved to be a perfect fit for Patton. He enrolled in the ROTC and pre-med programs and contemplated attending medical school after graduation. However, after receiving a poor grade in his introduction to chemistry class his freshman year, Patton quickly realized that his talents were not well suited to science.

“It’s funny that I wanted to be a doctor then because my daughter is now a very successful anesthesiologist,” Patton says. “I guess that talent skipped my generation.”

Patton eventually switched his major to English, partially based on influential advice from a family friend and newspaper publisher Jack Stapleton. Stapleton recognized Patton’s talent for writing – Patton had won awards for writings in high school and at Westminster – and it was Stapleton who persuaded Patton to pursue a career in journalism.

Patton came into the School of Journalism with a bachelor’s degree in English. He needed to complete several introductory journalism classes before advancing to his upper-level courses.

Patton began his studies when technological changes allowed for news stories to be broadcast more quickly, accurately and efficiently. Color broadcasts were superseding black-and-white ones. The film and cutting techniques used to produce news clips were being replaced with videotape and digital editing.

Newsgathering methods were also changing, Professor Emeritus Rod Gelatt recalls. Gelatt spent more than 30 years of his career working at KOMU-TV, mid-Missouri’s NBC affiliate and the only university-owned commercial television station in the United States that uses its newsroom as a working lab for students. Gelatt worked with students like Patton while ushering in many of these important changes at the station.

Gelatt remembers a comparatively primitive era for broadcast journalism in the early 1970s. Manually-operated studio cameras were heavy and bulky. B-roll film was cut with a razor blade and patched together for broadcast later in the day. There was little competition among networks.

Benefitting from the hands-on approach of the Missouri Method, Patton learned to effectively manage and produce in the newsroom. He coordinated story production and timelines with reporters. He learned how to operate audio and video equipment on the studio floor and how to direct a newscast in the studio. He gained behind-the-scenes experience both recording and producing news promotions and editing programs for broadcast.

“Patton was one of our stars in broadcast management during this time,” Gafke recalls.

“I always thought Pat had a great leadership style and was perfect for broadcast management,” McCombs says. “He’s a forward-thinking person and has always been committed to the development of people, as any good manager should be.”

Patton and Johnson’s findings ultimately made it possible for smaller stations to do these ascertainments themselves to avoid the expense of using research firms. Community ascertainments were eventually phased out during the deregulation of the telecommunications industry in the 1980s. Regardless, Patton and Johnson’s research was instrumental in giving smaller stations the power to carry out their own research and analytics reports.

A Lifelong Missourian Steps Out of His Shell

Within a year of graduating in May 1971, Patton moved to San Francisco as a management trainee hired by Westinghouse to begin his first job in broadcast production and management at KPIX-TV, a CBS affiliate station.

Patton coordinated and managed story assignments between the station’s reporters and editors, assembled daily newscast shows and produced various on-air content for the studio, among other duties.

Over the next eight years, Patton took advantage of professional opportunities to assume increasing management responsibilities. He worked at television stations in Baton Rouge, Louisiana, and Kansas City before beginning a 20-year stint at KMBC-TV in Kansas City in 1983. There, Patton oversaw successful programs like “PM Magazine” and helped to bring new syndicated programs like “Oprah” to the station.

Then in 2001, Patton received a call from Dino Dinovitz, former general manager at KMBC. Patton had been his program director for more than ten years. Dinovitz was now managing KRON-TV in San Francisco and asked Patton to join him to be KRON’s director of programming. It was simply an offer too good to pass up.

It didn’t take long for management challenges to surface at KRON. Less than a year after Patton moved back to San Francisco, NBC pulled its affiliation with the station after a long series of disputes. The now-defunct Young Broadcasting LLC had purchased the station, and Patton took on additional managerial roles for KRON-TV and Young Broadcasting LLC. Despite the setback, KRON-TV continued to broadcast as an independent station before becoming affiliated with the myTV Network in 2006.

Patton helped to spearhead the transformation of the KRON-TV brand into a prominent Bay Area news leader both on-the-air and on burgeoning social media platforms in the mid- to late-2000s. Using the skills he learned at the Missouri School of Journalism more than 30 years earlier, Patton helped the station’s news and programming retain its market prominence in the quickly-changing field of broadcast journalism.

“KRON-TV was one of the stations that was really at the forefront of how news and reporting were changing in the mid- to late-2000s,” Patton says.

KRON-TV was one of the first local news stations to embrace the Internet and social media as reporting tools. The station established a dedicated social media department, pioneered convergence reporting methods and made a concerted effort to post news packages both online and on social media. Moreover, the station also focused on airing in-depth, investigative journalism stories.

Patton especially remembers an investigative story the station did about homelessness in the Bay Area. The reporter found that many people who appeared to be living on the streets were actually posing as homeless. Some of the more successful ones even made upwards of $75,000 a year in cash by panhandling.

“It was really a whole learning experience for me to see how dishonest some people really could be,” Patton says. “Even living in San Francisco now, recognizing that not all people here are truly good is something that I continue to learn each day.”

Still Busy, Even in Retirement

Patton retired from KRON-TV at the end of January, 2015 after more than 40 years spent working in television broadcast and management. He is not the type who can sit still for too long.

“I think that over time and especially throughout my career, I’ve come to realize that becoming more worldly is something that I continue to have to learn every day,” Patton says.

In retirement, Patton is able to continually broaden his knowledge of the world, especially through frequent trips with his wife to her native Ireland. Patton enjoys golfing and jokes that he likes to keep a set of clubs in the trunk of his car.

Patton stays connected to the broadcast industry, sometimes helping those in his network find opportunities that interest them. This satisfies Patton’s belief in the importance of paying it forward.

“I’d like to think of myself as a client representative,” Patton says. “I really enjoy helping all these people find a job doing something that they love.”

Patrick LeBeau is a senior at the Missouri School of Journalism with an emphasis in strategic communication. LeBeau has long been fascinated with meeting and talking to new people. Perhaps this explains his interest in the field of journalism. He has previously held a promotions and marketing internship at KOMU-TV and a communications internship at the Greater Chicago Food Depository. LeBeau plans a career in communications and marketing in the nonprofit or automotive sectors following his graduation in May 2016.