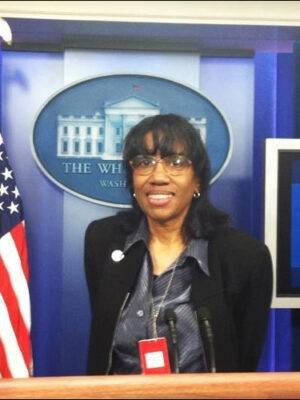 Phillis Barbara Dent anxiously awaited her turn to jump. She was more than two miles above ground level and soon would feel 115 mph winds rushing past her ears, against her face and working against gravity to extend her free fall.

After a 60-second free fall, Dent pulled the cord on her parachute and drifted to earth. Dent, an adrenaline junkie, accomplished a big goal: skydiving solo.

It was not, however, something she could ever talk about as part of the summer internship that the Missouri School of Journalism had helped arrange for her at the San Bernardino Sun in Southern California.

Although there were no official rules against skydiving, the Sun city editor had made it clear to Dent that the Gannett-owned company frowned upon risky weekend adventures. So, she remained silent.

“Phillis was just such a boring name for a writer. I mean, everybody was named Phillis,” she says. “Skye Dent was perfect.”

Dent’s path prior to attending the School of Journalism included working as an Associated Press radio copy editor, a daily newspaper staff writer and earning a bachelor’s degree in Latin American Studies from Brown University. Dent says it was the internships acquired through the Missouri School of Journalism while a master’s student, however, that helped advance her career.

Dent’s fearless spirit propelled her into a multi-dimensional professional life that included being a writer for major televisions shows such as “Star Trek Voyager,” a CBS News journalist, a producer-writer of Discovery Channel documentaries and a professor at the University of North Carolina.

A Lifetime of Learning

Dent was a staff writer at the Cape Cod Times when she noticed the influence of movies on journalism. The lives of journalists in films such as “The Killing Fields,” “All The President’s Men” and “The China Syndrome” were portrayed as being of great importance, and she believes this portrayal sparked more people to pursue careers in the field.

In order to remain competitive with this influx of journalists, she dropped out of the market for two years to pursue her master’s degree at the Missouri School of Journalism.

In Dent’s mother’s home country of Belize, families paid for the education of their children. So, when Knight’s father died when she was in the eighth grade, so did her education.

At the age of 20, Dent’s mother immigrated to the United States, hoping to make a career of her beauty pageant success. Instead, she ended up taking care of a family’s children and cleaning their house for $10 a week.

If not for jobs on the railroad, Dent’s father, who also had only an eighth grade education, might never have made it out of Meridian, Mississippi, the site of the shooting of three civil rights workers by the Ku Klux Klan.

“They felt like education was going to be our way out of the projects,” Dent says. “We [Dent and her siblings] always felt somehow that we had to do well because our parents had sacrificed so much and didn’t have the educational opportunities we had.”

Dent’s parents relocated the family to a small house in Boston, where she remembers all the neighborhood kids would come home from school and do their homework, no questions asked.

And try she did. Dent says her eighth grade English teacher Jean O’Brien changed her life by introducing her to journalism. Dent became the editor of the school newspaper, The Curley Que. Noticing her student’s potential, O’Brien found funding through the A Better Chance nonprofit organization to finance a private high school education for Dent.

O’Brien made a lasting impact, although it would be years before Dent had the opportunity to thank her in person.

Although many people obtain their master’s of fine arts degree prior to selling scripts and working on film sets, Dent did the reverse. In 2005, after working on several film sets, Dent left a budding Hollywood career to obtain a MFA degree in writing and production from Tisch School of the Arts at New York University.

“What most people fail to realize is that journalists are inherently teachers,” Dent says. “The original goal of journalists is to inform the public so that it may govern, which is really the same role as education.”

While there, Dent signed on with the William H. Cosby NYU Future Filmmakers Workshops where she taught filmmaking to the kind of gifted lower-income high school students that she once was.

Upon graduating with her MFA, Dent began teaching journalism, filmmaking and screenwriting at the University of North Carolina.

“What most people fail to realize is that journalists are inherently teachers,” Dent says. “The original goal of journalism is to inform the public so that it may govern, which is really the same goal of education.”

Based off her experiences with the hands-on Missouri method, as a professor Dent strives to pair her passion for education and skills as a journalist to enhance the learning environment beyond the classroom.

For example, Dent created the J-Student White House Invitational in 2012. She singlehandedly raised the $5,000 needed to take a group of 14 UNC writing, journalism and public relations students on a three-day trip to the nation’s capitol. There, they participated in a daily press briefing with White House Press Secretary Jay Carney, privately interviewed Carney in his office, got tips from White House reporters and interviewed journalists at American University’s NPR station.

Breaking into Television and Film

Throughout the years, Dent had continued to take classes, further sharpening and developing skills that made her attractive to employers.

For example, in 2002, Bob Reid, vice president of primetime production at the Discovery Channel, gave Dent the opportunity to begin working with documentaries. Dent quickly voiced her concerns about her lack of documentary training to Reid. He assured her that she was exactly what Discovery needed – a storyteller with research and journalism skills.

Dent was hooked after the first documentary and was hired to write six more. Projects for AMC and PBS followed. Additionally, Dent worked with Discovery Channel and Paramount Studios to create network television commercials, proving that her journalism skills could transfer to various professional settings. Dent believes that each opportunity is a learning experience.

Dent has also used her journalism experiences in her work as a writer on the television shows “Star Trek Voyager,” “The Burning Zone” and “Dirty Sexy Money.”

She says that many of her story ideas are inspired by news stories. For example, a screenplay titled “Ashes” that she wrote while working as an ABC Studios screenwriting fellow incorporated knowledge about firefighting garnered while covering multi-acre grass fires as a Southern California journalist.

While working on “Dirty Sexy Money,” Dent noticed a news article about the bones of slaves being discovered beneath buildings that were being torn down in New York City. When one of the key producers of the show said they needed a reason to justify the takeover of New York buildings by a villain character, Dent came up with a storyline involving the character secretly trying to unearth these bones and slave badges so that they could be buried properly. Executive producers incorporated Dent’s idea into the series story arc.

Currently, Dent lives in Berkeley, California, and is an adjunct professor at Diablo Valley College. The teaching position allows her to keep working on other projects.

With the advance of new media, the courses Dent teaches have expanded to include social media, media law, multimedia, content strategy and writing for the Internet as well as narrative material for the Internet and mobile media. Dent also just received a federal training grant to obtain a digital video and non-linear editing certificate.

“It’s an ever-changing world, and if you want to stay in demand you have to change with it,” Dent says. “I was always seeking new challenges. And I love technology. So for me, nothing’s changed.”

Dent recently teamed up with actor Dennis Haysbert and director/cinematographer Krishna Rao on a five-minute short film noir Kickstarter project called, “The Dame on the Train.” The setting, in the cooking area of a 1950s train, was inspired by her father’s work. Dent hopes it will be picked up and developed into a TV series.

A romantic comedy screenplay titled “Ex Appeal,” which features a science journalism character, was a 2014 Sundance screenwriting finalist. Director Michael Cuesta plans to match the screenplay with a producer.

After optioning the remake rights to the 1982 Sidney Poitier film “Warm December” and writing a screenplay in homage to Poitier, that screenplay, “December,” was optioned last year by Griot Entertainment.

Throughout the years, Dent has continued to write journalistically as a freelancer for publications such as The Boston Globe, Documentary Magazine, the Writers Guild of America monthly magazine and The Fayetteville Observer.

“I don’t want to give up journalism, filmmaking or teaching,” says Dent. “So far, by blending all three, I haven’t had to. Here’s hoping my luck continues.”

With education as the current driving force of her professional life, Dent encourages current journalists and students to network as much as possible because opportunities may come from anywhere and everywhere at any time.

Liz Skretkowicz is a senior strategic communication major from Memphis, Tennessee. She has been involved with several campus organizations including Kappa Delta sorority, the Wellness Resource Center and Tiger Pantry. Skretkowicz has been on the dean’s list every semester and says her favorite part of the Missouri School of Journalism is the professors she has worked with.