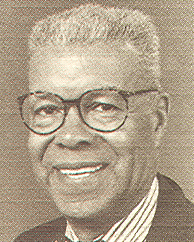 Chuck Stone is the Walter Spearman Professor of Journalism and Mass Communications at the University of North Carolina-Chapel Hill. Stone previously served as a professor of English at the University of Delaware and a visiting professor at Syracuse University and Trinity College. He has worked as a senior editor at the Philadelphia Daily News, as editor of three African-American newspapers, a syndicated columnist, and a PBS television host. He was the founding president of the National Association of Black Journalists and a co-founder of the National Center for Fair and Open Testing. During the course of his career, he has served as a go-between the police an d75 murder suspects. He has successfully negotiated five hostage crises. In 1996, he was selected as one of 500 community leaders to carry the Olympic torch during its summer cross-country tour. An author of three books, Stone is currently working on four more: an anthology of Walter Spearman’s works, a study of First Amendment court decisions, a collection of African-American sermons, and a book on Delaware communications law.